Syria Daily, Oct 8: US Steps Up Airstrikes Near Kobane — But Will They Matter? 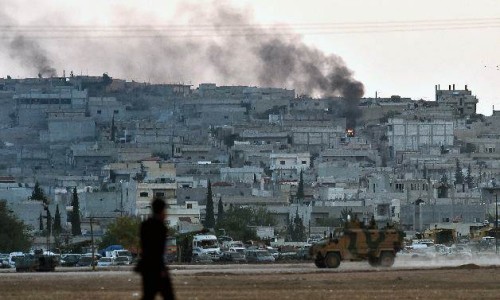 US Officials — “Not Major Concern” If Kobane Falls to Islamic State
Turkey Feature: 14 Killed in Kurdish Protests Over Syrian Town of Kobane

UPDATE 1820 GMT: Kurdish sources in Kobane have injected a note of caution about the pushback against the Islamic State in the town.

Journalist Jenan Moussa, in a question-and-answer session on Twitter on Wednesday night, posted:

A: Kurdish fighters say planes helped to stop ISIS advancing. But not enough to push them back. <

UPDATE 1800 GMT: France has said it will support Turkey’s proposal for “safe havens” for Syrian refugees, while the US and Britain have said they are willing to “examine” the idea.

Paris announced its backing after a phone conversation between French President Francois Hollande and Turkish counterpart Recep Tayyip Erdoğan on Wednesday. “[Hollande] voiced his support for a proposal brought by President Erdoğan to create a buffer zone between Turkey and Syria for hosting and for the protection of the displaced persons,” said a statement issued by the French Presidency.

In Washington, US Secretary of State John Kerry told reporters after a meeting with British Foreign Secretary Philip Hammond that “the buffer zone…is an idea that’s out there, it’s worth examining, it’s worth looking at very, very closely”.

“We are at the stage of exploring this,” agreed Hammond. “We’d have to explore with our other allies and partners what is meant by a buffer zone, how such a concept would work. But I certainly wouldn’t want to rule it out.”

However, the US military declared the buffer zone “is not on the table now as a military option under consideration”, according to the Associated Press.

UPDATE 1545 GMT: Idris Nassan, the Deputy Foreign Minister of the Kobane canton, said Islamic State forces have been pushed back after US-led airstrikes:

They are now outside the entrances of the city of Kobane. The shelling and bombardment was very effective and as a result of it, IS have been pushed from many positions.

“This is their biggest retreat since their entry into the city and we can consider this as the beginning of the countdown of their retreat from the area.”

UPDATE 0815 GMT: General John Allen, the US special envoy for the campaign against the Islamic State, will hold talks with Turkish officials on Thursday and Friday.

UPDATE 0745 GMT: An official of the Syrian-American Council has said “the highest levels of the U.S. government” have not responded to appeals to arm Free Syrian units fighting in Kobane against the Islamic State.

Mohammed Alaa Ghanem said he and other officials had been communicating the request for weapons for three weeks to the Obama Administration.

However, he said that the commander of the 1,500-member Ar-Raqqah Revolutionary Brigade, fighting alongside the Kurdish forces in Kobane, had received nothing.

The commander said he had had to send away at least one-third of his fighters because of limited food supplies in the town.

The US-led coalition has escalated airstrikes near the Kurdish center of Kobane in northern Syria, following the entry into the town by Islamic State forces after a four-week offensive.

Between 7 and 10 airstrikes were reported by journalists observing the fighting from the Turkey side of the border. US Central Command acknowledged five missions on Monday and Tuesday against Islamic State positions.

The BBC’s Paul Wood, just across the border in Turkey, said Kobane was “relatively quiet” on Tuesday after the battles the previous day, when the Islamic State moved into eastern sections of the town.

Syrian Kurdish fighters said the strikes were the most effective yet but should have come much earlier. Kurdish Syrian Party leader Salih Muslim said the situation remained very serious:

There is heavy fighting going on by [Kurdish] YPG forces and they’re trying to defend the civilians. There is a very large operation against them.

Turkey’s Prime Minister Recep Tayyip Erdoğan also said the airstrikes would not be enough to save Kobane, the capital of one of three Syrian Kurdish cantons:

I am telling the West – dropping bombs from the air will not provide a solution. The terror will not be over…unless there is cooperation for a ground operation.

However, there was no sign on Tuesday of intervention on the ground, even as Turkey put tanks and troops on its side of the border. Kurdish officials said that they do not want Turkish ground forces — instead, they are calling for essential weapons to counter the Islamic State’s armor and artillery and for unimpeded passage of Kurdish fighters from Turkey into Syria.

A local journalist has told Syria Deeply of 11 conditions set down by the Islamic State for reporters who wish to continue working in the area.

The correspondents must swear allegiance to the Islamic State’s “Caliph” Abu Bakr al-Baghdadi. They will be supervised at all times by the Islamic State’s media offices — while they can cover events without referring to the offices, they must consult them before any broadcast or publication. The offices must also have the detail of any social media accounts of the journalists.

The journalists can work directly with international news agencies such as Reuters, Agence France Press, and the Associated Press; however, they must avoid all international and local satellite TV channels, includin “blacklisted” outlets like Al-Arabiya, Al Jazeera, and Orient News.

Any violation of the rules will lead to the suspension of the journalist and he will be held accountable”.

The Islamic State also said, “The rules are not final and are subject to change at any time depending on the circumstances.”

Some journalists signed the terms of agreement. Others did not and have fled the area.

Sigrid Kaag, the official overseeing the handover of Syria’s chemical weapons, has told the UN Security Council that the Assad has declared four facilities which it did not mention during the process between September 2013 and June 2014.

Kaag represented the Organization for Prohibition of Chemical Weapons and the UN in the operations to destroy Syria’s stocks following the August 2013 chemical weapons attacks by the regime near Damascus.

The US Ambassador to the UN, Samantha Power, responded to Kaag’s revelation via Twitter, “Must keep pressure on regime so it doesn’t hide CW capability”.

With all 1,300 tons of declared chemical weapons removed, the OPCW is now seeking to dismantle chemical weapon facilities. Work on the first of the 12 begins this month, with the goal of demolition by the end of November.

US Vice President Joe Biden called Saudi Arabian Foreign Minister Saud al-Faisal on Tuesday to “clarify” his remarks last week that the Saudis supported “extremists” in Syria to pursue the overthrow of President Assad and a “Sunni-Shia proxy war”.

See Syria Video: US VP Biden “Our Allies Were Our Biggest Problem. They Bolstered Extremists”

A White House official said the Vice President thanked Prince Saud for Saudi Arabia’s cooperation in the international coalition against the Islamic State.

The official asserted that both officials agreed the issue was now closed.