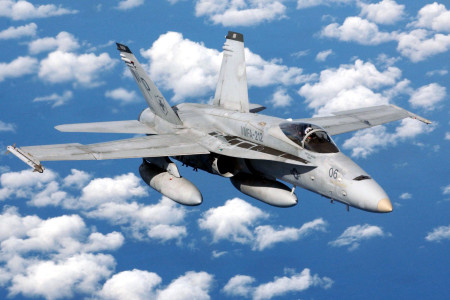 Audio Analysis: The US Airstrikes — “It’s What Happens on the Ground That Is Important”

UPDATE 1930 GMT: One of the far-from-clear — and important — stories of today’s airstrikes is who exactly the US hit.

The Islamic State part is easy enough, with the attacks on the group in Raqqa, Deir Ez Zor, and positions in eastern Syria near the Iraq border.

The confusion surrounds the US claim that it struck “Khorasan”, a group only outed a week ago by US intelligence services as a terrorist threat.

The Defense Department’s statement is that the majority of 47 Tomahawk missiles — the first wave of the attacks — were directed at eight “Khorasan” positions “west of Aleppo”.

However, the claims on social media — supported by videos and pictures — is that the US actually struck locations of the Islamist insurgent faction Jabhat al-Nusra. In particular, a strike on Kafar Daryan in Idlib Province, which is “west of Aleppo”, is being discussed.

While claims are circulating of casualties — including civilians — the only named victim is a Jabhat al-Nusra fighter:

And Jabhat al-Nusra has now released a photo of its damaged headquarters in the town:

Pic of Nusra Front Headquarters in Idlib #Syria hit by U.S planes. Pic released by the group itself. @akhbar pic.twitter.com/CZ4yRa3BMw

The US Defense Department made no reference at all to Jabhat al-Nusra — named by Washington as a “terrorist organization” in late 2012 — in its statement on the airstrikes.

Amid Washington’s rather vague statement and the confusion on the ground, media are issuing conflicting lines over “Khorasan”. Some are saying it is fighting alongside Jabhat al-Nusra; others says its leading members were with the Islamist group but split at some point in the past year.

So did the US actually hit eight Jabhat al-Nusra buildings and houses believing that members of “Khorasan” — which has no infrastructure like a command-and-control headquarters — might be hosted there?

UPDATE 1550 GMT: The Pentagon’s before-and-after pictures of the Finance Ministry in Raqqa, hit by one of the Tomahawk missiles: 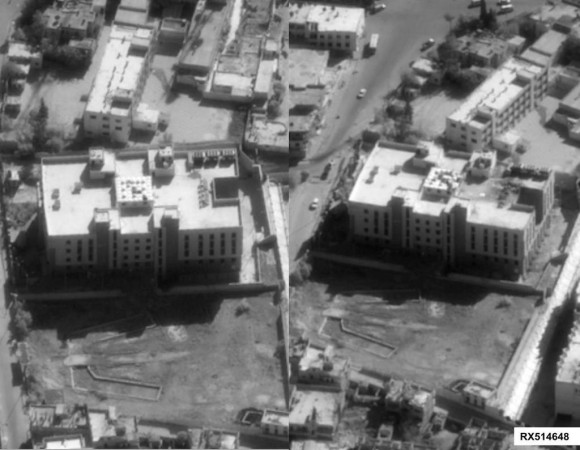 And footage of a strike on an Islamic State position:

He said the initial attacks were by Tomahawk missiles fired from US warships — most of the 47 missiles were aimed at the Khorasan group, which “was in the final stages of plans to carry out attacks against Western targets and potentially against the US homeland”.

The second wave was attacks by F-15s, F-22s, and other warplanes “launched from bases in the region…against Islaimic headquarters and camps.

In a third wave, F-18s were launched from the USS George H W Bush in the northern Arabian Gulf. Joined by other aircraft, they attacked camps and combat vehicles, mainly in the far east of Syria.

Aircraft from Arab countries were mainly in the third wave, but also participated in the second wave of attacks.

UPDATE 1520 GMT: Residents of Raqqa, the largest Syrian city controlled by the Islamic State, have been speaking to Martin Chulov of The Guardian about the airstrikes.

They said the Governorate building, Tabqa airport, the Brigade 93 base near the city, and the headquarters of the Raqqa TV station were among the targets.

Claims are circulating of 30 Islamic State fighters killed. Electricity was cut for 90 minutes. The city is reportedly quiet, with many people staying at home, but the market reopened.

One resident expressed sympathy with Syria’s insurgents, amid unconfirmed claims that they were also struck:

Many of us were upset as we heard today that Idlib was attacked and some headquarters of Jabhat Al-Nusra and Ahrar Al-Sham were attacked.

Obama hailed the participation of Arab States in the operation: “The strength of this coalition makes it clear to the world that this fight is not America’s alone.”

The President also praised “opposition fighters who are going up against ISIL [the Islamic State] on the ground”.

And he referred to attacks on “seasoned Al Qa’eda operatives called the Khorasan Group” (see update below).

UPDATE 1145 GMT: General Martin Dempsey, the head of the US Joint Chiefs of Staff, has hailed airstrikes as a success: “We wanted to make sure that ISIL knew they have no safe haven, and we certainly achieved that.”

Dempsey played up the claimed involvement of Arab states — Bahrain, the UAE, Saudi Arabia, Jordan, and Qatar — in the operations as proof of a coalition effort:

Once we had one of them on board, the others followed quickly thereafter. We now have a kind of credible campaign against [the Islamic State] that includes a coalition of partners.

UPDATE 1115 GMT: The Russian Foreign Ministry has condemned the US airstrikes:

Attempts to pursue own geopolitical goals through violating the sovereignty of other states only escalates tensions and aggravates the situation even further. Moscow has repeatedly warned that those who initiated one-sided military scenarios bear full international legal responsibility for the consequences.

Moscow has repeatedly warned that those who initiated one-sided military scenarios bear full international legal responsibility for the consequences.

UPDATE 0730 GMT: Unconfirmed claims are circulating that the US airstrikes have also hit a headquarters of the Islamist faction Jabhat al-Nusra in Aleppo Province, causing casualties.

Jabhat al-Nusra split with the Islamic State in spring 2013 over a dispute about leadership of the jihadist movement in Syria. The faction fights alongside the main Syrian insurgent blocs, but it is still on the US list of terrorist organizations.

However, the US Central Command indicated that its target is the Khorasan Group, a small faction identified as an enemy last week by the US Director of National Intelligence, James Clapper.

Central Command announced, “The United States has also taken action to disrupt the imminent attack plotting against the United States and Western interests conducted by a network of seasoned Al Qa’eda veterans — sometimes referred to as the Khorasan Group — who have established a safe haven in Syria to develop external attacks, construct and test improvised explosive devices and recruit Westerners to conduct operations.”

The Command said it carried out eight strikes against Khorasan Group targets west of Aleppo, including training camps, an explosives and munitions production facility, a communication building, and command and control facilities.

US intelligence said Khorasan is led by Muhsin al Fadhli, a Kuwaiti whom it claims was Al Qa’eda’s “senior representative” in Iran. The Americans say al-Fadhli arrived in Syria in April 2013 and began working with Jabhat al-Nusra, but subsequently split from the organization.

The US also claims that Khorasan also includes Abd Al-Rahman Muhammad al-Juhni, a Saudi national designated by the Treasury as “part of a group of senior Al Qa’eda members in Syria formed to conduct external operations against Western targets”.

The US has launched airstrikes and missiles against Islamic State targets in northern Syria.

I can confirm that US military and partner nation forces are undertaking military action against the Islamic State terrorists in Syria using a mix of fighter, bomber and Tomahawk land attack missiles.

The decision to conduct theses strikes was made earlier today by the US central command commander under authorisation granted him by the Commander-in-Chief [President Obama]. We will provide more details later as operationally appropriate.

Central Command said in a statement that the attack consisted of 14 airstrikes and 47 Tomahawk missiles launched from the warships USS Arleigh Burke and USS Philippine Sea in the Red Sea and North Arabian Gulf.

Islamic State buildings in Raqqa, its base city in northern Syria, and positions on the border with Iraq were hit. A US official said targets included training sites, supply lines, and arsenals, and added that drones were involved.

A reliable Syrian source on social media claims the US has also hit Deir Ez Zor in eastern Syria and the suburbs of Aleppo, Syria’s largest city, in the northwest:

US officials said Bahrain, Jordan, Qatar, Saudi Arabia and the UAE took part in the operations. One Department of Defense official said the Saudi Arabia, Jordan, the UAE and Bahrain were “full participants”, while another said Qatar sent military aircraft but did not carry out strikes.

Senior Administration advisors, including the head of the Joint Chiefs of Staff and the US Ambassador to the UN, said last weekend that Arab involvement was a prerequisite for an expansion of American airstrikes into Syria against the Islamic State.

The attacks come a day before President Obama leads a session of the UN Security Council on action in Iraq and Syria against the Islamic State.

The Assad regime, which had demanded that it be told of any planned attacks, said it was notified. The Foreign Ministry issued a statement: “The Americans had informed the Syrian representative at the United Nations that strikes would be carried out against the terrorist Islamic State organisation in Raqqa.”

Damascus later said that US Secretary of State John Kerry sent a letter Monday to Syrian Foreign Minister Walid al-Moallem, informing him of the impending strikes.

We did not provide advance notification to the Syrians at a military level, or give any indication of our timing on specific targets. Secretary Kerry did not send a letter to the Syrian regime.

Al-Moallem, had warned this week that any airstrikes must be pursued under a UN resolution “to combat the terrorism of the Islamic State, Jabhat al-Nusra, and other Al Qa’eda-linked terrorist organizations” rather than to fulfil “the hidden intentions of the US and its allies…[who] have conspired against Syria for more than three years”.

The US began airstrikes in Iraq against the Islamic State, which had advanced through the north and west of the country, on August 8. President Obama said on September 10 that an American campaign in both Iraq and Syria would “degrade and ultimately destroy” the jihadists.

A map of the Islamic State’s advance over the past week on the Kurdish center of Kobane in northern Syria, near the Turkish border: 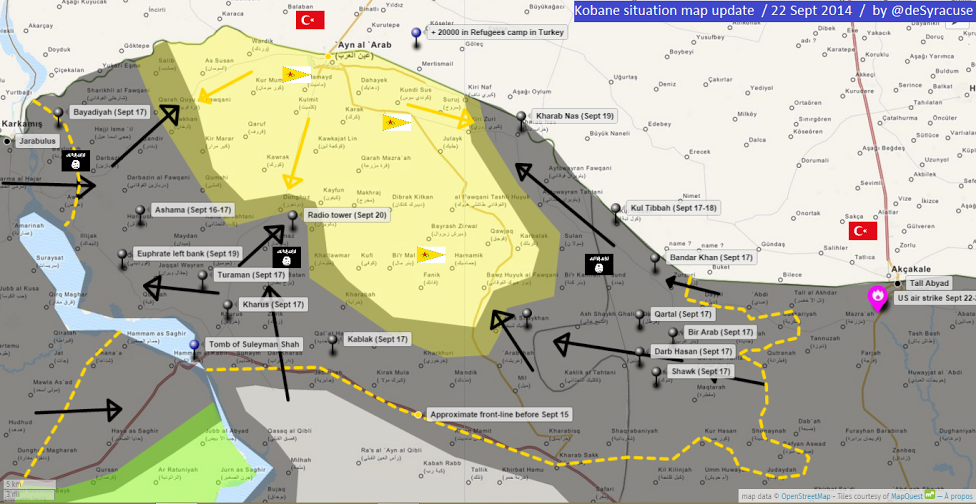 Kurdish forces claimed on Monday that they had checked the jihadist offensive, which has taken over scores of villages and prompted the flight of 130,000 civilians to Turkey.

The Israel Air Force has shot down a Syrian Su-24 jet fighter.
The Israeli military said it fired a Patriot missile at the warplane because it was “infiltrating Israeli territory”.

The military claimed the Patriot was launched when the jet ventured 800 meters “into Israeli territory”. By the time the missile hit the warplane, it had returned to Syrian airspace. It fell “over the Quneitra area”, near the demilitarized zone of the Golan Heights between Israel and Syria.

Israel has occupied part of the Golan Heights since the 1967 Arab-Israeli war.

The intercept by Israel of the Syrian aircraft is the first since 1989.