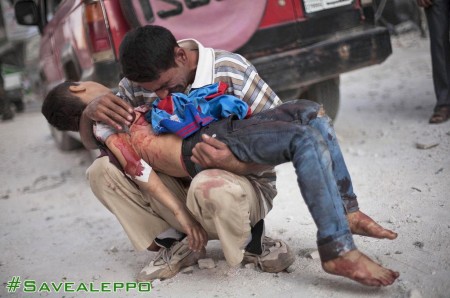 The campaign seeks to highlight the ongoing death and devastation in Aleppo through details on the regime’s bombing campaign over the last three months.

It also has a motive looking forward. Short of weapons and ammunition and facing encirclement by Syrian forces, insurgents are concerned that they may not be able to hold onto the eastern part of Syria’s largest city after holding areas for more than two years.

Video and images from the campaign, via the Free Syrian Army’s spokesman for northern Syria, Hussam al-Marie:

Under these buildings there are people still believing in Freedom. Save them. #SaveAleppo pic.twitter.com/e3MqPhegrI

We asked for Freedom. #Assad replied with barrel bombs falling on our children. #SaveAleppo pic.twitter.com/jqcL1ZoC47

GRAPHIC: #Aleppo over the past 3 months has faced constant regime bombing all for our call for freedom #SaveAleppo pic.twitter.com/bcbVHq9lxC

The jihadists launched their offensive earlier this weeks after overunning other regime bases this summer.

State news agency SANA says nothing this morning of the ongoing assault of the Islamic State on the regime’s last military base, Tabqa, in Raqqa Province in northern Syria.

However, it condemns the jihadists with a brief item from eastern Syria:

Members of the Islamic State of Iraq and Syria (ISIS) terrorist organization on Friday murdered two civilians in the town of al-Shumaitiye in Deir Ez Zor countryside in full sight of locals.

A number of locals told SANA’s correspondent that ISIS members opened fire on locals in the town square, broke into homes, and abducted a number of youths.