Iraq Feature: Amerli — The Town Holding Out Against the Islamic State and Starvation 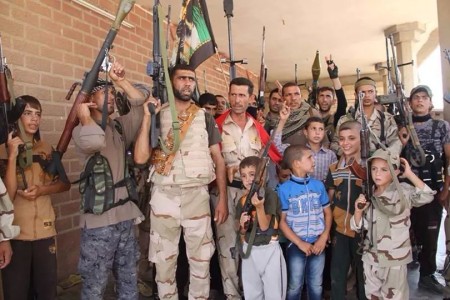 Almost alone in the Islamic State’s newly-conquered territory in northern Iraq, the town of Amerli is holding out against the jihadists and starvation.

Amerli, 110 miles north of Baghdad, is surrounded by 36 villages in Salaheddin Province that are now cooperating with the Islamic State following their rapid advance since June. For more than two months, the town — largely populated by members of the Turkmen minority who practice Shia Islam — has been besieged but it has refused to fall.

Iraqi journalists and activists have written of the crisis, wondering why the international community has not intervened. Reporter Mazen Alzaydi summarizes,”20,000 Iraqi Turkmen are threatened with a new massacre, and it seems that the world is waiting for the massacre to take place in order to be sympathetic with the victims.”

No Kurdish peshmerga, who have been fighting the Islamic State, have reached Amerli. There are only a few Iraqi soldiers who have remained after the retreat of the armed forces in June.

Haider al-Bayati, an Amerli resident, said the town is sealed off in all directions, with the nearest Islamic State position only 500 meters. With only helicopters able to bring in food, residents face starvation. Electricity has been cut off. The town has no hospital — the sick and injured must either be treated at a clinic staffed by nurses or evacuated by air.

With the helicopters only able to carry about 30 people per day, women have died in childbirth because of the lack of doctors, and according to residents, “People are dying from simple wounds because we don’t have the means to care for them.”

Dr Ali al-Bayati, who works for a humanitarian foundation has been moving in and out of the town by helicopter, added, “We are depending on salty water, which gives people diarrhoea and other diseases. Since the siege started, more than 50 sick or elderly people have died. Children have also died because of dehydration and disease.”

Former MP Mohammed Al-Bayati claimed that the town was being targeted by the Islamic State because of its Turkmen population. Noting the high-profile international effort to help the refugees of Sinjar after that town was overrun by the jihadists, he asserted, “Unfortunately, the situations are treated with two different standards”.

It is a humanitarian disaster. Twenty-thousand people in Amerli are fighting off death. There are children who are only eating once every three days.

I can’t describe the situation. I just don’t know what to say.