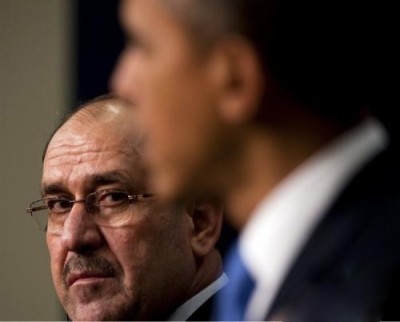 UPDATE 1700 GMT: Britain has joined the US and France in commitments to arm Kurdish forces, albeit through provision of weapons from countries of another era.

Prime Minister David Cameron said the the RAF will be flying in weapons which originated in the Soviet Union and were used by Eastern European countries of the Warsaw Pact.

The UK Government said the Kurds have not requested British weapons.

Britain has also sent a “handful” of SAS troops into northwest Iraq, paralleling a US deployment of special forces.

Ostensibly, the troops have been despatched to provide intelligence for the evacuation of refugees from Mount Sinjar, rather than — for example — serving as spotters for airstrikes.

UPDATE 1245 GMT: Caretaker Prime Minister Nuri al-Maliki said again on Wednesday that the appointment of Haider al-Abadi to replace him violates the Constitution and “has no value”.

In a televised speech, Maliki called that all parties should accept a pending federal court ruling backing his objection to the process.

“Holding on (to the Prime Minister’s post is an ethical and patriotic duty to defend the rights of voters…(and) to protect the state,” al-Maliki said.

UPDATE 0555 GMT: France has announced that it would join the US in providing arms to Iraqi Kurdistan.

A statement from French President Francois Hollande’s office said, “France intends to play an active role by providing, along with its partners and in liaison with the new Iraqi authorities, all the assistance required.”

Hollande also supported the nomination of Haidar al-Abadi as Prime Minister and urged a “unity government, representing all Iraqis to fight effectively against Islamic State”.

UPDATE 0555 GMT: An additional 130 US Marines and special forces have been deployed to the Iraqi Kurdistan capital Erbil.

Officially, the personnel are on a temporary mission to assess the scope of the humanitarian crisis, with 10,000s of refugees on Mount Sinjar and 700,000 displaced Iraqis in Kurdistan.

Secretary of Defense Chuck Hagel assured Americans, “This is not a combat boots on the ground kind of operation.”

In June, just after the insurgent offensive that captured some of Iraq’s biggest cities, President Obama despatched about 300 forces to Baghdad and Erbil.

In a series of moves inside and outside Iraq — some of them coordinated — the departure from power of Prime Minister Nuri al-Maliki was all but assured on Tuesday.

A day after the nomination of Haidar al-Abadi to replace Maliki, key political parties and foreign powers lined up to anoint the change.

Al-Abadi had already been forward by the National Alliance, the bloc of the largest Shia parties, and factions such as the Badr Brigades — linked to the prominent Shia cleric Moqtada al-Sadr — and Asa’ib Ahl al-Haq publicly announced their support yesterday.

US endorsement of the “constitutional” transition was followed on Tuesday by European powers, Turkey, Iran, and Saudi Arabia.

How intense was the shift against Maliki? EA sources revealed that Iran — which had firmly backed the Prime Minister until last week — had sent an envoy to its rival Saudi Arabia to discuss how to arrange a departure satisfying both countries.

Maliki, who made a defiant televised speech with about 30 political allies on Monday, was silent yesterday. However, he put out a brief statement on his website calling on security forces “to stay away from the political crisis and carry out their duties in protecting the country”.

Meanwhile, the humanitarian crisis serving as the catalyst/pretext for US intervention continued in northwestern Iraq. Between 20,000 and 30,000 Yazidis were still trapped on Mount Sinjar, where they fled last week as the Islamic State seized Sinjar and other towns near the Syrian border. The US, European allies, and Iraqi units carried out relief flights on Tuesday. One helicopter crashed, killing the pilot and injuring Yazidi MP Vian Dakhil and 20 refugees who were being evacuated.

Photographer Moises Saman, who works for Magnum and Time magazine, was on the flight and captured this image just after the crash: 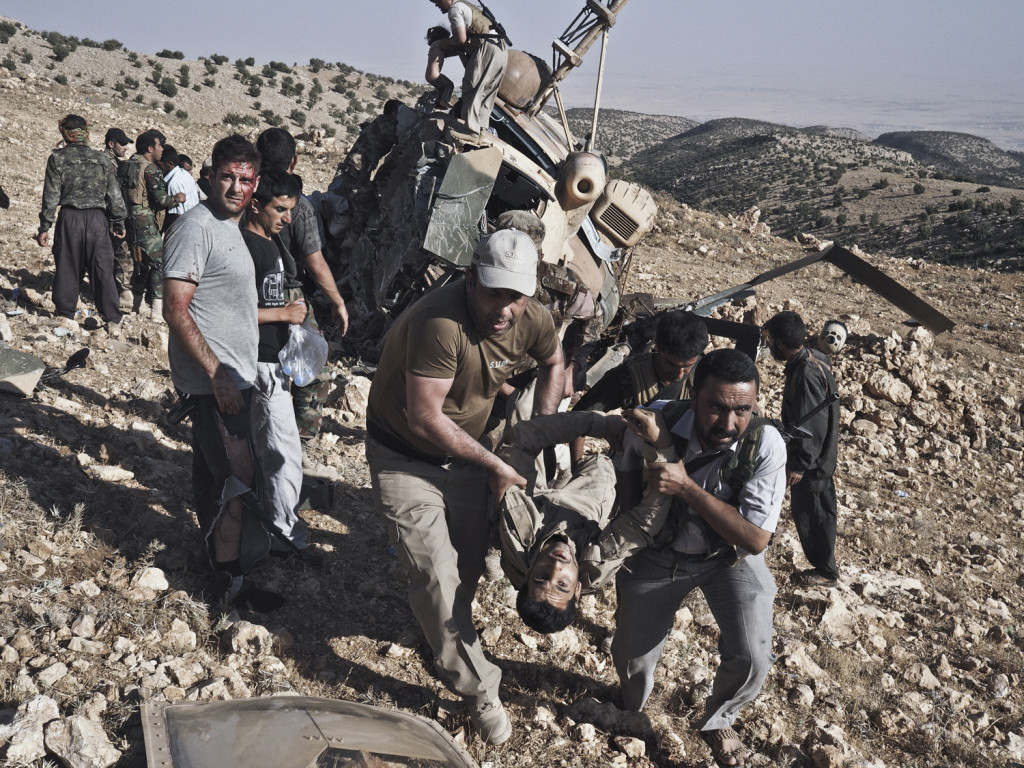 The UN said another 35,000 people had been able to get off the mountain, moving through Syria into other parts of Iraqi Kurdistan.

The UN reported more than 1.2 million Iraqis are now internally displaced, including 700,000 in Kurdistan and almost 400,000 in Dohuk Governorate alone.

Those still on Mount Sinjar told stories of thirst, starvation, and imminent death. One mother told Mona Mahmood of The Guardian:

We have been on the mountain for nine days now. Even my breast is getting dry to feed my little baby. I’m frantically worried about her safety, watching her heath waning rapidly within the last two days. She is losing weight for the shortage of food and dehydration. There is no medical assistance on the mountain at all.