Iran Daily, August 28: Supreme Leader to Rouhani “Stand Firm Against the US” 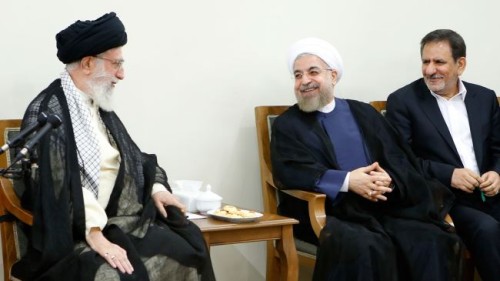 The Supreme Leader, addressing President Rouhani and his Administration on Wednesday, told the Government to stand firmly behind Iran’s position on international issues and on relations with the US.

Ayatollah Khamenei declared, “Taking a clear and resolute stance vis-à-vis such issues as Palestine, the Zionist regime, Gaza, Syria, Iraq, Takfiris (deviant Muslims), and the US acts of interference is in the interest of the Islamic establishment and does not contravene the language of diplomacy and negotiations.”

The Supreme Leader did not specifically refer to the ongoing talks with Washington and other powers over Iran’s nuclear program. However, his statement follows the declaration earlier this month, while backing those negotiations, that talks with the US are “useless”.

The key to economic prosperity which has been emphasized by the esteemed president, is the issue of production. Production has to be boosted using numerous domestic potentials so that economic prosperity and enhanced non-oil exports would be achieved.

Khamenei has asserted that an Iranian “resistance economy” can ensure the security of the Islamic Republic, even if nuclear negotiations do not succeed and US-led sanctions continue.

The deputy head of Iran’s armed forces, Massoud Jazayeri, alleged on Wednesday that a downed Israeli drone had flown from a “former Soviet republic”, north of Iran.

Earlier this week, Iran claimed that it had intercepted and shot down the unmanned drone as it flew toward nuclear facilities at Natanz.

Jazayeri said, “We are waiting for that country which has cooperated with the Quds Occupying Regime [Israel] to…make up for its wrong deed; otherwise, we will declare its name.”

In 2012, US officials said Israel had been granted access to airbases in Azerbaijan, which borders northern Iran.

Jazayeri linked Iranian action over the drone to Israel’s conflict with Palestine, “The destruction of the spy drone is not the end of the Islamic Republic of Iran’s action as we will give our response to the enemy in the occupied territories.”

Iran Declares It Has Advanced Centrifuge for Nuclear Program

In an announcement which could be significant for nuclear talks between Iran and the 5+1 Powers, the head of the Atomic Energy Organization has declared that Tehran has a new generation of advanced centrifuges for uranium enrichment.

Ali Akbar Salehi said Iran had tested the IR-8 centrifuges — 24 times as productive as its current equipment — under the supervision of the International Atomic Energy Agency.

If confirmed, the news would mean that Iran could reach its goal of self-sufficiency for a civilian nuclear program with about 8,000 centrifuges.

Iran currently has around 19,000 centrifuges, about half of which are operational. The US and European allies have insisted that the number must be significant reduced in any comprehensive nuclear agreement.

The more powerful IR-8s means Tehran could agree to that reduction and still reach its target of 190,000 Separative Work Units; however, Washington and other 5+1 Powers are unlikely to agree to the introduction of the new centrifuges.

Salehi said necessary mechanical tests have been conducted on the IR-8s, but they have not been injected with gas — a prerequisite for enrichment — as this requires the permission of President Rouhani.