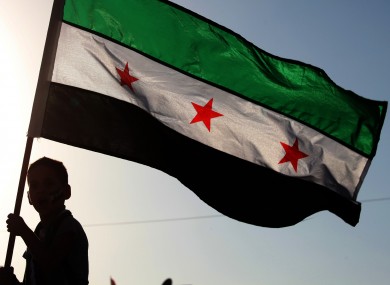 In two days of briefings, a delegation from Syria’s opposition abroad has pressed for greater official support from Britain to end regime atrocities and lead a transition away from President Assad’s rule.

Representatives of Syrian Expert House — a group of about 300 human rights activists, academics, politicians, legal experts and defected military officials — met in London with members of the House of Lords, representatives of the Foreign and Commonwealth Office, Amnesty International, the Royal Institute of International Affairs, and members of the Syrian diaspora. Syrian Expert House emphasized the urgency of international co-operation to halt the regime’s indiscriminate use of force against civilians.

Since the inception of the uprising in 2011, leaders of Syria’s political and armed opposition have criticized the failure of Britain’s officials to follow up rhetorical support with concrete measures to end Assad’s rule, with calls for the President to step down since August 2011 bringing little in the way of on-the-ground-assistance to insurgents. The defeat of Prime Minister David Cameron’s House of Commons motion on military intervention in August 2013 appeared to mark a decisive retreat from involvement in the conflict by British MPs, still irked by the spectre of the Iraq campaign.

However, opposition members say the UK still has a crucial role to play in ending violence and mitigating the fallout of the humanitarian crisis.

Radwan Ziadeh, director of the Washington-based Syrian Centre for Political and Strategic Studies, talks about the efforts to persuade British representatives to adopt a pro-active policy.

ZH: What proposals has your organisation put to the Foreign and Commonwealth Office to help end the regime’s attack on civilians?

RZ: We are proposing to find ways of stopping the use of barrel bombs and the Syrian air force. This is the only civil war in history where an air force has been used for almost three or four years. The number of civilian casualties now exceeds that of any other civil war –– for example in the Balkans or Latin America –– because of the use of the air force.

It is clear now that a No Fly Zone is off the table, but we talked about ways of assisting without violence –– for instance, by providing MANPADS (anti-aircraft missiles) for vetted groups within the armed opposition.

We are also linking this to what is happening in Iraq, because you cannot fight the Islamic State in Iraq and forget their presence in Syria.

This is the same discussion that we had in the House of Lords, which around fifteen members attended.

ZH: Recent events in Iraq clearly have major implications for Western policy in the region. How are these ISIS-related developments altering Britain’s approach to Syria?

RZ: Unfortunately what we see here, as in Washington, is too much focus on Iraq. They are not linking it directly to Syria. At the same time, it seems that the US and Britain feel to some extent guilty for what has happened in Iraq and therefore have a responsibility to do something. In Syria, they feel that they are not responsible and so do not need any involvement.

ZH: But isn’t it arguable that the West’s lack of involvement in Syria is partially responsible for what is now happening there?

RZ: Of course. Because if there had been earlier action, we would not have the kind of situation we are seeing now. As for example, in the UK papers we are now reading warnings from the former head of MI6 about terrorist risks from Britain’s approach to people going to fight in Syria. When we don’t take these proposals seriously, and on time, the actions we take later might only make things worse.

ZH: Are policy-makers in the UK drawing an explicit link between Syria and the rise of the Islamic State (ISIS) in Iraq?

RZ: The British are very clear about the connection between Syria and Iraq –– they have a much closer understanding of Syria than the US. But the problem is that the British are too reliant on the US, especially in these kinds of actions, which is why any measures have to be co-ordinated. The UK has an important role in trying to build the understanding of the international community about how ISIS might be the fourth or fifth wave of global jihad and how this could affect not just the Middle East, but the whole world.

At the same time, it is important to emphasise that you cannot fight ISIS while leaving Assad in place. ISIS has gained the ground force in Iraq because there is a political problem there, and the same applies in Syria.

ZH: So how Britain can help protect those areas in Syria that are not controlled by ISIS and provide assistance on the ground to liberated parts of the country?

RZ: We are advocating an approach called “Securing the Liberated Areas”, which means protecting them from both the Assad government and ISIS. It is very important that the Free Syrian Army is provided advanced weapons to be able to secure these areas. The US administration is now moving a proposal of this sort to the congress, and I think something similar is forthcoming in the House of Commons. So we will see how things move, but the situation on the ground is evolving and requires action very quickly.

ZH: And in your view, the UK is waiting for the US to take the lead in terms of providing this kind of material assistance?

ZH: What is the feeling among Syrians in Britain about the UK government’s approach to the conflict?

RZ: Not only Syrians in London, but all around the world, have been very disappointed about the lack of action to stop the everyday slaughter of civilians. This is especially the case among those who lived in the West who believe that their governments could do something, but simply don’t want to.

The issue of British people joining the armed conflict in Syria has become very sexy for the media and public attention always focuses on ISIS. We have called on all governments to make stronger controls on those who are going into Syria, because the majority of ISIS fighters there are non-Syrians. Many foreigners are joining the fight for money, but only a very small percentage of ISIS are Syrians.

The Western preoccupation with this subject totally changes the image of the uprising, which is one for dignity and human rights. The world is actually forgetting the heroes of that struggle.

ZH: In Washington we have recently seen moves to give greater official recognition to the Syrian political opposition in the form of the Syrian Coalition. Do you anticipate something similar from London?

RZ: There are increasing levels of recognition by the UK also, but this actually means nothing at the moment, because there is no legal recognition. It is a joke.

Syrians still have to rely on Assad government documents, and most aid is still being delivered through dealing with the regime. At the same time, the UK has only agreed to accept 500 refugees from the conflict, which is nothing. So unless there is a change in terms of providing more actual assistance to the Syrian people, I am not sure these official measures are of any use.

Zoe Holman is a UK-based, Australian freelance journalist, writer, and doctoral candidate working on projects related to international politics and the Middle East. She has lived in and reported from the Middle East, South-East Asia and Europe for outlets including The Guardian, The Age/Sydney Morning Herald, The Economist, VICE News and OpenDemocracy.