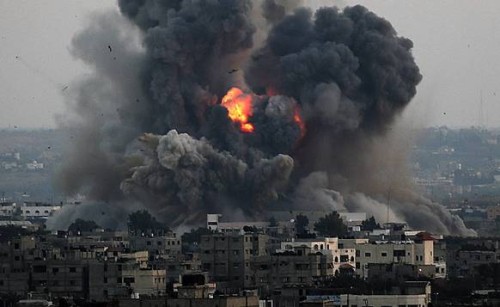 Israel and Gaza are again on the verge of war. In the last week, Israeli airstrikes have killed dozens of people in the Palestinian territory, while hundreds of rockets have been fired from Gaza into southern Israel. Speculation has risen that Israel may launch its first large-scale ground operations into Gaza since 2008.

How did Israel and Gaza return to the verge of war?

WILL THERE BE A GROUND WAR?

Israel captured the Gaza Strip from Egypt in the 1967 Arab-Israeli War. Following the 1993 Oslo Accords, the Palestinian Authority took responsibility for civil administration; however, Israel maintained control of airspace, territorial waters, and border crossings, with the exception of the land border with Egypt.

In 2005, the Israeli Government disbanded all settlements in Gaza, forcibly evacuated about 9,000 Israelis.

In 2006, Hamas won a surprise majority of seats in Gaza over its rival, Fatah, in Palestinian elections. It consolidated its control in a brief military conflict with Fatah in spring 2007. Israel responded by declaring Gaza “hostile territory” and imposing a tight land and sea blockade on supplies into the Strip.

In February-March 2008, Gazan militants fired more than 40 rockets into southern Israel. The Israeli army responding with missiles and bombs that destroyed buildings such as the Interior Ministry and with ground operations.

A ceasefire was agreed in June 2008, but as it expired, Israel carried out airstrikes and invaded Gaza in December 2008, claiming the operations were in response to rockets and mortars launched from Gaza. An estimated 1,166-1,417 Palestinians and 13 Israelis were killed before both Israel and Gaza declared ceasefires after four weeks.

Throughout the period, there have been clashes on and across the border, any of which could have been the catalyst for a wider conflict.

On June 12, three Israeli teenagers were kidnapped in the Palestinian West Bank, as they were hitchhiking to their homes. Their bodies were found eighteen days later.

However, Netanyahu said that there would be a tough response, pointing towards Gaza, as Israeli security forces said two Hamas members were suspected of the kidnapping and murder.

Hours after the burial of the three teenagers, a 16-year-old Palestinian was abducted in East Jerusalem. His burned body was later found in a forest. Six Israelis have been arrested.

During the search for the missing teenagers, Israeli security forces detained 381 people in the West Bank. More than 280 belonged to Hamas, and almost all of the organization’s leaders in the area were taken into custody.

The detentions raised tensions, but clashes were sporadic and confined to the West Bank until July 2. Nine rockets were fired from Gaza into southern Israel, with residential buildings in Sderot damaged. Israel responded with 15 airstrikes which wounded 15 people and destroyed two buildings.

On Sunday, July 6, further air raids killed nine people in Gaza, while almost 40 rockets and mortars were fired into Israel. The Israeli Security Cabinet met and decided on “escalation”, although officials talked down the possibility of a ground offensive.

On Tuesday, however, both airstrikes and rocket attacks surged. Following a salvo of 20 rockets, Israeli warplanes hit 150 sites in 273 attacks, killing at least 27 people and wounding 130.

Prime Minister Netanyahu called up 40,000 reservists, and said he was prepared to “remove the gloves” for an offensive if rocket attacks were not halted.

Inevitably, the headline story becomes one of a cycle of airstrikes and rockets, with each side claiming that it is reacting to the aggression of the other.

That story runs the risk of losing sight of the wider political context for the escalation.

On April 24, Netanyahu suspended months of US-brokered “peace talks” with the Palestinians.

The discussions had foundered on the issue of Israeli settlements in the West Bank, but the Israeli Prime Minister’s declaration was prompted by an immediate concern: reconciliation between Fatah and Hamas.

A day earlier, the long-time Palestinian rivals finally reached a unity agreement. The Palestinian Authority’s Abbas eased criticism that he had failed to deliver any breakthroughs for a Palestinian state and an end to Israeli occupation and settlements. Hamas ensured no internal fight with Fatah in Gaza, as it faced ongoing economic crisis, Israeli blockade, and a cooler relationship with Egypt after Cairo’s July 2013 military coup.

For years, Netanyahu’s political strategy rested on a divided Palestinian movement. He could pay lip service to negotiations with the Palestinian Authority, even if there was no prospect of advance, while insisting that Hamas must be ostracized as a “terrorist” organization bent on the destruction of Israel.

That strategy evaporated with the unity agreement. Netanyahu either had to find a way to split Fatah and the Palestinian Authority or, failing that, to punish Hamas to prevent a bolstered Palestinian political front.

In December 2008, Israel was able not only to inflict that punishment but to win Fatah’s tacit agreement to the war on Hamas in Gaza. That outcome is far from likely this time, but the Israeli strikes push the “unity” resolution to the background — at least as long as the conflict in Gaza can be sustained.

But Netanyahu is not the only one who can seek to benefit from a pretext. Watching the detention of its leadership in the West Bank and the looming possibility of airstrikes, Hamas had to make a decision.

The Gazan group could sit back and absorb the punishment. However, to do so ran the political risk that it could be criticized and outflanked by other factions, such as Islamic Jihad, who can also carry out rocket attacks. Hamas’ leadership would be denounced for its weakness, adding to the pressure on it from the ongoing economic situation.

A response with rockets and mortars into southern Israel would inevitably bring deadly strikes, but these might also rally the Gazan population behind the leadership. Just as Hamas withstood the 2008-2009 war and the November 2012 attacks, so it can emerge with the badge of resistance.

Whether that badge brings a lasting benefit in a closer alliance with Fatah and international sympathy for Gaza remains to be seen, but the alternative — a passive acquiescence to Israeli pressure — apparently could not be countenanced.

WILL THERE BE A GROUND WAR?

It is too early to tell.

In December 2008, the Israeli Government’s objective of breaking Hamas included ground operations, but these were unable to quickly deliver the victory. Instead, the mounting civilian casualties — accompanied with revelations such as Israel’s use of white phosphorous explosives, banned under international law — threatened to turn international opinion against West Jerusalem, and the prospect of an ongoing war raised uncomfortable memories of Israeli failure in the 2006 war in Lebanon.

So both in March 2012 and November 2012, intense airstrikes never led to an invasion. Instead, Israel inflicted some damage on the Hamas leadership, without breaking it, and then pulled back to consider the next political steps.

Netanyahu could calculate that, given his difficult political situation, he can gamble on domestic support for a ground assault. But, despite heated rhetoric from some Israeli factions about the need to punish Gazans once and for all, the Prime Minister is likely to face resistance from other sections of the Israeli population. Equally important, he could face opposition from politicians, military commanders, and intelligence agencies who are far from convinced of the benefits — and are quite concerned about the possible costs — of an invasion.

That equation could shift with a sharp rise in rocket and mortar attacks, especially if these hit beyond southern Israel and cause casualties. In November 2012, that shift never occurred, despite some rockets being fired on Tel Aviv, but the same outcome cannot be guaranteed this time.

Put bluntly, neither Israel nor Hamas have planned on a war, but wars do not always result from plans.

Instead, they can be caused by catalysts. One of these — the kidnapping and murder of three Israeli teenagers — has moved the political situation from tension to Netanyahu’s attempt to strike a blow at Hamas and the slap of rockets in return.

Another catalyst could turn that attempted blow, which has already killed scores of Gazans, into somewhat far worse on both sides of the border.