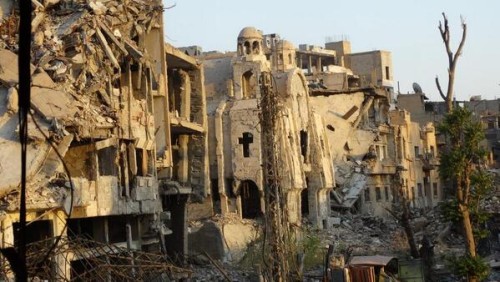 Sources confirmed on Tuesday that the last insurgents have left Deir Ez Zor city, one of their last significant positions in eastern Syria.

The withdrawal leaves the city divided between the Islamic State and Syrian forces, raising the question of whether they will fight or arrange a de facto acceptance of each other.

Since the start of 2014, as the Islamic State battled insurgents across northern and eastern Syria, there has been an unspoken non-aggression agreement between the two sides. After its expulsion from much of the northwest Syria, the Islamic State’s priority has been to establish territory under its control in addition to its rule of Raqqa in the north, the largest city outside regime control. The Assad regime has been content to let the Iraqi-led group weakens its main threat of the insurgency.

So far neither side has given any public indication of its next steps.

As clashes continue in the Qalamoun region near the Lebanese border, insurgents — led by the Islamist faction Jabhat al-Nusra — have released video of their operations against fighters from the Lebanese organization Hezbollah, allied to the Assad regime:

Hezbollah commander Bassam Ali Tabaja is among those killed in the assault.

Hezbollah announces the death of its commander in Qalamoun area, Bassam Tabaja pic.twitter.com/EFyigVgdEa

While the Syrian regime took cities and towns this spring throughout Qalamoun, between Damascus and the Lebanese border, insurgents continue to operate in the countryside.

Well-placed sources report Syrian forces have tried and failed to break through insurgent lines in the key town of Morek in Hama Province.

The sources said Syrian warplanes conducted airstrikes and troops then carried out three ground attacks from different locations on Morek.

The assaults were all repelled, with more than 60 regime casualties and the loss of four tanks.

Morek is located on the main highway from Hama to Idlib Province.

Regime forces have tried for months to claim the town. The urgency of the task has been reinforced in recent weeks by the insurgent siege on regime bases goal near Maarat Al Nouman in Idlib Province.

Bashar al-Assad has been sworn in at the Presidential Palace for a seven-year term following his nominal re-election in June.

Assad said the Syrian people were winners over “terrorism” in a “dirty war” waged by outsiders, promising that those who supported the Syrian opposition “will pay a high price”.

Assad declared, “They wanted it to be a revolution but you were the real rebels,” he said. “They failed in trying to brainwash you, or break your will.”

Insurgents Capture Town and Large Regime Base in Daraa Province

Insurgents are celebrating a significant victory in Daraa Province southern Syria, occupying the town of Sheikh Saad and overrunning the large base of the regime’s Brigade 61.

Insurgents walking through the base:

The Kurdistan Tribune, citing local doctors and officials, claims the Islamic State has used a chemical weapon against Kurdish fighters during the battle for Kurdish-controlled Kobanê in northeast Syria.

We do not have the high-tech medical equipment to determine the exact type of chemical weapon used by ISIS, but seven doctors are convinced that chemical weapon was used as the examinations found symptoms and strange white injuries on the bodies, all of which indicate that they were killed by some sorts of chemical weapon.

The Health Minister urged international medical institutions and human rights organizations to come to Kobanê and investigate the case.

YPG spokesperson Redur Xelil, echoed the claims of the Minister and the appeal for an investigation.

The Islamic State, having taken villages on three fronts around Kobanê, one of the key towns in Syria Kurdistan.