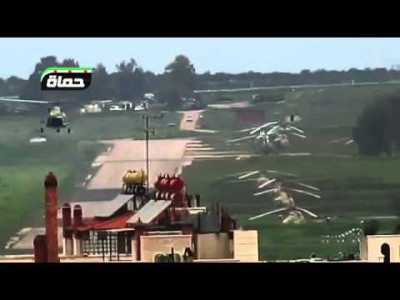 LATEST: Video — Aftermath of a Regime Attack on Damascus Suburb of Douma

Insurgents are pressing regime forces in central Syria, moving within five miles of one of the military’s most important airports.

Opposition fighters have taken an arms depot and a checkpoint since Sunday as they advance on the airport near Hama. They have cut the road between the airport and villages to the west.

The insurgents are now firing Grad rockets into the base, hoping to destroy the stocks of barrel bombs made there as well as to weaken defenders.

The Hama airport is central to Syrian military operations throughout the country. It not only stages many of the aerial attacks on insurgent-held areas, but also is the transport hub for movement of Syrian forces to both the north and the south.

Insurgents also carried out a headline operation in Aleppo on Tuesday, using an underground bomb to demolish a former police station now used as a headquarters for shabiha (militia). More than 50 militiamen were killed in the attack.

Video: Aftermath of a Regime Attack on Damascus Suburb of Douma

The Islamic State claimed control of part of the city after insurgents withdrew earlier this month. However, there have been reports of demonstrations by residents unhappy with the jihadist organization.

Video: Insurgent “Liberation” of Village in Quneitra Province in Southwest

An insurgent outlet has posted a 15-minute video of attacks earlier this month on the regime position in Saraya al-Halabi in Quneitra Province in southwest Syria:

Two weeks ago, insurgents declared the “liberation” of the village near the Golan Heights and the demilitarized zone with Israel.