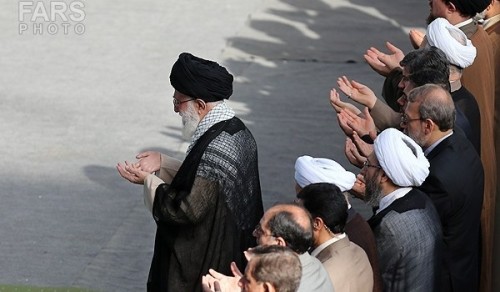 Leading Eid al-Fitr Prayers at the end of the holy month of Ramadan, Ayatollah Khamenei denounced Israel’s “genocide” in the 23-day Gaza war, called on the international community to respond, and praised Palestinians for “resisting and standing up for themselves”.

Khamenei called for Islamic unity in the support of Palestine and the challenge to the “West”:

Setting aside differences, the world of Islam should use all its potential to meet needs of the people of Gaza and while countering impudent crimes of Zionists, Muslim world should voice hatred and disavow of Zionist allies, especially the US and the UK….

If power mongering, dependences and corruptions fail to divide the world of Islam, no arrogant power would dare to invade and make aggression on Muslim countries or seek ransom from them….

Our clear message to Muslim governments is to rise up to assist the oppressed people and show that the world of Islam will not keep silent in face of tyranny and injustice.

The Supreme Leader has issued a series of statements during the Gaza conflict, calling for Palestinians in both the West Bank and Gaza to be armed against the Israeli menace.

However, for the first time, President Rouhani joined the angry public rhetoric against the Israeli attacks. He told the audience of senior Iranian officials and foreign diplomats, “Today, this festering Zionist tumor has opened once again and has turned the land of olives into destruction and blood and littered the land with the body parts of Palestinian children.”

Rouhani also denounced the jihadist Islamic State, with its advance in Syria and Iraq, “a second festering tumor that murders people in the name of Islam”. He then linked the jihadists and the Israelis: “Analysts say that both of these tumors derived from the same origin.”