Syria Op-Ed: This Election is a Cruel Farce 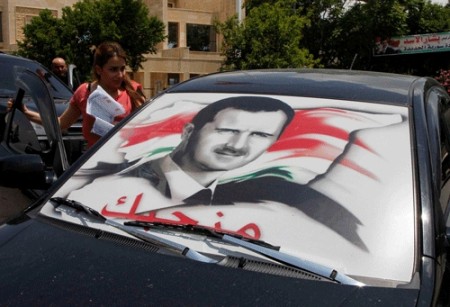 A Syrian child is dismayed at the dreary state of the gray, patched school walls. The child wakes in the middle of the night, visits the school armed with a flashlight and marker and begins to draw. Soon other children join in with their flashlights and brushes. Together, they paint a colorful mural to cover the patches.

A Syrian man sits with his family in a room lit by a candle. Their only window is blocked by a massive wall covered with political slogans. He decides he’s had enough. He faces the towering wall outside with a hammer and stepladder and begins to chip away at the concrete. Crowds join him with bigger ladders and better tools. Together, they topple the wall and let the sunlight pour into the dark rooms.

According to Assad, the elections — scheduled for June 3 — are the first elections in Syria’s modern history. This year the people have a choice between Assad and a slew of barely-known candidates vetted and approved by the regime to “run” against the president who inherited power in 2000 from his father Hafez who ruled Syria since 1971.

In midst of the raging violence, continuous aerial bombardment by the regime on Syrian cities, and with almost half of the country’s 24 million population now displaced, the concept of having a “choice” or even holding elections is nothing but a crude mockery of the blood-soaked landscape of real loss.

The president’s image is absent in the videos except in a disembodied signature endorsement that appears at the endings. Instead, a photogenic collective acts on behalf of the leader. In creating a savvy political message based on the people instead of the dictator, the professionally-produced campaign videos subversively steal the narrative of the very uprising that the regime crushed: children writing on school walls in the middle of the night and citizens literally breaking down walls of fear. Actions that led to mass torture, detainment, and death.

The videos also ignore the present reality to focus on an idealized future without a visible political platform or plan. What’s beneath the patches of gray paint on the school wall? Why is there a towering concrete barrier that must be broken? Why is it such an act of defiance to raise a Syrian flag inside Syria? Why does Syria need to be rebuilt? Like the absence of Assad’s face in the campaign, there’s a disturbing sense of willful amnesia that does not acknowledge the current disastrous climate nor the devastating death toll, displacement, or destruction.

Over the last three years I’ve met and read harrowing stories of Syrian ex-political prisoners. Among their many brutal experiences in Assad’s prisons is the requirement to always wear a blindfold while inside the crowded cells. Even while asleep. The prisoners are conditioned to not see. One of the reasons they were thrown in prison in the first place is because they saw too much. Seeing too much and worse, protesting about it, is a crime in Assad’s Syria.

Today, Syria is split between people who can’t unsee the horrors they have seen over the last three years and those who are more than willing to tighten the blindfold onto their eyes.