Syria Interview: Assad Praises “Rational” US as He Celebrates Victory 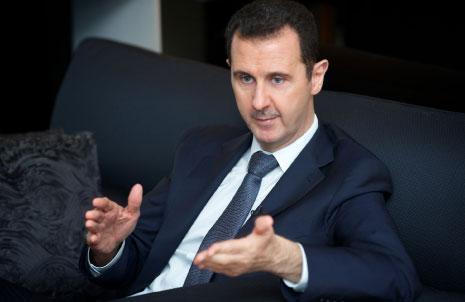 In an interview with the Lebanese newspaper al-Akhbar, President Assad has praised the US for its balance over the conflict.

“The Americans have proven they are more rational than the French, despite everyone’s involvement in the conspiracy,” Assad said.

The President claimed that the Obama Administration was having to fend off American groups trying to break Washington and Damascus: “US officials, including former executives, are trying to maintain contact with us, but they do not dare because of lobbies pressuring them.”

Assad struck a victorious pose over his nominal re-election last week, saying it proved the Syrian people had not given into “mobilization, terrorism, takfirism, and foreign conspiracy”:

From the first moments of the crisis, which was brought to Syria to destroy it, I felt that the people trust the state and its president and its army. This is why I kept betting on the ability of these people to hit the roots of the conspiracy.

I’m convinced, more than ever, of the people’s ability to overcome this black phase in the history of Syria.

The President said his amnesty for prisoners, announced this week, bore out the “dialogue” and reconciliation around the election.