Syria Daily, June 23: Will a New Truce End Suffering in Yarmouk in Damascus? 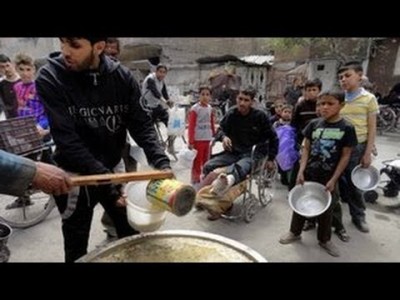 Week Past, Week Ahead: Syria — How Will the Iraq Crisis Re-Shape the Conflict?

The BBC reports that the Assad regime and insurgents have agreed a truce in the besieged Damascus section of Yarmouk.

Under the ceasefire, which reportedly began on Saturday night, the main entrances to the Syrian camp will be opened and basic services will be restored.

State news agency, citing an official of the Palestinian Liberation Organization, said armed insurgents would leave the area and be able to seek amnesty.

Chris Gunness, a spokesman for the UN’s refugee agency said on Sunday:

(We have) credible information about an agreement signed yesterday between Syrian authorities and armed opposition groups inside Yarmouk.

We would welcome any durable and binding agreement that achieves a cessation of hostilities, full humanitarian access and an end to the suffering of civilians in Yarmouk and all of Syria.

More than 15,000 people remaining in the area, besieged by the Syrian military since July, have been denied food and medical care. The United Nations said more than 120 died over the winter from starvation and the cut-off of medical supplies.

The UN and other aid agencies have been able to bring in small amounts of assistance this year, only for the military to resume the siege.

Gunness said in late April, “It’s not enough. Demand for food is overwhelming. There are widespread reports of children with malnutrition, of people eating animal feed. It is beyond desperate.”

Yarmouk, with a mainly Palestinian population, had more than 200,000 residents before the Syrian conflict in March 2011.

Reports are coming in of a second night of Israeli strikes on Syrian military targets:

Syrian officials say four people were slain and nine wounded when the Israel Air Force struck several Syrian military targets overnight, after a 14-year-old Israeli was killed in the Golan Heights by firing from Syria.

An IDF spokesman said nine sites were hit by jets and guided missiles.

Three other Israelis, including the father of the slain teenager, were wounded on Sunday when an anti-tank projectile hit their vehicle. Israeli forces said they did not know if the attack was by Syrian forces or insurgents.

Reports are circulating that the Islamic State of Iraq and as-Sham has been able to recruit at least 200 fighters from insurgent territory in East Ghouta, near Damascus, by offering large amounts of money.

An EA source is cautious, however: “I’m not sure all of the recruits will actually fight when it comes to shootouts with the Islamic Front.”

The Islamic Front claims it has “captured important locations” in Western Qalamoun, between Damascus and the Lebanese border, pushing back the regime’s gains in its offensive since November.

The Front asserts that it, the Islamist faction Jabhat al-Nusra, and Ajnad al-Sham killed more than 200 Syrian troops and Hezbollah fighters.

The Islamic Front writes that the Islamic State of Army and as-Sham, moving beyond its battle with insurgents in northern and eastern Syria, has attacked in the Damascus suburb of Douma.

The Front said two ISIS members, wearing explosive belts, entered a market and started handing out leaflets. However, When people tried to stop them, the men threatened to detonate their explosives.

Residents persisted and took them to a Front checkpoint for arrest and trial. ISIS responded by attacking another checkpoint, killing some fighters and abducting others.

Top Inspector: All of Syria’s Chemical Weapons Out of Country

Sigrid Kaag, the head of the team overseeing the handover of Syria’s chemical weapons stocks, said on Monday that they are finally all out of the country.

The head of the OPCW, Ahmet Üzümcü, said the last chemicals were loaded on Monday afternoon aboard a Danish ship at the Syrian port of Latakia on the Mediterranean.

About 8% of the stocks had been held for weeks on a military base northeast of Damascus. The Assad regime said the material could not be transported safely because of fighting in the area.

Asked in Iraq about the news, US Secretary of State John Kerry said many issues about Syria’s chemical weapons program remained to be addressed, including the systematic dropping of chlorine gas canisters by regime warplanes.