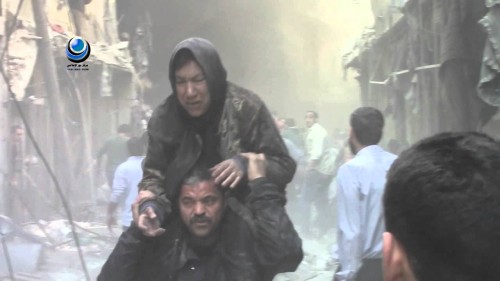 UPDATE 1800 GMT: A little girl is carried to safety after a strike on Naimeh in Daraa Province on Monday:

Airstrikes by Syria’s military on insurgent-held areas of Aleppo killed dozens on Sunday.

The attacks, including the extensive use of barrel bombs, have left hundreds dead since December and caused tens of thousands to flee. Yesterday it struck neighborhoods such as al-Shaar, where activists said more than 30 people died.

Aftermath of the bombing of al-Shaar:

Rescue teams look for survivors in the rubble:

Insurgents on the move northwest of Aleppo city:

Bianoun is on the highway between Hreytan and the regime-held village of Nubl and Zahraa.

Unconfirmed and conflicting reports say dozens of insurgents were killed in the Old City of Homs on Sunday.

Claims ranged from 29 to 60 killed. State news agency SANA said a car bomb was being prepared when it exploded prematurely. Other reports claimed a deadly regime strike, killing insurgent commanders and fighters. One activist said a rocket had hit an ammunition depot.

Anne Barnard and Mohammad Ghannam of The New York Times add other versions:

The explosion in the Old City of Homs occurred when a car bomb that rebels were preparing detonated prematurely. It killed 30 to 40 fighters, including two field commanders, according to insurgents reached by telephone and text message in the area….

One former insurgent…Abu Helmi, who evacuated recently to the Waer neighborhood from the Old City, said the explosion had been set off by fighters who favor a truce to eliminate some of the 300 hard-liners who oppose it. “It was an inside job,” Abu Helmi said he had been told by witnesses, “to kill the fighters who disagree with the truce”.

But Abu Bilal al-Homsi, an insurgent spokesman in the Old City, said that several groups, including the Nusra Front — which the United States has designated a terrorist organization — had been planning to use the car bomb to allow fighters to break out of the blockaded areas.

Father Francis Van Der Lugt, a prominent priest in besieged Homs, was killed by a masked gunman on Monday.

A fellow priest said Father Francis was shot inside a monastery in the insurgent-held Bustan al-Diwan neighborhood.

The priest spoke out about the suffering of civilians who were blockaded for months in the Old City of Homs. He continued to raise concerns during negotiations for an evacuation and assistance in January.

Hunger defeated us! We can see its signs drawn over the faces.

People are wandering the streets screaming; We are starving, we need food! They stop by the inhabited houses trying to find some food. Hunger breaks the rules and eliminates all moral principles.

We are living a scary reality. Human beings turn into wild animals living in the wild.

Van Der Lugt refused to leave Homs while there were still Christians in blockaded areas.

The opposition Syrian National Coalition has expressed its shock and sorrow, condemning the “cowardly act” and pledging “to bring its perpetrators to justice”. It said Father Francis “will always be remembered as a respectable priest and a man of noble character, who along with millions of Syrians, fell victim to regime oppression”.

Father Francis, speaking in early February about the humanitarian situation:

The priest also filmed an appeal at the start of the January crisis in the Old City.

Schoolchildren in the Damascus suburb of Moadamiya launch a spontaneous protest against the Assad regime:

Moadamiya was besieged by the Syrian military for more than a year before a ceasefire was agreed in January. Tensions continue, and the regime has put limits on assistance and movement of residents.

On his Brown Moses blog, Eliot Higgins complements our dissection of the latest conspiracy theory from journalist Seymour Hersh that insurgents, working with Turkey, carried out the chemical weapons attacks near Damascus on August 21.

See Syria Special: There is No Chemical Weapons Conspiracy — Dissecting Hersh’s “Exclusive” on Insurgents Once More

Higgins focuses on the munitions used in the attacks — the 122-mm “Volcano” rockets — linking them to previous assaults by the Syrian military:

1. The Syrian opposition captured some chemical Volcano rockets, without Sarin, which was then provided to the opposition by Turkey, or

Seymour Hersh fails to address how eight to twelve 2 meter long perfect copies of Volcano rockets were produced and transported from Turkey to Damascus, along with hundreds of litres of Sarin precursors, and the required equipment to mix it and pour it into the warheads.

The leader of Hezbollah, Sayyed Hassan Nasrallah, has declared the defeat of Syria’s insurgency.

Nasrallah said, in an interview with the As-Safir newspaper:

Nasrallah said he expected President Assad to stand for re-election in the spring, “It’s natural that he nominates himself, and I believe that will happen.”

Chris Gunness, the spokesman for the United Nations refugee agency, has tweeted about another regime cut-off of aid to the besieged Damascus neighborhood of Yarmouk:

A week has gone by without food 2 #Yarmouk. It's a long time in politics & a longer time if your stomach is empty RT pic.twitter.com/3rvCfTNR2s

Yarmouk has been blockaded by the Syrian military since last July, when insurgents took control of the area. The 17,000 residents who remain in the area have faced malnutrition, starvation, and lack of medical care, with activists saying that more than 100 have died because of the siege.

Since February, limited amounts of assistance have been allowed into Yarmouk, largely populated by Palestinians.

A spokesman for the US Director of National Intelligence has rebuffed the latest attempt by journalist Seymour Hersh to blame insurgents for last August’s chemical weapons assault near Damascus that killed hundreds of people.

Shawn Turner said in a statement:

The suggestion that there was an effort to suppress intelligence about a non-existent alternative explanation is simply false.

On Saturday, the London Review of Books — which published Hersh’s original attempt in December to discredit the insurgency and absolve the Assad regime — posted the reporter’s second article.

See Syria Special: There is No Chemical Weapons Conspiracy — Dissecting Hersh’s “Exclusive” on Insurgents Once More

Grand Mufti: If Syria Attacked, Our Suicide Bombers Will Hit US, France, & Britain

Syria’s leading cleric, Grand Mufti Sheikh Ahmad Badreddin Hassoun has said that suicide bombers are in the US, France, and Britain, and they will strike if those countries attack Syria:

I say this to all of Europe, and I say this to America: We will prepare suicide bombers, who are already in your country, to strike you if you strike Syria or Lebanon. After today, an eye for an eye and a tooth for a tooth and the initiator is the aggressor.”

After the first rocket hits Syria, Lebanese and Syrian children will set off for Europe and Palestine, where they will be martyrs.

Hassoun’s son was killed last week by gunmen near Ibla University on the Idleb-Aleppo highway.