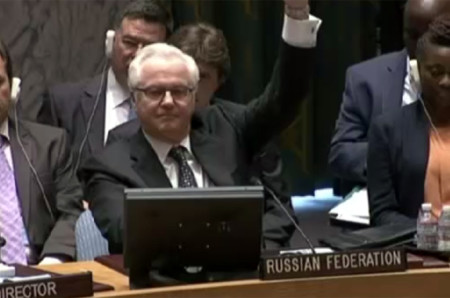 There are no doubts that this would be the first step towards justifying external interference. It was clear from the comments that co-authors of the resolution had made at the Security Council session. By realizing the consequences Russia and China vetoed the resolution.

Lavrov called for “resuming the Geneva negotiations and continuing the inter-Syrian dialogue in compliance with the coordinated agenda that calls for ceasing violence and fighting terrorism”.

The French-drafted measure would have referred the situation in Syria to the International Criminal Court for possible prosecution of war crimes and crimes against humanity by all sides. Almost 60 countries had expressed support.

The veto was the fourth by Russia and China in the 38-month conflict.

Today’s vetoes by Russia and China represent a disgraceful attempt to shield from justice those responsible for war crimes and crimes against humanity. For the past three years, Russia has aided and abetted Syria’s war machine through the provision of deadly weapons. Now its priority is to ensure that the atrocities committed with these weapons go unpunished. Today, China has chosen to place loyalty to Russia before the interests of justice. We hope that in the future China will exert greater independence in defining its own foreign policy priorities at the Security Council, including by standing with the Syrian people, who demand accountability.

The US and Britain also reacted sharply.

The US Ambassador, Samantha Power, said the Russians provided diplomatic protection to the Assad regime “no matter what it does“. On Twitter, she put out a chart matching the vetoes to the escalating death toll in the conflict:

British Foreign Secretary William Hague said Russia and China would have to justify “why they are continuing to shield those responsible for the most horrific atrocities”. the Reuters news agency reported.