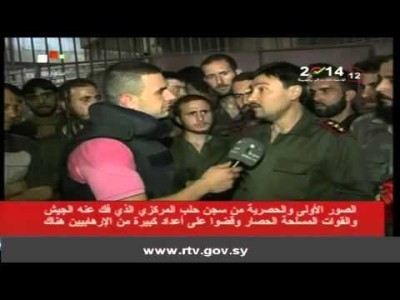 Now that regime forces have broken the siege of Aleppo Central Prison, can they move towards a grinding victory in Syria’s largest city, taking further territory north and east of the city to cut off insurgents who have held the eastern half for almost two years?

He notes the regime advances leading up to the symbolic entry into the Prison on Wednesday, including the al-Bureij roundabout and Haylan Hill, accompanied by the “steady barrage of surface-to-surface rockets and dozens of barrel bombs”. Insurgents blew up positions to deny them to the Syrian forces, including the al-Kindi Hospital, which had been converted into a Syrian Army barracks during the conflict.

Al-Halabi raises the fear of opposition activists that “the siege of East Aleppo (will) come after what Old Homs had witnessed”, with a two-year regime cut-off of supplies finally forcing an insurgent evacuation.

A siege on East Aleppo would be easily broken by rebel troops who are well entrenched in the Aleppo countryside. The biggest problem the rebel battalions face in Eastern Aleppo is a lack of coherence in areas such as Sheikh Najjar and Al-Bureij.

(In contrast) rebel battalions in West Aleppo, unified and coordinated, have made significant and steady advance on Jam’iyyat Al-Zahraa’ and Hay Al-Rashideen.

The military situation in Aleppo does not bode well for the Aleppan people. Water is still cut in rebel-held areas, same goes for electricity, as well as telecommunication services.

Rebel and loyalist control in Aleppo will witness drastic changes in the coming days. Rebels may attempt to react to the regime offensive. And regime forces (will) perhaps attempt another victory in time for the June 3rd elections.