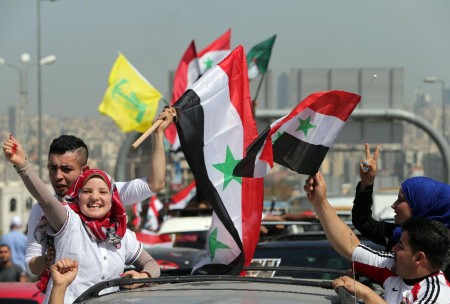 The Assad regime is celebrating Wednesday’s turnout in Lebanon, as some Syrians living abroad were able to cast advance votes in the June 3 Presidential election.

Of the more than 1 million Syrians in Lebanon — many of them displaced by the 38-month conflict — tens of thousands massed to cast ballots in the Syrian Embassy in south Beirut.

Cars and buses, often provided by the Lebanese organization Hezbollah, took voters to the Embassy. Others travelled several kilometers by foot. 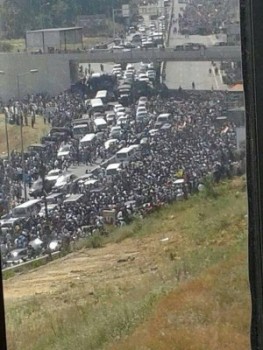 Syrian State news agency SANA declared “a landmark constitutional event which the Syrian citizens regard as a defying sign of steadfastness and defiance against the terrorist war raging in their homeland and determination to national principles”.

The agency did not complications in the ballot. Many voters could not reach the Embassy, and there were scuffles between frustrated Syrians and Lebanese security forces. At one point, soldiers could be seen using batons and sticks.

At the Embassy, there was little control of the balloting process. Anyone who could reach the small polling room — whether or not he or she was pre-registered — could vote without a check of their papers. The balloting was in public and under the eyes of the poll workers.

For the Syrian regime, this could be overlooked for the photos of Assad plastered on cars and minibuses and sometimes kissed by his supporters, the national flags, and t-shirts. Chanting for President Assad broke out periodically, even in the polling room, such as “Shabiha (militia) forever, for your sake, Assad” and “God, Syria, Bashar only”.

There were no images or signs of supports for the two nominal challengers to Assad.

The Embassy said 246,000 people cast ballots and voting will continue on Thursday.

Some countries, such as France, Belgium, and Germany, barred any balloting.

The Council of the European Union has renewed sanctions on the Syrian regime.

Adopted last May, the measures were due to expire on June 1. They now apply until June 1, 2015, with export and import bans, an oil embargo, and restrictions on investments, financial activity, and the transport sector.

Sanctions, including travel bans and asset freezes, were renewed on 179 individuals and 53 entities, including the Central Bank of Syria.

Claimed footage of civilians moving to rural areas of Idlib Province from cities, amid recent fighting:

Insurgents made significant advances last week in their offensive from Khan Sheikhoun to Ariha, taking the Khazanat base, the remaining regime checkpoints in southern Idlib Province, and strategic hills.

Medicines and medical supplies have reached the besieged Damascus suburb of Douma for the first time in 19 months.

The World Health Organization said Wednesday that two of its trucks were part of an aid convoy that reached the insurgent-held town in East Ghouta.

The convoy also brought food and other aid items into the town, which was hit by two airstrikes during the distribution.

The Syrian military has maintained a siege on Douma since November 2012.

Nearly half of Douma’s 50,000 inhabitants are in need of medical assistance, “including urgent surgical care and life-saving treatments”, the WHO said, with surgeons forced to perform operations “under extremely difficult circumstances”.

An Aleppo-based activist claims that the Syrian military, which broke a long insurgent siege on Aleppo Central Prison last week, is turning the complex into a base for an offensive north of Syria’s largest city.

Ahmed al-Ahmed said the military began moving more than 2,000 prisoners on Saturday, taking them to a school west of Aleppo. Dozens of detainees with communicable diseases were moved to a hospital, and about 60 female prisoners were taken to a reform center in the center of the city.

The Prison is located a few kilometers north of the city center. It has been anticipated that Syrian forces would now move to the west, trying to cut supply lines to insurgents holding the eastern part of Aleppo.

United Nations Secretary General Ban Ki-Moon has written that the handover of Syria’s chemical arms stocks will not be completed by the deadline of June 30.

In a May 23 letter to the Security Council, Ban said about 8% of the stockpile remained in Syria. One of Syria’s 12 storage facilities is not yet closed, and only five of 18 production facilities have been shut.

One source claims much of the remaining stocks are probably in or near the “Battalion 559” complex, about 63 kilometers (39 miles) northeast of Damascus on a major road from Adra to Palmyra. Insurgents and regime forces have been fighting in the area for weeks.

See Revealed — Where Assad’s Last Chemical Weapons May Be Stored

Meanwhile, the Organization for the Prohibition of Chemical Weapons confirmed that its inspectors had been attacked and briefly abducted on Tuesday when they tried to inspect Kafrzita in Hama Province, the site of several chlorine attacks by the regime since April 11.

The OPCW said a roadside bomb disabled the lead vehicle in the convoy, and gunmen ambushed as the experts were retreating in two other vehicles. The inspector were briefly detained but released after intervention by insurgents.

The organization did not say who carried out the attack. The Syrian regime and insurgents have blamed each other.

A car bomb in Maarat an-Nasan on Wednesday killed at least 13 people and wounded scores:

While footage of the explosion is circulating widely, there is no indication of who — the Assad regime, the Islamic State of Iraq and as-Sham, or insurgents — planted the device.