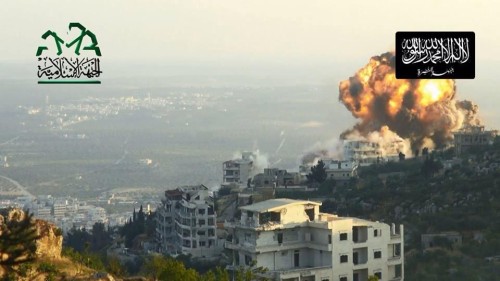 Week Past, Week Ahead: Syria — A Regime Turning Point in Aleppo? Not Quite.

UPDATE 1545 GMT: The regime has retaliated for the loss of positions near Khan Shaykhoun with barrel bombs on the Salaam checkpoint, overrun by insurgents earlier today, and the west of the town.

Sources, supported by video, claim that chlorine gas has been used yet again:

The Salaam checkpoint is east of Khan Shaykhoun:

Insurgents took a regime base in Idlib Province in northwest Syria on Sunday, and they are threatening to remove some of the last checkpoints in the south of the province.

The Islamic Front and Jahbat al-Nusra, in operations that included six suicide bombings, attacked from Khan Shaykhoun north to Ariha.

The insurgents took control of the Khazanat base, near Khan Shaykhoun and just east of the main highway between Damascus and Aleppo. The base was the supply of fuel and most of the ammunItion for regime checkpoints — many of whom have been seized by the opposition in recent weeks — in the area.

Reliable sources said up to 200 Syrian troops were killed and many were captured.

Other regime positions between Maarat al-Nu’man and Khan Shaykhoun were overrun.

A suicide bombing and claiming of territory east of Ariha:

Footage of two of the suicide bombs detonating soon after each other near Khan Shaykhoun:

Video after the capture of the Khazanat base:

Celebration of the victory:

State news agency SANA’s only reference to the fighting is “Army units confronted armed terrorist groups that were trying to attack a number of military posts in Ariha in the surrounding of Jabal al-Arbaeen in the countryside of Aleppo”.

The insurgency is now looking to take the last regime checkpoint, Salaam, near Khan Shaykhoun. The Syrian military is trying to recover by diverting troops from the battle for Morek in Hama Province.

If successful in claiming the bases and cutting the highway, the insurgents would detach the regime’s land supply from Damascus to Aleppo and from Idlib to Latakia on the Mediterranean coast.

(PHOTO: One of the suicide bombings near Khan Shaykhoun on Sunday)

“The decision comes after Suleiman’s repeated insults to Jordan and its leadership, institutions and citizens, through his meetings, writings and social media websites,” she said.

Jordan warned Suleiman in June 2013 to stop criticizing Amman on social media, accusing it of being a puppet of the US and Israel, or face expulsion.

Syrian warplanes fired at least four rockets on the outskirts of the border town of Arsal in northeast Lebanon on Monday.

There is no word of casualties.

Arsal is home to many displaced Syrians and has been attacked on several occasions by Syrian aircraft. Damascus claims it is pursuing “terrorists” — its label for insurgents.

The Islamist faction Jabhat al-Nusra has claimed car bombs in the Zahra district of Homs that killed at least 10 people on Sunday.

Jabhat al-Nusra, posting a series of photos, says it was striking regime militia and attacked the troops with Grad rockets in the chaos after the car bombs exploded. 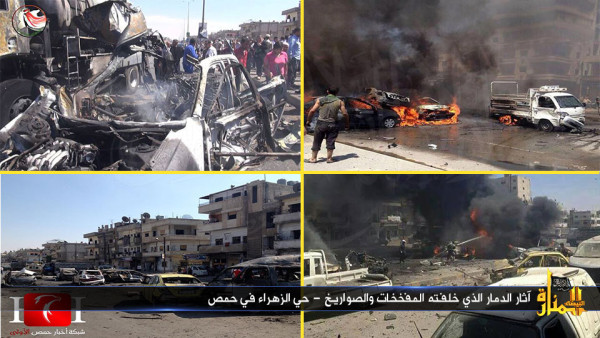 Iran condemned Syrian National Coalition head Ahmad Jarba on Sunday, while confirming that it will send monitors to the Presidential election on June 3.

Deputy Foreign Minister Hossein Amir Abdollahian pronounced, “In our opinion, when it comes to politics, Ahmad Jarba is a weak person….He is the most inappropriate person for the future of Syria.”

The criticism followed Jarba’s meeting with Maryam Rajavi, the head of the People’s Mujahedeen Organisation of Iran, the political wing of the Mujahedin-e Khalq (MEK). Tehran considers MEK, which has pursued the violent overthrow of the Islamic Republic since 1980, a “terrorist” organization.

Abdollahian said, “(Jarba) does not know who to meet in his foreign meetings.”

Iran’s announcement of election observers complements Russia’s statement that it will send two monitors to the June 3 ballot, in which President Assad faces two nominal challengers.