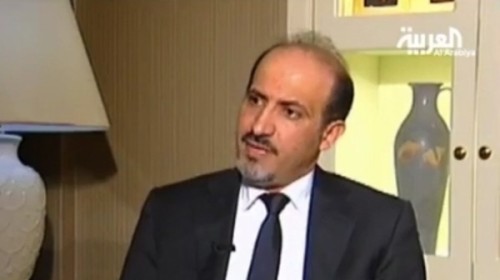 Syrian National Coalition leader Ahmad Jarba (pictured) has said that the opposition could enter a new round of Geneva peace talks if the Assad regime is “sincere”.

Jarba was in Beijing for talks with the Chinese Foreign Ministry, as the Coalition claimed that it sensed China’s stance on the conflict in Syria had begun to change.

Beijing has joined Russia in the United Nations Security Council to limit international intervention during the Syrian conflict.

“This is the first time for us to visit China and we have placed our hope on it,” Jarba told Foreign Minister Wang Yi. “If the Syrian government is sincere, the National Coalition is willing to join the third round of talks in Geneva.”

Wang said Syria had reached a “critical moment”: “The international community has been expecting a third round of talks and China would like to contribute.”

The two rounds of discussions in Switzerland in January and February yielded no progress. The opposition said President Assad must stand aside for a transitional governing authority, but Damascus refused to even put this on an agenda, claiming that the priority must be to fight “terrorists”.

Video: Moment When Barrel Bombs Hit Near Insurgents in Morek in Hama Province

For weeks, regime forces have been attacking the insurgent-held town, which lies on the main highway from Hama north to Idlib Province.

This update has been moved to a separate feature.

Footage of insurgents in the nearby al-Zahraa neighborhood:

State media said at least 14 people were killed and 50 wounded when a car bomb exploded outside a mosque in Homs on Friday.

The bombing occurred as worshippers were leaving Friday Prayers at the Bilal al-Habshi mosque on the edge of the Akrama neighborhood. 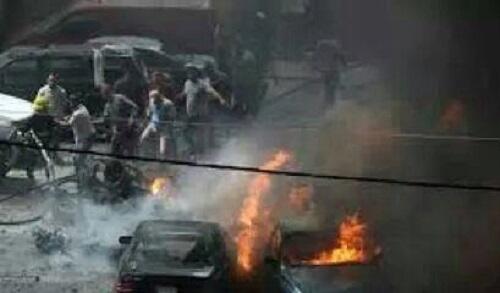 Islamic State of Iraq Confirms Break With Al Qa’eda: “No Longer A Base of Jihad”

The Islamic State of Iraq and as-Sham has confirmed its break from Al Qa’eda, declaring that the international organization is “no longer a base of jihad”.

ISIS, which has been battling Syrian insurgents since January, repudiated Al Qa’eda soon after al-Suri’s death.

Its leadership has become a hammer to break the project of the Islamic State….the leaders of al-Qaeda have deviated from the correct path….

They have divided the ranks of the mujahideen (holy warriors) in every place.

United Nations Security Council members have expressed grave concern over civilians in the Old City of Homs, amid a regime siege and attempt by the Syrian military to take over the area.

The Council “urged the immediate implementation” of a February resolution to improve humanitarian access in Syria.

In the aftermath of the resolution, passed amid stalemated talks in Geneva between the regime and opposition, some civilians were evacuated from the Old City but the Syrian military continued to block aid.

France and Britain had proposed a draft formal declaration demanding that regime forces lift the siege, but it was not adopted.

Russia has held out against any Council resolution mandating action by Damascus.

French ambassador Gerard Araud said Moscow was again blocking any measures, as US ambassador Samantha Power appealed “to all those UN member states with influence on Damascus to pressure the regime to return to the negotiating table”.

Power said, “It is imperative that those who want to leave Homs are able to do so quickly and safely.”

Russian ambassador Vitaly Churkin blamed Western countries for the failure to agree action, “We discussed the text for two hours, but they refused to adopt very essential elements — our call for supporting the local reconciliations, support (of) the resumption of the Geneva talks without any reservations

Syria’s ambassador Bashar al-Jafari told reporters that only 170 civilians were trapped in Homs, alongside “thousands of terrorists” — most of them foreign fighters.

Al-Jafari also complained that “American-Franco-British mixed diplomacy” was ignoring “Turkish-backed terrorism against Kassab”, the village near Turkey’s border taken by insurgent last month at the start of their offensive in Latakia Province in western Syria..

Jabhat al-Nusra Tribute to Its Slain Commander in Idlib Province

The Islamist faction Jabhat al-Nusra has posted a tribute to its slain commander in Idlib Province, Abu Muhammad Fateh.

Jabhat al-Nusra claims that Abu Muhammad Fateh, his brother Abu Rateb, and their families were attacked by four gunmen. Both men were killed as well as Abu Rateb’s wife and Abu Muhammad Fateh’s daughter. Other relatives were seriously injured.

The killings come amid fighting between the Islamic State of Iraq and as-Sham and insurgents in northwest Syria.

Abu al-Joud, head of the pro-opposition Homs al-Hadath News Network, claims that this week’s regime offensive in Homs has been repelled.

Syrian forces were seeking to take over some of the remaining insurgent-held areas in Syria’s third-largest city, but Abu al-Joud said, “The regime was taught a lesson …as a number of its soldiers fell. Now, the shelling has returned but there is (no attempt to) seize (territory), and there is not a meter of advance.”

While claiming the defeat of the attack, the journalist said, “If no support comes from battalions outside of (Old Homs), the situation will get worse.”