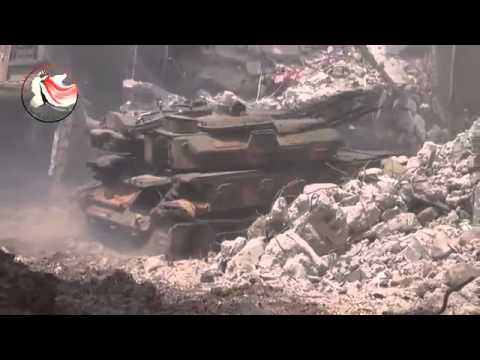 UPDATE 1425 GMT: A claim that the insurgent counter-attack in Homs has been blocked by airstrikes:

Clashes are still ongoing in Jub al-Jandali, in central-#Homs. But the rebellion breakthrough has now ceased in the area. Heavy airstrikes.

UPDATE 1400 GMT: Claims are circulating that insurgents counter-attacked in Homs, moving into the western half of the Jub al-Jandali section following a car bomb that killed Syrian troops and militiamen of the National Defense Force.

BREAKING – A first serious report is abt more than 25 loyalists killed in the car bomb. Some from #SAA ranks, some from local alawite #NDF.

State news agency SANA acknowledged the car bomb near the Ka’ab al-Ahbar mosque but not note any casualties.

If the insurgents can claim Jub al-Jandali, they would be only a few hundred meters from escaping the siege of Homs and moving into the countryside.

Some mainstream media are headlining the regime’s ground offensive in Homs, Syria’s third-largest city, against the remaining insurgent-held areas.

A “security source” said the Syrian forces were “capturing buildings and tightening the noose around the terrorist groups”, a claim reinforced by State media. However, local citizen journalists have said that the regime’s attempts to close on the Old City — where most of the remaining insurgents are based — have been checked.

Meanwhile, insurgents have been stepping up pressure on regime forces in the western half of Aleppo, Syria’s largest city. Continuing offensives in the northwest and south were accompanied by attacks on Syrian positions in the center of the city, such as the Hanano base and the Aleppo Citadel.

Both cities have been in military stalemates since 2012. While regime forces leveled much of Homs, a center of protest against President Assad, they were unable to claim pockets of resistance. Aleppo has been divided since July 2012, when insurgents entered the city and took much of the eastern half.

Insurgents near the Hanano base in central Aleppo:

EA sources have confirmed a report, from Radio Free Syria, that two Free Syrian officers in Homs surrendered to regime forces after threats to kidnap, rape, and kill their wives and children.

The Syrian military has been trying to pacify insurgent-held areas of Homs, both through the surrender of remaining opposition fighters and through aerial and ground assaults.

Colonel Fatih Hassoun, the Commander of the FSA General Staff for western Homs Province said the officers felt they had no option but to capitulate, given the danger to their families.

Four French journalists, kidnapped by the Islamic State of Iraq and as-Sham last June, were found by Turkish soldiers on the border with Syria on Saturday..

Nicolas Henin, Pierre Torres, Edouard Elias, and Didier Francois were found in Sanliurfa Province with their hands and eyes bound. 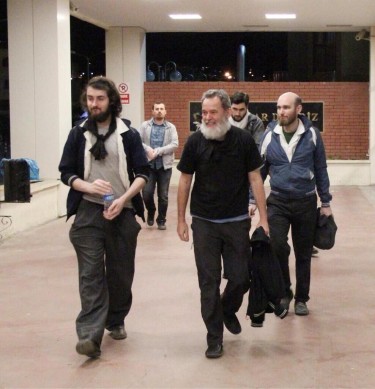