Syria Analysis: What the Saudis Told Obama — A 3-Point Guide 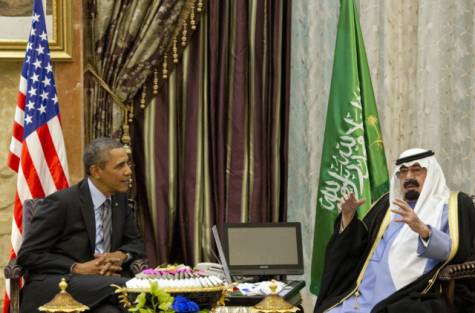 Remarks by US officials after President Obama’s two-hour meeting with King Abdullah of Saudi Arabia on Saturday were predictably bland.

The officials assured reporters that, despite “tactical differences”, two men had agreed that strategic interests were aligned. They tried to show American strength, as well as assurances to the Saudis, through the prop of Iran:

I think it was important to have the chance to come look (Abdullah) in the eye and explain how determined the President is to stop Iran from getting a nuclear weapon….(We) “won’t accept a bad deal and….the focus on the nuclear issue doesn’t mean we are not concerned about, or very much focused on, Iran’s other destabilizing activities in the region

As for Syria, Obama’s men set out the shared objective of “political transition” and “supporting moderate opposition”.

Which is pretty much what Washington has been saying for months, even as it backed away from intervention after last August’s chemical weapons attacks by the Assad regime.

No, if you want the significance of what happened behind closed doors, you have to read the leaks from the Saudi side.

They put out the story through Gulf News, the day after the Obama-Abdullah encounter.

1. OBAMA TOLD SAUDIS THAT HE WILL SUPPORT MILITARY AID — BUT WILL HE LIVE UP TO THE PROMISE?

President Barack Obama’s visit to Saudi Arabia on Saturday came with a decision to dramatically expand America’s covert programme to assist the Free Syrian Army, a key concern for Saudi Arabia which has been struggling to topple the presidency of Syrian leader Bashar Al Assad.

According to Saudi sources, this is the single most important pledge made by Obama to King Abdullah Bin Abdul Aziz, which would now translate into accelerated military transfers from Saudi stocks blocked in Jordan for several months.

That claim is not out-of-line with what some US officials have been spinning through suitable outlets — see last Friday’s column by David Ignatius of the Washington Post — although the Saudis add the word “dramatically” to play up the commitment.

But the Americans have said this before, only to pull back from the military aid and even block the attempts of its Saudi allies to provide the weapons. So will they come through this time? The Saudi officials put the question in the Gulf News account:

It remains to be determined what type of weapons will be transferred or whether Washington will accept that Riyadh hand over shoulder-launched surface-to-air missiles known as Manpads (Man-portable air-defence systems) to end the devastating use of air force planes and helicopters by the Syrian Arab Army in bombarding civilian targets.

2. THE SAUDIS ARE SUSPICIOUS OF THE OUTCOME

Riyadh is far from assured by the President, whatever his stated intention — and it will not give way if Obama wavers again:

For its part, Riyadh continues to perceive Washington as a solid ally, though it remains to be determined whether Obama professed any reciprocity….

King Abdullah stressed his desire to see Washington rise to the occasion.

3. AND THE SAUDIS ARE NOT BACKING AWAY FROM THE INSURGENCY

There has been much chatter in recent weeks about the Saudis cutting loose the insurgency, withdrawing their aid and political support. That talk has been fuelled by King Abdullah’s order last month to punish Saudis who fight in Syria with sentences of 3 to 20 years.

That analysis makes the error of conflating Saudi concerns about foreign fighters, especially those with the Islamic State of Iraq and as-Sham, with its objectives in Syria.

The Saudi regime is wary of jihadists who return and threaten internal security, but that does not diminish its backing of a “local” insurgency of Syrians against the Assad regime. King Abdullah’s statement to Obama made clear that it is not just “private” Saudi donors who will keep money and weapons moving to that insurgency — the monarchy is also behind the effort.

How much aid makes it to the insurgents is another matter, of course. The Americans may continue to hinder deliveries, especially in southern Syria. The effort can always be complicated by tensions between insurgent factions, which has divided Saudi Arabia and Qatar in the past.

However, the signs are that the formation of the Islamic Front, whose military leader Zahran Alloush was long based in Saudi Arabia, has eased some of those tensions. Coordination between the Front and the Free Syrian Army — and indeed between the Front and the Islamist faction Jabhat al-Nusra — has been apparent on the ground. And while fighting continues with the Islamic State of Iraq and as-Sham, the insurgent push against the Iraqi-led group is likely to boost the chances of foreign support.

Last October, after President Obama’s retreat from intervention, we assessed the Saudi response, not only in Syria but in Egypt:

Six months later, the Saudis have repeated that message to President Obama.