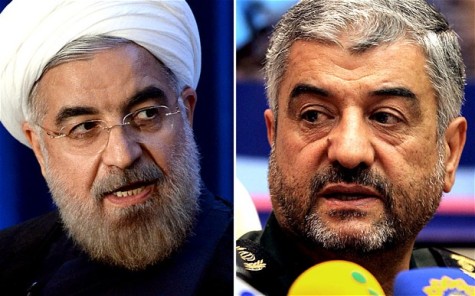 LATEST: MPs Ask For Investigation of Attack on Political Prisoners

The head of the Islamic Revolutionary Guards Corps, General Mohammad Ali Jafari, has issued another warning to President Rouhani.

Jafari told a Monday press conference of the Guards’ duty to monitor the Government:

To this end it is possible for the IRGC to give some warnings or perform its role based on its natural mission, which is preserving the Islamic Revolution.

The IRGC has defied Rouhani’s command, issued last autumn, to stay out of politics. While it has refrained from opposing nuclear talks — because of the Supreme Leader’s endorsement of the negotiations — it has pressured Rouhani to maintain Iran’s fundamental demands. On other issues, it has gone farther, warning of Government leniency on social and cultural matters and criticizing Foreign Minister Mohammad Javad Zarif over his comments on military matters.

The prospect of tension has also increased this month with the imminent introduction of the Government’s economic proposals, notably on privatization, which could affect Guards’ interests and investments.

Jafari was careful not to declare open opposition to Rouhani, “It is possible here for the IRGC’s revolutionary role to appear to be in opposition with some administrations, which is not true.”

He also said, “The movement of the IRGC and the administration are completely in line,” but then added the caveat, “unless in some specific instances where there is conflict with the fundamentals of values and the people’s beliefs”.

Meanwhile, the political deputy of the IRGC, General Rasoul Sanaei Rad, intervened on the economic front:

The IRGC has been unfairly accused of economic activities and political meddling for profit seeking in the domestic arena….Some groups that are affected by the foreign environment, lack attention to the revolution’s values and deviate from the pure criterion of the revolution are continuously beating on the drum of attacking the IRGC.

An example of those economic activities? The construction of new metro lines in Mashhad and Tabriz.

MPs Ask For Investigation of Attack on Political Prisoners

Thirteen MPs have asked Minister of Justice Mostafa Pourmohammadi for an investigation of last week’s attack on political prisoners in Ward 350 of Evin Prison.

Opposition website Kalemeh claims that more than 30 prisoners were injured, four of them seriously, after Intelligence Ministry officials and guards beat them over a protest about “aggressive inspections”.

Twelve prisoners are on hunger strike over the incident, and 28 have written President Rouhani, asking for an investigation.

Mr President, you promised to improve the economy fundamentally! But everything is becoming more expensive and more factories are shutting down….

Mr President, the Iranian passport was supposed to become more respected but now even official passports have no value due to your diplomacy. Americans did not allow your representative to the UN and this is an unprecedented disrespect….

But what’s more worrying is the interference of the wives and families of the officials in the governing the country and state finance….
If your wife wanted to celebrate Mother’sDday, she should have held the celebration in her own house or a mosque or a hussainieh (religious site), not in the Presidential Palace which belongs to the nation and with State funds.

Hossein Nouraninejad, a political activist and member of the reformist Islamic Iran Participation Front, was arrested on Monday.

Parastoo Sarmadi, Nouraninejad’s wife, said officials entered their home with an arrest warrant and said her husband would be taken to Ward Aleph of Evin Prison.

Nouraninejad was arrested in September 2009 and served one year in jail for propaganda against the regime.

Iran’s automobile manufacturing fell 20.2% between March 2013 and March 2014, according to official statistics.

The change of Government has not revived the industry — output fell 5.1% in March 2014 compared to March 2013.

The industry has suffered from a lack of components, as parts manufacturers have been unable to get imports amid US and European sanctions and have also been hindered by lack of support from Iranian banks.

Many of the factories have gone bankrupt or switched to other areas of production.

Official: 5+1 Powers Do Not Have to Formally Recognize Iran’s Nuclear Rights

The spokesman of Iran’s Atomic Energy Organization, Behrouz Kamalvandi, has indicated that the 5+1 Powers do not have to formally recognize Tehran’s nuclear rights in a comprehensive agreement.

In an address at Allameh Tabatabaei University, Kamalvandi said it had been an error in previous discussion to insist on formal recognition, although “we fundamentally have the right and should not wait for gaining legitimacy by recognition of these rights by westerners”.

Last November’s interim nuclear deal was held up for two weeks when France objected to a clause in the preamble recognizing Iran’s nuclear rights.

Kamalvandi said those rights to uranium enrichment for a peaceful nuclear program were effectively granted by Iran’s participation in the Nuclear Non-Proliferation Treaty.

Head of Revolutionary Guards: No Iranian Troops on Syrian Battlefield

Islamic Revolutionary Guards Corps head Mohammad Ali Jafari has repeated that the Iranian military’s support for the Assad regime in Syria is limited to advice and training of militia.

Jafari said Monday, “Considering Syria’s human resources and the presence of its people, there is no need for the military interference of others, and we merely provide them with experiential training and software and we are now witnessing its results after these years of conflicts.”

Jafari said in September 2012 that the Guards were helping train a National Defense Force of 50,000 members, as well as helping Damascus with intelligence, logistics, and reconstruction. However, he has always denied that Iranian troops are involved in Syria’s conflict.

On Saturday, the commander of IRGC Ground Forces, General Mohammad Pakpour, said Tehran only has military attachés in Syria.

Videos have shown Iranian officers training and leading Syrian militia in small-scale operations, and Iranian media has acknowledged the losses of members of its military — although always framed as part of the defense of the Sayyeda Zeynab shrine in southern Damascus.

While ruling out direct involvement in Syria’s conflict, Jafari emphasized the Guards’ support for President Assad:

The (Islamic) Revolution is opposed to the hegemonic system and the new world order and all of the foreign policy slogans and positions are based on this pivot, including defending the Palestinian and Syrian people who are today targeted by the enemy.”

The IRGC should be the guardian of the Revolution within and outside the borders.

Iran Oil Exports to China Increase By 36.1% Over Last Year

Amid a recovery in Iran’s oil exports, Tehran’s shipment to China in March were up 36.1% compared to March 2013.

Iran’s oil exports for February 2014 are estimated at 1.6 million bpd, more than double the historic low of 2013.

The US has said that Tehran’s exports should be capped at 1 million bpd under last November’s interim nuclear deal.

Rouhani to Families: Thank You for Not Taking Support Payments

As the Government tries to reform the subsidy cuts program, President Rouhani has thanked households who voluntarily exempted themselves from support payments to cover higher prices.

The Government, claiming the Ahmadinejad Government’s first phase of cuts has led to costs far exceeding revenues, plans on implementing a second phase this spring. It is trying to limit support payments — set at $18 per month per person — to the less well-off.

Rouhani promised a “transparent report” on the cuts and support payments and asserted . He then added that upcoming fuel price increases will not cause significant problems.

A queue in Tehran for gasoline on the eve of the second phase of subsidy cuts: 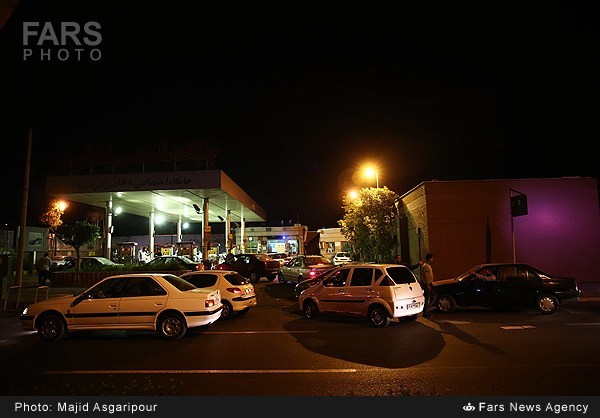