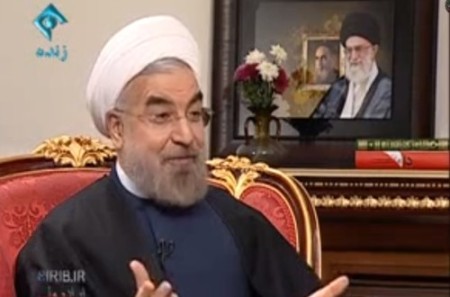 Now a well-placed EA correspondent in Iran offers the full story, writing of a contest that has been building since Rouhani’s campaign last summer — and pointing to a future battle between the President and “hard-line” opponents.

Is President Rouhani preparing for a final showdown with the head of State broadcaster IRIB?

The conflict between the President and IRIB chief Ezzatollah Zarghami is in sharp contrast to Zarghami’s unflinching support of Rouhani’s predecessor Mahmoud Ahmadinejad between 2005 and 2013.

Under Zarghami’s management, the IRIB was so enthusiastic about the Government and its policies — especially after the disputed 2009 election that gave Ahmadinejad “victory” over challenger Mir Hossein Mousavi — that it was seen by many as Ahmadinejad’s propaganda agency. In a final touch, Zarghami held a farewell ceremony for Ahmadinejad and his Cabinet last time, the first time since 1979 that IRIB had expressed such appreciation for an outgoing Government.

Zarghami is in his final year as the head of IRIB, but Rouhani’s office fears that he will use the period to attack the President. That concern is reinforced by widespread stories of Zarghami’s political ambitions and links to “hard-line” opponents of Rouhani.

So only a few days after he formed his Government last summer, Rouhani — who had said during his campaign that the State broadcaster was “not fair” as “many were oppressed and insulted” — went on the offensive, “It has been brought to my attention that, on the one hand, IRIB insignificantly reflects the important news of the President and the country. On the other hand, it tries to give voice to radical forces and opposition, broadcasting their news and damaging the reputation of the Government in people’s eyes.”

The President’s staff believed that, despite or because of the criticism, IRIB has continued to slight Rouhani. The broadcaster has limited coverage of the Government’s diplomatic activities, including Rouhani’s speech in the United Nations last September.

During the trip to New York for the UN address, recordings of three of Rouhani’s speeches, his interview with America’s NBC television, and his press conference — seen as important for nuclear discussions and engagement with the US — were broadcast by IRIB at the same time as high-profile live football matches were being shown on another channel.

Sources say the President’s office finally complained to the Supreme Leader, forcing Zarghami had to appease the Government by attending a Cabinet meeting.

Any hope of a reconciliation was soon dashed. In January, IRIB criticized Rouhani’s team at the World Economic Summit in Davos, Then last month, an angry dispute erupted over Rouhani’s live prime-time interview on IRIB: a conflict over the choice of interviewer led to a delay of more than an hour, with the President apologizing to followers on social media.

Even as the delayed interview was being broadcast, Zarghami released a letter to the head of IRIB’s Supervisory Council, asking for his intervention. The President’s office objected that the Council has no role in the selection of interviewers, and added that Mahmoud Ahmadinejad had always been allowed to choose his questioner in his prime-time appearances.

Far from backing down, IRIB refused to cover some of the Fajr Film Festival, warning that “pro-sedition” filmmakers were returning to the cinema and deriding Minister of Culture Ali Jannati. A children’s program appeared to ridicule Rouhani by holding up a large key — the President’s campaign symbol, opening the Government to the public — with the inscription “Lie”.

Hesamuddin Ashna, Rouahini’s representative on the IRIB Supervisory Council, said: “IRIB considers itself as the supervisor on Judiciary, parliament, government and the country, but itself does not agree to undergo supervision. I wish the voice in IRIB was the nation’s voice, not the voice of a certain political party or group.”

The head of the Council, Bijan Nobaveh, demanded that the President remove Ashna. “Hard-line” outlets, such as the Revolutionary Guards’ Fars and Tasnim defended Zarghami and attacked the Government, bolstering their position with interviews of officials of the anti-Rouhani Endurance Front. MPs challenged the President, with one declaring, “Some failed currents are seeking to break IRIB.” A leading cleric asserted, “The government should know that IRIB does not specifically belong to it and thus cannot be controlled by them.”

The Supreme Leader’s support for Rouhani, particularly over nuclear discussions, has curbed IRIB. For example, Zarghami rejected the request of MPs opposed to the interim deal with the 5+1 Powers for a televised debate.

However, it is unlikely that the conflict will end. This is far more than a personal spat between Rouhani and Zarghami, or even a Government-IRIB affair. It is part of a fight between the President and “hard-line” conservatives — such as the head of the Endurance Front, Ayatollah Mesbah Yazdi — for power.

For now, Rouhani is in a stronger position, simply because of the imminent expiry of Zarghami’s term as IRIB head. The President’s likely choice of successor, Rahmani Fazli, is close not only to Rouhani but also Speaker of Parliament Ali Larijani and head of judiciary Sadegh Larijani.

However, in recent days, the President’s opponents have floated the idea of establishing private TV channels. One report said the Revolutionary Guards, with Zarghami’s support, are trying to set up Asr (Era) TV to produce programs at a “critical time”. The Guards immediately denied the story, but it has continued to circulate.

Once more, the resolution — if there is one — may lie with the Supreme Leader. If he continues his support of Rouhani, then Fazli will be appointed as the new chief of IRIB and the Government will have a far more favorable State outlet. However, if Ayatollah Khamenei begins to waver, for example over the contacts with the US and Iran’s economic situation, then the President may find himself embattled on the airwaves as well as behind closed doors.