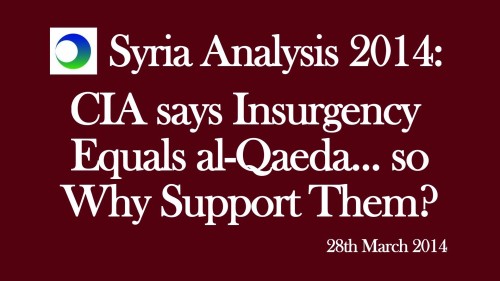 A five-minute analysis dissecting a statement by CIA Director John Brennan that Al Qa’eda has infiltrated Syria’s insurgency, recruiting and training jihadists for attacks on the US and Europe — “the ultimate nightmare of the so-called ‘Arab Spring'”:

What Brennan told Congress was, “You can’t trust the Syrian insurgency. You can’t really believe they might be fighting for democracy and rights and justice.” You might have to think they are fighting for terror and against America, rather than against Assad.

What he was doing was telling a story — a myth, if you will — to justify the US retreat from the insurgency….

The issue is no longer chemical weapons. It’s no longer barrel bombs. It’s not the 10,000s who are held in Syrian prisons and the thousands who have died, probably from abuse and execution.

So why don’t we all go home?