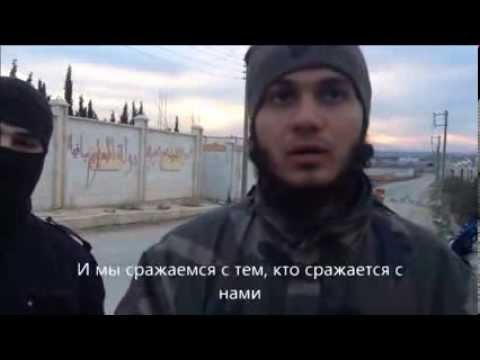 FiSyria, the website close to the Islamic State of Iraq and as-Sham’s Chechen military Amir Umar Shishani, has posted a Russian-subtitled video in which an ISIS fighter talks about outreach and conflict with insurgent factions in Syria:

It is not clear exactly when the video was shot, but it looks to be some time after the fighting between ISIS and insurgent groups began at the start of January.

Transcript of the Russian subtitles:

We are in one of the checkpoints of the Islamic State of Iraq and as-Sham. We have prepared several brochures on the topic of religion, recruitment, monotheism, creed and which actions can bring a person from Islam.

We connect our hearts with them and love them for the sake of Allah. We want people to understand the essence of ISIS, that we are not takfiris, we don’t call Muslims or the Syrian people takfiris.

Because they are trying to defame us, they tell lies about us. And we turn to Allah for help, Allah is sufficient for us as a patron and helper….

Let them even hate us or judge us.

This is the Sharia of Allah.

We left our homes only to spread the Sharia of Allah.

We are against Bashar (President Assad) but what about after Bashar?

Destruction of countries, destroying all the foundations, theft?

Will the brigades of the criminals be left, those that make people suffer?