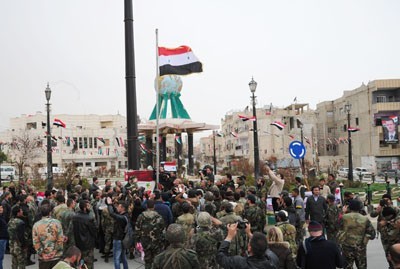 Syria’s State news media are celebrating the capture of Yabroud, the largest city in the Qalamoun region, with the raising of the regime flag in al-Ossoud Square in the center.

The Syrian commander of the Yabroud operation, which lasted more than a month, declared, “I came here to congratulate the armed forces for this landmark victory which we dedicate to the Syrian people and President Bashar al-Assad.”

Photos showed dozens of people in the square. Many of the 60,000 population of Yabroud, 62 kilometers northeast of Damasacus, fled for Lebanon amid the weeks of regime bombardment.

Commander Badi Ali said victory in Yabroud was the “response to everyone who dared launch an aggression against Syria and its valiant army which is ranked amongst the strongest armies in the world” and proclaimed, “We are coming to bring back security and stability to you and eliminate terrorism in every inch of the Syrian land.”

Meanwhile, insurgents are regrouping in nearby villages and expressing concern about limited supplies of weapons in the face of the assault by the Syrian military and Hezbollah.

One fighter said, “We couldn’t last longer than we did with the simple weapons we had as there were thousands of Assad and Hezbollah forces.” A sympathetic doctor in the Lebanese town of Arsal, where many refugees from Yabroud fled, echoed, “The weapons that were promised never arrived.”

Military assistance to insurgents has been hindered for months by US reluctance, to the point of blocking supplies by other foreign supporters, and more recently by division between Saudi Arabia and Qatar. The Saudi regime also may be trying to imposing restrictions on suppliers to the insurgents.

Footage from Tuesday of the latest insurgent attack on the Old Justice Palace in Aleppo:

Four Israeli soldiers were wounded by a roadside bomb in the Golan Heights near the Syrian border on Monday.

One of the injured is in serious condition.

The bomb was planted near the border fence in Majdal Shams. Israeli forces responded with artillery fire on several targets.

Sources have said rockets landed on March 9 near the main transit point for Syria’s chemical weapons.

Under a deal reached after the Assad regime’s chemical weapons attacks last August, Damascus is supposed to take its chemical weapons stocks to the port of Latakia, where they will be loaded on international ships for destruction at sea.

Four of the rockets in the March 9 attack hit land and one fell in the sea. One struck about 500 meters from the accommodation of experts overseeing the handover of the stocks.

The Assad regime, which has missed a series of deadlines for handover of the chemical weapons, has blamed security for delays in transport to Latakia.

A report by a UN team of human rights investigators, covering “the most egregious violations committed during the period of 20 January to 10 March 2014”, has added Syrian officials and members of the Islamic State of Iraq and as-Sham to a list of suspected war criminals.

Paulo Sergio Pinheiro, the chairman of the inquiry, said those named were “criminally responsible for hostage-taking, torture, and executions”. Heads of Syrian intelligence branches and detention facilities, military commanders, and officials are accused of torture and sexual violence, and ISIS fighters are cited for “mass executions of detainees”. The Kurdish YPG is also named for abuse of captives.

Both regime forces and opposition groups are accused of “unlawful attacks”. Syrian forces are cited for aerial warfare, including barrel bombing, while both sides are condemned for artillery and mortar attacks.

Revolutionary Left Current: “We Have Remained Tenacious and Held On to the Revolution”

The Revolutionary Left Current has issued a statement marking the third anniversary of the Syrian uprising:

Radical left activists were not absent from the revolution in Syria since the time it erupted, many of them were actually the initiators of it, as new groups or as cadres who left the official communist parties, whose leaders showed their submission to the bloody bourgeois regime. But unfortunately, many of them faded away because of the repression, exile or his or her distaste for arm struggle.

But we, the revolutionary left current, remained tenacious and held on to the revolution. With our modest capacities, we participate in all forms of mass struggle, including armed struggle as individuals. But the time has come, at that particular moment of the revolution, for the revolutionary left current to play its role in the popular armed struggle through the establishment of the People’s liberation faction without giving up for a single moment all forms of peaceful mass struggle that allow us to confront both the violent fascist regime and the reactionary counter-revolutionary forces. This is the road for the victory of the popular revolution, in rooting its nature in democracy and socialism from below, in defending the immediate and general interests of the popular classes, in securing the independence of the will of the people from any imperialist or regional intervention from any foreign power, and in recovering our occupied territories of the Golan by all means possible.

The People’s Assembly has approved the bill for this spring’s Presidential election.

Nominally, other parties and individuals can challenge President Assad; however, many possible opponents will be excluded by a provision requiring continuous residence in Syria for at least the past 10 years.

The Syrian opposition has rejected the elections, insisting that Assad step down for a transitional go