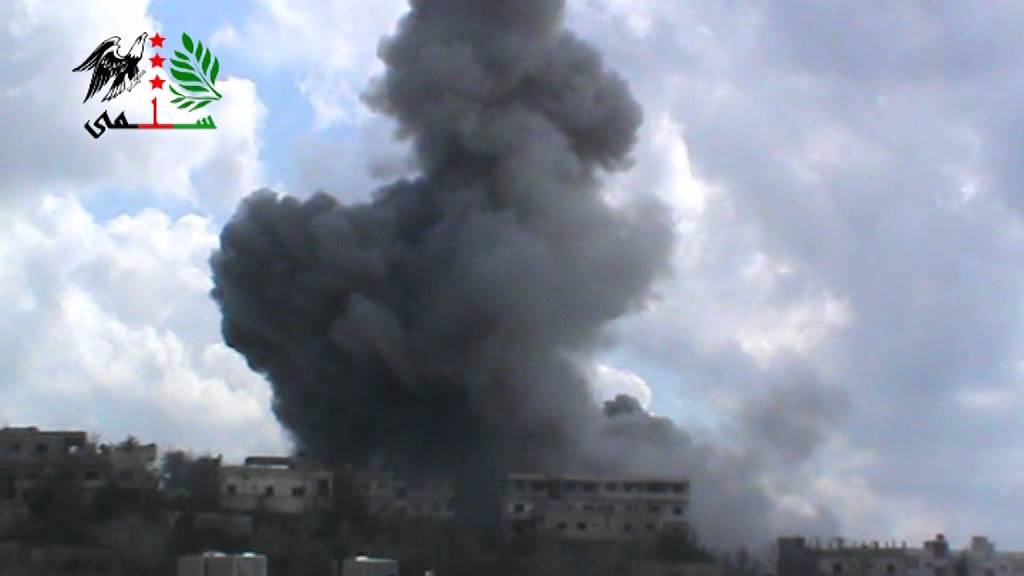 UPDATE 2030 GMT: A pro-regime Facebook page has posted the names of 58 Syrian troops and militia killed in the fighting for the village of Kassab.

Footage of the remains of a convoy trying to bring regime reinforcements:

An insurgent in the village:

The Syrian army tried on Wednesday to halt the advance of insurgents in Latakia Province in western Syria, shelling positions and bombing the opposition-held town of Salma.

Syrian forces tried to check the advance from the village of Al-Bassit, 15 kilometers (nine miles) west of Kasab. A Syrian officer said they were “relentlessly bombarding Kasab to stop the rebels from digging in.

Activists confirmed the shelling and airstrikes.

A barrel bombing of Salma:

The Syrian officer maintained that hundreds of insurgents had been killed as they took Kassab. He said 50 of his soldiers died.

Insurgents have lifted a self-imposed media blackout on their offensive near Quneitra, close to the demilitarized zone with Israel and the Golan Heights.

The insurgents claim they have killed about 500 Syrian troops and Hezbollah fighters and seized five tanks, other armored vehicles, and anti-aircraft guns.

The fighters say they have cleared barriers, opening the road between Quneitra and Daraa, and attacked regime barracks.

The Syrian Foreign Ministry has sent letters to the United Nations Secretary-General and the Chairman of the UN Security Council, calling for condemnation of Turkish involvement in the insurgency’s Latakia offensive.

The Ministry accused Ankara of collusion in “organizing, receiving, funding, and hosting tens of thousands of terrorists from various takfiri movements and facilitating their entry into the Syrian territories and giving them background bases on the Turkish territories”.

While restricting news of the insurgents’ advances, Syrian State media has repeatedly denounced Turkish support of “terrorists” since the launch of the offensive last Friday.