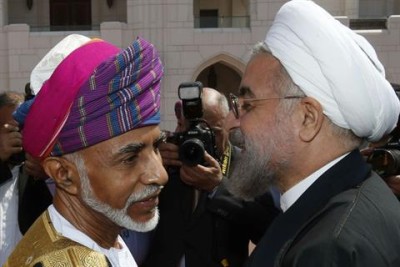 President Rouhani pursues his engagement policy with Gulf States on Wednesday with a visit to Oman.

The Iranian Ambassador in Muscat has said that resolution of the Syrian crisis will be among the discussions between the two sides.

Rouhani’s trip comes days after a public split among the Gulf States. Saudi Arabia, the United Arab Emirates, and Bahrain withdrew their Ambassadors from Qatar over Doha’s support for the Muslim Brotherhood in Syria and Egypt. Oman has tried to maintain a position of neutrality in the dispute.

Yet the economic aspects of the trip may be the priority for Tehran and Muscat. Iranian sources say the Islamic Republic is planning to invest $4 billion in Oman’s Duqm port on the Arabian Sea, in projects that include the establishment of 100 large oil and gas tanks and an iron-smelting plant. The Iranian ambassador, Ali Akbar Sibeveih, has talked about a further $2 billion investments in the ports of Sohar and Salalah.

Sibeveih added that Iran plans to establish a 400-bed hospital equipped with the latest medical facilities and that Oman and the Islamic Republic intend to build a causeway linking the two countries over the Strait of Hormuz.

However, Ahmed Al-Futaisi, Oman’s Transport & Communications Minister, said he had no knowledge of the causeway project.

In 2009, Oman and Iran agreed to construct a 200-kilometer (125-mile) undersea gas pipeline linking the two countries. The project is expected to be among the discussions in the two-day visit.