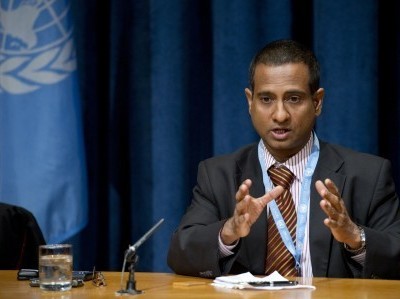 The report is based on interviews with more than 130 people and written reports from human rights organizations. The testimony inside Iran was collected by telephone, as Iranian authorities have always refused to let Shaheed, appointed in 2011, into the country.

1. A number of positive overtures have been made by the new Government of the Islamic Republic of Iran, apparently aimed at advancing President Hassan Rouhani’s campaign pledges to strengthen human rights protections for civil, political, social, cultural and economic rights, and at remedying some cases of human rights violations. This includes the proposal of a new charter for citizens’ rights. Since September 2013, the Government of the Islamic Republic of Iran has released 80 individuals, some of whom appear to have been prosecuted for peacefully exercising their fundamental rights to expression, belief, association or assembly. Some detainees were furloughed for a few days; others appear to have been permanently released, while hundreds of others remain in some form of confinement, including several individuals whose detention was identified as arbitrary by the Working Group on Arbitrary Detention (see annex I).

2. The Special Rapporteur, while welcoming the above-mentioned positive steps, stresses that they currently do not address fully the fundamental human rights concerns raised by the General Assembly, the Human Rights Council and its special procedures, the treaty bodies, human rights defenders and international organizations. This includes the need to address laws and practices that infringe upon the rights to life, to the freedoms of expression, association, assembly, belief and religion, to education and to nondiscrimination.

3. The Special Rapporteur emphasizes that the basis of these concerns is primarily the non-compliance of national laws with the State’s international obligations and a lack of adherence to the rule of law, as well as a failure to investigate complaints and to bring human rights violators to justice. Furthermore, the Special Rapporteur believes that the recent engagement with the international community presents opportunities for future cooperation, particularly with regard to capacity-building to advance the State’s international human rights obligations.

4. Reports of the arbitrary detention of individuals for peacefully exercising their fundamental rights to expression, association, assembly, belief and religion remain prevalent. Interpreting article 9 of the International Covenant on Civil and Political Rights, the Human Rights Committee recognized, in a draft general comment on liberty and security of person, that “liberty of the person is a right of profound importance, both for its own sake and because deprivation of liberty has historically been a principal means by which other human rights are suppressed.

5. Information in the above-mentioned reports also reveal that aspects of Iranian laws, policies, attitudes and practices extensively identified by the United Nations human rights machinery regretfully continue without redress and persist in undermining the independence of the State’s judicial organs, and in nullifying safeguards for fair trials. This is all the more alarming when considering the frequent use of the death penalty, in particular for crimes not considered the “most serious offences” under international law.

6. The present report, far from being exhaustive, analyses the prospects for reform of the administration of justice, in particular with regard to progress made in implementing the recommendations made by the Working Group on Arbitrary Detention in 2003,3 during the universal periodic review in 20104 and by the Human Rights Committee in 2011.

7. The Government of the Islamic Republic of Iran forwarded a detailed reply to all sections of the present report,6 in which it revealed its ongoing dissatisfaction with credible sources of information, contending that the report violated article 6 of the Code of Conduct for Special Procedures Mandate Holders, which directs them to pursue due diligence in gathering and corroborating information emanating from credible sources. The Government asserted that the present report selectively considered comments made by other United Nations human rights mechanisms, and questioned whether visiting a few European countries to collect information on the situation of human rights in the Islamic Republic of Iran was “the correct methodology for the compilation of a report”.

8. In this regard, the Special Rapporteur continues to maintain that he only presents corroborated information, gathered from credible sources, that he has sought clarification on a number of issues and cases through communications with the Government – a majority of which remain unanswered – and that he has accurately presented concerns raised by other human rights mechanisms. He also concurs that the alternatives pursued in the absence of an approved visit to the country are less than ideal.

9. In its comments, the Government also asserted that individuals that are guilty of serious crimes – including alleged acts of violence, the disruption of public order and the promotion of ideas with the intent of inciting “secessionist” activities – were inappropriately identified as human rights defenders in the report. It also maintained that journalists and lawyers are not immune from prosecution when they violate “the boundaries of a duty entrusted to him/her by law and engages in acts that run contrary to his/her standing”. Lastly, the Government continued to maintain that drug trafficking is a serious crime that warrants capital punishment.

93. The Special Rapporteur recalls his view that the Islamic Republic of Iran possesses the basic tools necessary to observe its international human rights obligations. They include the International Covenant on Civil and Political Rights, the International Covenant on Economic, Social and Cultural Rights and various aspects of a number of national laws. He affirms that human rights could be better secured if
the principles and regulations stipulated by these laws were consistently implemented.

94. The Special Rapporteur also stresses that, despite recent welcome amendments to the Penal Code and the Criminal Procedure, and the proposal for a new charter of citizens’ rights, these documents do not appear to resolve fully the issues previously raised by United Nations human rights mechanisms and recommendations made during the universal periodic review of the Islamic Republic of Iran in 2010. Certain
national laws continue to undermine and/or contravene rights guaranteed by these legal instruments through extensive restrictions and discriminatory practices.

95. Reports received by the Special Rapporteur continue to detail cases of frequent infringement of the rule of law established by national laws and international standards, resulting in the arbitrary detention of hundreds of individuals peacefully exercising rights guaranteed by the above-mentioned treaties. The violation of the rights and guidelines enshrined in the Constitution, the Law on Respecting Legitimate Freedoms and Protecting Citizens’ Rights and the Criminal Procedure has also apparently resulted in the psychological and physical torture of persons for the purposes of extorting information that is reportedly used as evidence in court, the basis for convictions and the application of lengthy or capital sentences.

96. Most of the said violations are reportedly committed during pretrial detention or court sessions. The Special Rapporteur therefore urges the Government of the Islamic Republic of Iran to consider the following recommendations:

(a) To facilitate the unconditional release of individuals imprisoned for exercising peacefully their rights to expression, association, assembly, belief and religion;

(b) To strengthen fair trial safeguards by ensuring access to legal counsel during all phases of pretrial detention and the investigative stage of cases, including during interrogation and arraignment, and allow for legal counsel to advise the accused during these proceedings;

(c) To improve access of legal counsel to all files containing evidence against the accused;

(d) To investigate all allegations of mistreatment and/or psychological and physical torture, and to prosecute the parties responsible;

(e) To prevent the intimidation of lawyers, including threats of detention and prosecution for discharging their ethical and professional responsibilities, including when submitting client grievances and addressing international and national media on their client’s behalf, which should be possible without fear of prosecution under national security and defamation laws;

(f) To prohibit capital punishment for juveniles and for crimes that do not meet the most serious crimes standards under international law, including for drug offences and perceived sexual offences.