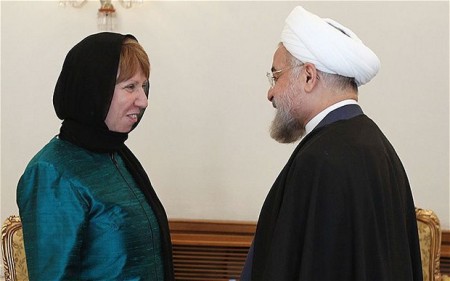 Pressing their challenge to the Rouhani Government, hardliners — and members of the Supreme Leader’s inner circles — stepped up attacks on the UN and Europe on Thursday.

Leading MP Gholam Ali Haddad Adel, the father-in-law of the Supreme Leader’s son Mojtaba, told the Foreign Ministry that it must not “remain indifferent” to the “meddling” statements of United Nations Secretary General Ban Ki-moon and to the “behavior” of the European Union’s foreign policy head Catherine Ashton.

Ban upset regime officials with this week’s statement to the UN Human Rights Council criticizing Tehran’s record, for example, its recent escalation of executions. Ashton’s visit to Tehran last weekend to prepare for forthcoming nuclear talks has been overtaken by her meeting with women’s rights activists at the Austrian Embassy.

Haddad Adel said, “Our country’s internal matters do not need the Westerners’ opinion and we best know our expediency.”

The Supreme Leader’s advisor did not turn his attack on Ban and Ashton into criticism of the Rouhani Government, but Ayatollah Khamenei’s representative to the Basij militia, Mohammad Reza Toyserkani, did: he said the Intelligence Minister must “answer to public opinion and valued forces regarding the meeting of Catherine Ashton and elements of the sedition”.

And Deputy Speaker of Parliament Mohammad Reza Bahonar said: “If the gentlemen are incapable and cannot protect the system’s strategic policies, then we must think of something else.”

Esmail Kowsari, a leading member of Parliament’s National Security Committee, said Ban was a puppet of “America, England, and the Zionists”. He then warned that the Government’s lack of a “firm” response would imply that “Rouhani has had discussions with the Americans about these (matters) prior to the (2013) presidential elections”.

Some MPs summoned Foreign Minister Mohammad Javad Zarif over the meetings of Ashton and other European officials with human rights activists, “Are such meetings…part of the Geneva Accord’s (the interim nuclear deal in November) unwritten contents?”

The criticisms of the Government came even as the Foreign Ministry denounced Ban’s presentation to the UN on human rights.

Spokeswoman Marzieh Afkham said, “Ban Ki-moon’s report…is all null and void with no legal proof. (It is) influenced by political views over human rights.”

Ahmed Shaheed, the UN Special Rapporteur on Human Rights in Iran, released his third report to the UN Human Rights Council on Thursday.

Shaheed said that, although Iran had made positive overtures in recent months under the Rouhani Government, the UN’s concerns have not been fully addressed.

These concerns include “the non-compliance of national laws with the Government’s international obligations, a lack of adherence to rule of law, as well as failure to investigate complaints and to bring human rights violators to justice”.

The report is based on interviews with more than 130 people and written reports from human rights organizations. The testimony inside Iran was collected by telephone, as Iranian authorities have always refused to let Shaheed, appointed in 2011, into the country.

Shaheed noted the continuing rise in executions and expressed concern about the independence of the judiciary, saying that judges of the Revolutionary Courts are connected with security and intelligence organizations. He reported threats, intimidation, detention, and prosecution of Iranian lawyers, such as the detained Mohammad Olyaeifard.

No details were given of the discussion for “ways for expanding relations between the two countries in all fields”.

However, Iranian State media generally refers to the ongoing nuclear talks, with Rouhani praising Russia’s “positive role” and saying, “The two sides (Iran and the 5+1 Powers) are at an important stage for reaching final negotiations.”

High-level negotiations on a comprehensive nuclear deal resume next week in Vienna.

Culture and Islamic Guidance Minister Ali Jannati said on Thursday, “The duty of the Guidance Ministry is alleviating the Supreme Leader’s cultural concerns in all arenas….(He) has always warned about the cultural invasion of the West.”

Last week, Ayatollah Khamenei told the Assembly of Experts that he shared the concerns of some of its members about “cultural openness”.

Jannati has said that the Government is seeking to free access to the Internet, including Facebook and other social media sites; however, President Rouhani assured the Supreme Leader in early January that — in return for support of the Government’s approach to nuclear discussions — he would not press social and cultural initiatives.

Meeting Between MPs and Intelligence Minister Collapses Into “Insulting” Statements

A meeting on Wednesday between several MPs and Intelligence Minister Mahmoud Alavi — considering the meeting of the European Union’s Catherine Ashton with women’s rights activists — reportedly collapsed into “insulting” and “unprecedented” statements.

MP Mehdi Kouchakzadeh, a leading critic of the Government and supporter of former President Mahmoud Ahmadinejad, supposedly made the statement when Alavi refused to disclose the identity of his “23-year-old spiritual son” who accompanied him to Parliament.

By God, there has been a coup d’etat in this country or else the President would not announce that the Treasury is empty. The Foreign Minister would not say that an (American) bomb disables everything….Hashemi Rafsanjani says that (the Ahmadinejad administration) is illegal. I must tell Hashemi that he and his entire people are illegal.

By the Qur’an there has been a coup and the Revolution is in danger.