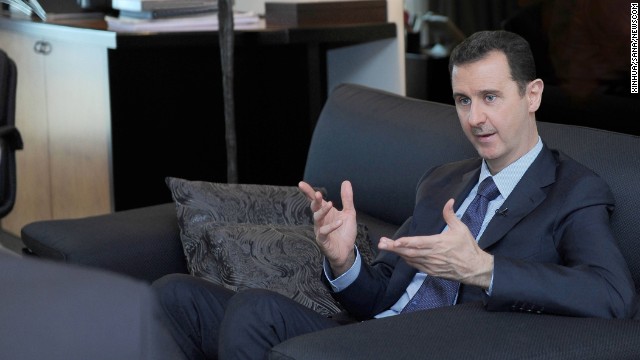 The Assad regime may be facing criticism for handing over only 4% of its chemical weapons stocks — rather than the 90% which should have been shipped out of Syria by January 31 — but for the regime’s media, all is well.

Officials with the Organization for the Prohibition of Chemical Weapons said that only about 50 tons of Damascus’ stocks of more than 1300 tons have been moved to the port of Lattakia. The initial deadline to 700 tons of stocks was December 31, while another 500 should have been delivered to international authorities by January 31.

US Secretary of State John Kerry has been among those expressing concern, while Syria’s ally Russia said it has received assurances that the stocks can be shipped out of the country by March 31.

All this has passed by Syria’s State news agency SANA, which declares on Thursday:

The Foreign and Expatriates Ministry on Wednesday signed with the United Nations and the Organization for the Prohibition of Chemical Weapons (OPCW) an agreement regarding the legal center of the joint mission for the disposal of Syria’s chemical weapons.

The Ministry also signed with the UN and the OPCW a memo of understanding on securing medical services and medical evacuation services to the joint mission in cases of emergency.

In statements to journalists following the signing, Deputy Foreign and Expatriates Minister Dr. Fayssal Mikdad stressed that Syria is moving forward with determination, strength and credibility towards full implementation of the agreements signed with the UN and the OPCW, and that these agreements are part of the responsible actions taken by Syria since it voluntarily joined the Chemical Weapons Prohibition Treaty.

Mikdad said that the standing cooperation between Syria and the OPCW is exemplary, and that it’s moving towards fulfilling all obligations in cooperation with the UN, lauding the efforts exerted by UN and OPCW representatives and Foreign Ministry staff to sign these two agreements.

The only note of caution in the report referred to the regime’s claim that the delay in shipments is because of security issues along the route to Lattakia. Mikdad said, “Difficulties facing Syria, particularly in the framework of the country’s war on terrorism, could hinder the implementation of some commitments from time to time.”