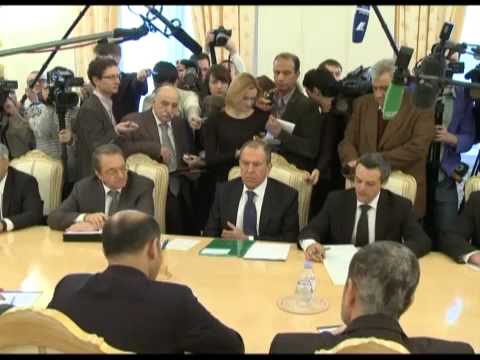 Russian Foreign Minister Sergei Lavrov on Tuesday expressed support for the Syrian National Coalition’s decision to attend the second round of the Geneva II peace talks, saying that the move showed the Coalition supported a political, rather than a military, resolution to the conflict.

Lavrov’s remarks, made at a meeting in Moscow with the leader of the National Coalition, Ahmad Jarba, came as Jarba said that a delegation from the Syrian opposition will attend the 2nd round of negotiations in Geneva, to implement the Geneva communique.

Meanwhile, Lavrov said that Moscow “valued the opportunity of dialogue” and was “interested in maintaining regular contact with the leadership of the National Coalition”.

Lavrov’s approach is a continuation of Moscow’s strategy of emphasizing the primacy of a political solution to the crisis — one that leaves room for the Assad regime to play a role in Syria’s future — and of pushing the line that the military conflict is dominated by predominantly foreign “terrorist groups” who have no role in the Geneva II process.

The meeting with Jarba is a major boost to this strategy, allowing Moscow to co-opt the Syrian Coalition as another party to its Geneva II process — emphasizing that Russia is interested in bringing all parties to the table, while sidelining other opposition groups fighting on the ground as “terrorists”.

Video: Lavrov’s opening comments to Jarba (in Russian, translation below):

We value the opportunity of our dialogue, we are interested in maintaining regular contact with the leadership of the National Coalition forces.

On January 12 in Paris, we fully and frankly discussed topical matters in preparation for inter-Syrian dialogue. I believe that today’s conversation will be very useful in clarifying approaches for the further promotion of the Geneva process.

We consider the fact that the NC delegation came to Montreux to participate in the launch of an international conference on Syria and then participated in the first round of Geneva II as opting for a peaceful settlement of the bloody conflict.

We know that it was not easy, that there are still many people who relied on and continue to rely on the rejection of any dialogue in favor of a military scenario.

The step taken is all the more important. We support the approach which allowed for inter-Syrian negotiations.

Throughout the three years of crisis in Syria, Russia has worked and continues to work with all parties of the Syrian side, without exception. We believe that this the only way to provide a truly comprehensive approach to understanding the positions of the parties and to ensure that Syrian dialogue is comprehensive, reflecting the whole spectrum of Syrian society, as envisaged in the Geneva communique of June 30, 2012 and UN Security Council resolution 2118.

We encourage our American and European partners and countries in the region to take this approach, as they in our opinion should also work with all parties, without exception, in the Syrian conflict. I mean, of course, political parties, and not terrorist groups. All this we will discuss in detail.