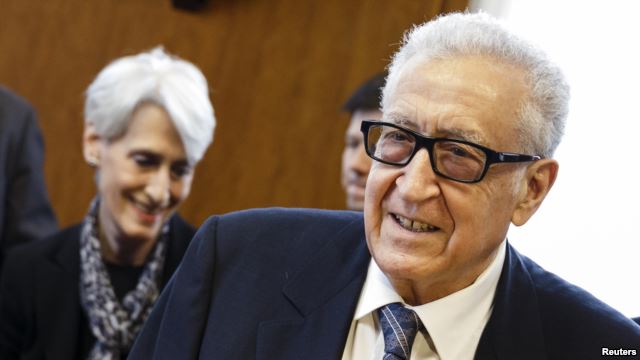 UPDATE 2000 GMT: Both sides have announced failure to advance in the second round of Geneva II talks after United Nations envoy Lakhdar Brahimi met separately with the Assad and opposition delegations.

“Unfortunately we have reached a dead end,” said opposition spokesman Louay Safi, blaming regime “belligerence” for the stalemate. “I hope we can still find an opening in that wall.”

Safi said it was too early to say whether there would be a third round of talks.

Declaring “deep regret”, Deputy Foreign Minister Feisal Mikdad said, “We came to Geneva to implement Syria’s declared position to reach a political solution to the crisis. … Unfortunately the other side came with another agenda, an unrealistic agenda.”

UPDATE 1350 GMT: Deputy Foreign Minister Feisal Mikdad has declared “no progress” in discussions and lashed out at the United Nations over its call for unrestricted aid into Syrian towns and cities:

#Syrian Deputy Foreign Minister says "we have done our best" on humanitarian access, some statements by #UN's Amos "absolutely unacceptable"

Mekdad: We met @ValerieAmos 3 times in Damascus and we agreed comprehensive plan. some of her statements absolutely unacceptable

United Nations envoy Lakhdar Brahimi has turned to Russia and the US in an attempt to continue the Geneva II conference on Syria.

Brahimi turned to top Russian Deputy Foreign Minister Gennady Gatilov and US Undersecretary of State Wendy Sherman on Thursday, after four days of discussions with the regime and opposition delegations failed to find any common ground, even on an agenda for talks.

Brahami said the Russian and American diplomats “promised that they will help both here and in their capitals, to unblock the situation for us”.

The UN mediator admitted, “Until now, we are not making much progress in the process….Failure is always staring at us in the face.”

However, he maintained, “We will certainly not leave one stone unturned if there is a possibility to move forward,” and tried to find hope in the claim that the delegations “are a little bit more familiar with the presence of the other side”.

Brahimi’s challenge was highlighted in New York, where the issue of humanitarian aid — which the UN envoy has tried to use as a confidence-building measure in the Geneva talks — descended into a political fight between Russia and other countries, including the US.

Moscow tried to counter a draft resolution for the UN Security Council with its own text on aid reflecting the priorities of Damascus.

Russia said earlier this week confirmed it would reject the Western-Arab draft resolution, asserting it was biased against the Assad regime.

Steps are being taken, some of them publicly, such as declarations that the use of force remains a possible option, steps are being taken to politicize all humanitarian issues at the UN Security Council; probably, they wish to force the government to slam the door shut (on negotiations)….

We have been witnessing systemic attempts to find any pretext for thwarting a political settlement. Certainly, we grow alarmed whenever the presidents of the United States and France once again say at a joint press conferences that the affair may go beyond negotiations.

#Lavrov: It is essential to abide by the prior commitments. We have made good on ours and fully expect our partners to do likewise

Appearing with Hollande on Tuesday, Obama expressed “enormous frustration” with the Syrian situation and said, “We are continuing to explore every possible avenue to solve this problem,” although he ruled out direct US military intervention.

Lavrov backed the position of the regime delegation at the Geneva II conference that “terrorism” must be discussed before any consideration of an interim governing authority and the departure of President Assad:

It is being said today that any further talks are pointless because the [Syrian] government does not want to agree on the composition of a transitional ruling body. We are going in circles. I have already explained why such an approach can hardly be called logical and constructive.