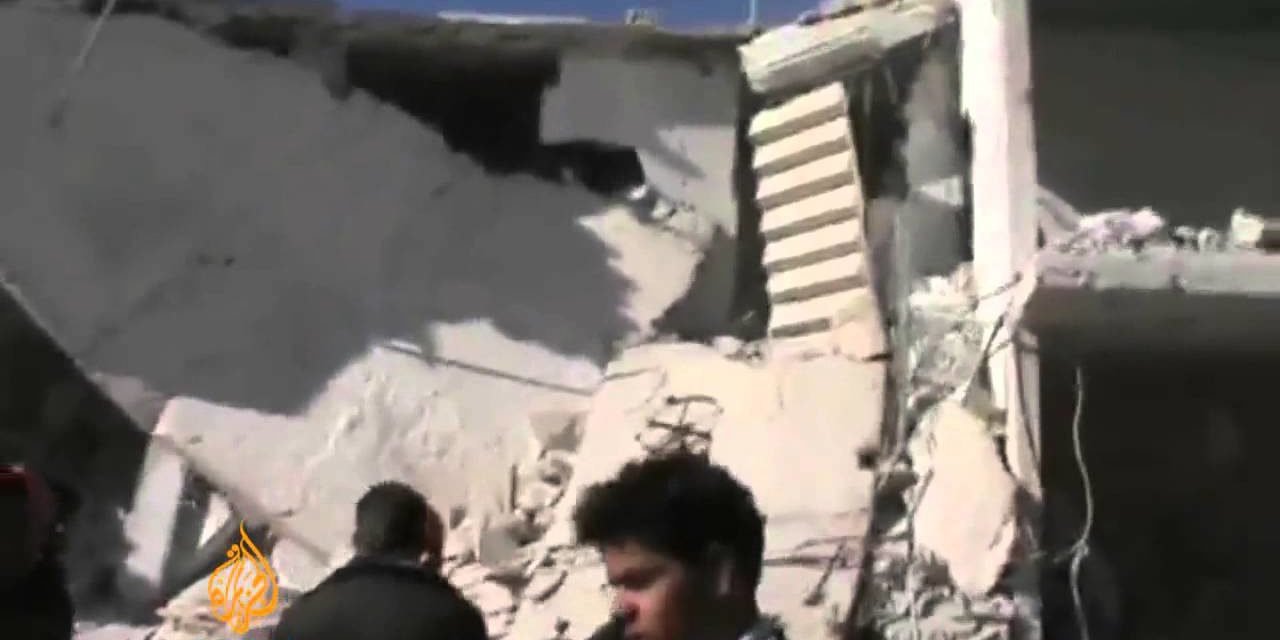 Video: How to Tease Assad’s Snipers

A day after the adjournment of the Geneva II conference, the Assad regime pushed aside further talks in favor of bombing of areas such as Aleppo.

The opposition has agreed to United Nations envoy Lakhdar Brahimi’s suggestion of February 10 for the resumption of talks, but Foreign Minister Walid al-Moallem, the leader of the Assad delegation at Geneva, told State media that he would have to consult Damascus.

Al-Moallem condemned the opposition for its “non-seriousness”, saying it had insisted on President Assad’s departure rather than dealing with the issue of terrorism: “If they do not abandon their illusions, they will get a rude shock because we are a country of institutions and a constitution and we have a President of the Republic.”

Syria’s Ambassador to the UN, Bashar al-Jaafari added, “The Syrian official delegation discovered during the talks that it was facing an opposition of political debauchery which acted as was asked of it, not a national opposition with a political program serving the Syrian people.”

Meanwhile, the Syrian military continued its bombing campaign throughout the country.

On Saturday, the focus shifted from the south and the Damascus suburb of Darayya, where more than 70 bombs have been dropped since Wednesday, to Aleppo.

At least 23 people were killed in Syria’s largest city. Among the dead were eight members of a family trapped in a burning car in the al-Bab section, after a fuel tanker exploded from the impact of the bombs.

Activists said three people were killed near a mosque and another seven in the Ansari neighborhood.

The Local Coordination Committees said that, of 165 deaths on Saturday, 115 were in Aleppo Province.

Among the casualties were 23 children and 19 women.

Aftermath of bombing in the Damascus suburb of Darayya:

Regime helicopter drops a barrel bomb near Quneitra, where insurgents have been advancing, close to the demilitarized zone with Israel in southern Syria:

A cameraman follows the flight and roar of two barrel bombs to the ground in Darayya:

Claimed footage of destruction of a building in Mleiha near Damascus by insurgents, killing about 80 pro-Assad militiamen:

Map With More Details Of Fighting Between ISIS, Insurgents Near Aleppo 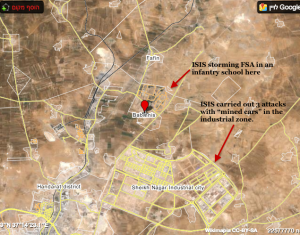 The same user also uploaded this new image of ISIS military Amir Umar Shishani, and a quote, attributed to him:

“People ask me, why have you started to establish Sharia Law so early? I prefer to live under Sharia for one day rather than spend my whole life dreaming about it.” 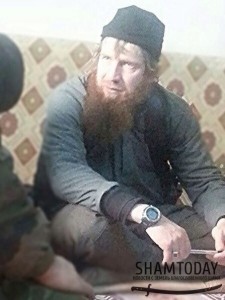 The insurgent Liwa al-Tawhid Brigade has said on Twitter that its commander, Adnan Bakour, was killed by an Islamic State of Iraq car bomb on Saturday.

ISIS, which has been fighting insurgents across northern and eastern Syria for a month, set out two bombs near Liwa al-Tawhid’s base near Aleppo.

Claims are circulating that ISIS has also killed two other commanders: Abu Hussein al-Dik, a leader of the faction Suqour as-Sham, and a senior officer of the Syrian Revolutionary Front in Idlib Province.