Syria: “This Will Be Decided on Battlefield, Not at Geneva II” — Scott Lucas with Voice of Russia 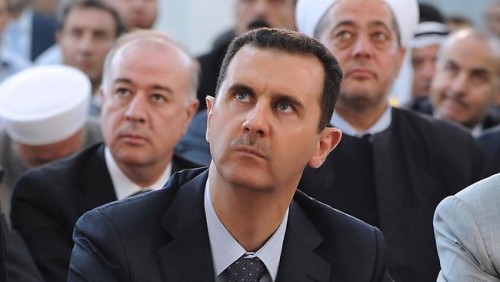 EA’s Scott Lucas spoke with Voice of Russia on Monday morning about the state of the Geneva II negotiations, and the possibilities — or lack of them — in the talks:

Listen to podcast on Voice of Russia site

We have had a very limited and tentative outcome with the arrangement to evacuate women and children from besieged areas in Homs, Syria’s third largest city.

Beyond that there may be an attempt today to get aid to other civilians in that city. But of course it is just one city. What we look at beyond that is whether there will be an agreement to get humanitarian aid into a number of areas across Syria, including besieged Damascus suburbs, areas in Aleppo that have been cut off.

And, as the opposition insists on the departure of President Assad:

We won’t see substantial political progress. The most that the Assad delegation will agree to is this commitment to have elections next year.

The insurgency fighting on the ground in Syria will not accept that. We might get an agreement between the two sides for ceasefire in some areas, say possibly Aleppo. But even that is going to be very shaky.

Remember the Geneva 1 communique, which occurred in June 2012. The agreement at that point was to have a ceasefire, which would be observed by the UN. It was to have delivery of humanitarian assistance, the release of detainees. And none of those conditions came about. In fact very quickly the UN observers effectively had to hide in their hotels and leave the country because there was no way they could carry out their mission.

Frankly, Syria is going to be decided on the battlefield. Until then you are not going to get a political resolution.