Syria Daily, Jan 19: (Some of) The Opposition Agree to Go to Geneva II Conference 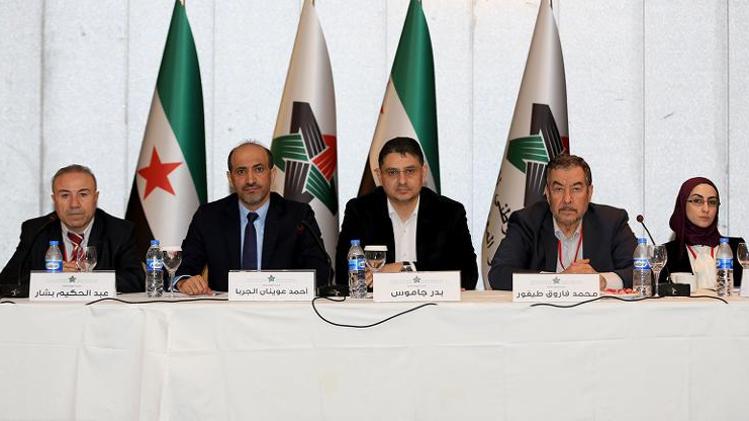 By a 54-18 vote, the opposition Syrian National Coalition agreed on Saturday to attend this week’s international “peace” conference in Switzerland.

However, the outcome also revealed the deep division within the Coalition over the issue. Forty-four members had withdrawn from the organization in protest, meaning that less than half of the 120-person Coalition supported the decision for participation.

The US and Britain had pressed the Coalition for a Yes, reportedly threatening to withdraw their backing if this did not occur. Claims circulated on Saturday that Turkey had warned it would close its borders, cutting off supplies to the insurgency, if the conference was rejected.

Ahmad Jarba, the head of the Coalition, maintained that the opposition would maintain its line — including the demand that President Assad step down — with “guns” as well as an “olive branch”: “We are supported and relying on people who are facing many atrocities that are unprecedented in history.”

US Secretary of State John Kerry declared, “This is a courageous vote in the interests of all the Syrian people who have suffered so horribly under the brutality of the [Bashar] Assad regime and a civil war without end….(It is) a path that will ultimately lead to a better future for all Syrians.”

The opposition’s Supreme Military Council endorsed the decision. There was no immediate reaction far from insurgent groups inside Syria, but Coalition spokesman Louay Safi claimed groups such as the Syrian Revolutionaries Front and Jaish al-Mujahideen wanted “to have some representation within the delegation” at the talks.

Jaish al-Mujahideen later issued a statement denying it had endorsed the decision.

And a leading member of the insurgent bloc Islamic Front, Abu Omar, said via Twitter that Syria’s future will be “formulated here on the ground of heroism, and signed with blood on the front lines, not in hollow conferences attended by those who don’t even represent themselves”.

The leading domestic opposition group, the National Coordinating Body for Democratic Change, said last week that it would not go to Switzerland, as attendance would be “suicide”.

Dozens of critically ill residents of besieged Yarmouk, in southern Damascus, were evacuated on Sunday.

“The evacuation has begun of a number of critical humanitarian cases from the Yarmuk camp,” said Palestine Liberation Organisation official Anwar Abdul Hadi.

He said 50 people had left the camp so far, and “it is expected that by the end of the day around 100” people will have been evacuated. The evacuations will continue daily until 600 residents in a critical condition, along with those suffering chronic illnesses and children and pregnant women, have left.

Yarmouk, home to a mainly-Palestinian population, has been cut off by regime forces. Aid officials say more than 50 residents have died from starvation and a lack of medical care.

However, Saturday’s shipment included only 200 food parcels, feeding just 330 of the camp’s 18,000 residents for a month.

It is not clear how much aid was delivered on Sunday.

In this claimed audio message, Islamic State of Iraq and as-Sham leader Abu Bakr al-Baghdadi calls for reconciliation with the insurgent with whom ISIS has been fighting for more than two weeks — he said the clear objective was to re-focus minds on the “greater enemy”, followers of Shia Islam:

Although Al-Baghdadi blamed insurgents for the recent clashes, he refrained from calling them by the derogatory term “sahwa”, instead referring to them as “fighting groups”.

Assad: I Will Not Give Up Power

President Assad has said the issue of his departure is not up for discussion at Wednesday’s “peace” conference in Switzerland.

“If we wanted to surrender we would have surrendered from the start,” Assad told Russian MPs in Damascus.

The President said he was surprised at the refusal of domestic opposition groups to go to the talks in Montreux.

Syrian State media later said Assad’s quotes “are not accurate” and that he “did not conduct an interview” with Interfax.

The insurgents say they used an Osa surface-to-missile system in the attack.

On Thursday, Jaish al-Islam posted footage of a falling regime helicopter, also hit with an Osa.

131 Killed Across Syria on Saturday

The Local Coordination Committees claim that 131 people were killed across Syria on Saturday, including 69 in Aleppo Province and 28 in Damascus and its suburbs.

The Violations Documentation Center has recorded 84,918 deaths since the conflict began in March 2011. Of the dead, 62,631 were civilians.