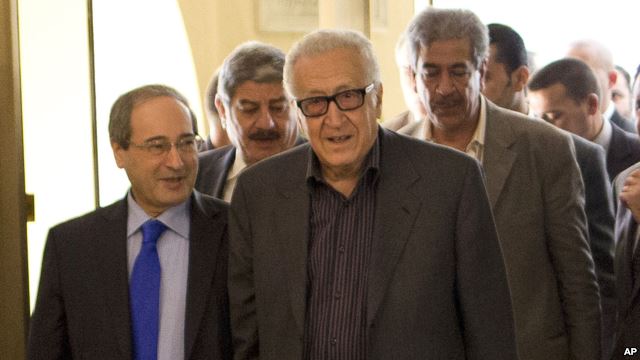 UPDATE 1645 GMT: United Nations envoy Lakhdar Brahimi has said, after the afternoon’s indirect talks between the Assad and opposition delegations, that “there are no miracles here”:

#Geneva2 Brahimi: it's easy for me to be patient. My hope is that the Syrian brethren on both sides will think of their people.

UPDATE 1515 GMT: An activist in Homs says more than half of the 500 women and children in the city refuse to be evacuated, fearing the fate of male relatives left behind.

Abu Zaid said even those who planning to leave have concerns:

Some 200 women and children, those suffering the worst as a result of the lack of food and medical supplies because of the army siege, are ready to be evacuated.

Those willing to leave would only do so if there are guarantees they won’t be detained by the regime.

Abu Zaid that, despite hopes at the Geneva II conference for an agreement allowing assistance to civilians, there is still no confirmation that any aid will be brought in: “The shelling is still non-stop. Many houses are on fire. People are still getting killed.”

In what may be the first outcome of the Geneva II talks on Syria, the Assad and opposition delegations have agreed on an evacuation of women and children from besieged areas of Homs.

The step was announced by United Nations envoy Lakhdar Brahimi at a press conference after Sunday’s talks.

The Assad delegation had said earlier that any deal over aid must cover all Syrian cities. However, Deputy Foreign Minister Feisal Mikdad said after Brahimi’s announcement:

“If the armed terrorists in Homs allow women and children to leave the Old City of Homs, we will allow them every access.

“Not only that, we will provide them with shelter, medicines and all that is needed. We are ready to allow any humanitarian aid to enter into the city through the …arrangements made with the UN.

The Free Syrian Army’s Homs Front Command called for a complete lifting of regime blockades on the city.

Brahimi’s attempt on Sunday for advance on the state of detainees and the abductees had more limited success. The opposition, asking for the release of 47,000 detainees, agreed to a regime request to provide a list of those held by armed rebel groups with whom it was in contact.

But Mikdad said authorities had examined the list of 47,000 and most had either never been held or were now free. He denied any juveniles are detained.

And Brahimi’s agenda for Monday of opening statements by both sides on their political objectives already looked to be in trouble. Mikdad said the Assad delegation would never accept the forced departure of the President, with elections as “the only solution” for the conflict.

The Islamic State of Iraq and as-Sham has rejected the “Umma Initiative” for reconciliation with insurgents.

ISIS called for a rejection of the Supreme Military Council and Syrian National Coalition as “projects opposed to the institution of Sharia law”. It then effectively condemned insurgent factions for working with foreign governments, asking for “the lawful manner” of dealing with them.

The Umma Initiative was launched by Saudi preacher Abdullah bin Mohammed al-Moheisini last Thursday in an attempt to end the four-week battle between ISIS and insurgents across northern and eastern Syria.

Video of Insurgents West of Aleppo

The Islamic Front’s Mohammad Alloush has posted on Facebook about the death of Haji Bakr, the second-in-command of the Islamic State of Iraq and as-Sham, in Syria

Reports indicate Haji Bakr was killed in Syria in early January by Liwa al-Tawhid, a leading group in the Islamic Front.

While expressing scepticism about regime motives for accepting an evacuation from Homs, Ahmad Jarba — leader of the opposition delegation in Geneva — has accused Syrian authorities of blocking assistance to besieged areas:

The #UN says aid convoys are ready – yesterday the regime says they can pass – so why are regime forces still blocking them? #Homs

Insurgents have issued a warning to the Lebanese armed forces, claiming it is firing into Syria in support of Hezbollah.

The insurgents say they have refrained from returning fire, but will not tolerate the situation if attacks continue.

The warning appears to be from the Islamic Front and Free Syrian Army, but Jabhat al-Nusra — whose Lebanese branch has already set off two car bombs in January — could attack not only Hezbollah but the Lebanese forces inside the country.

Suspicion Over Regime Motives for Evacuation of Homs

Ahmad Jarba, head of the Syrian National Coalition and the opposition delegation in Geneva, is wary of the Assad delegation’s motives in accepting an evacuation of women and children from Homs:

This is a well-known regime strategy (Daraya, Muadamia) to allowing women & children to leave, then massacring & imprisoning the men #Homs

And Jarba is not the only sceptic — Jon Wilks, the British Foreign Office’s liaison to the Syrian opposition, tweets:

Regime preconditions on letting women and children out of Homs (names of men divided into civilians and armed groups) looks sinister.

Regime has used this tactic in other beseiged areas and then attacks have followed or men who leave disappear.

MT @JonWilksFCO Let's keep it simple on #Homs. Regime should let the humanitarian convoy in. Then population should decide to stay or leave.

Activists: 30% of Population of Raqqa Leaves City After ISIS-Insurgent Fighting

Activists reports that more than 30% of the population of Raqqa, the largest city held by the opposition, has fled following clashes between insurgents and the Islamic State of Iraq and as-Sham.

ISIS regained a dominant position in the city earlier this month after the insurgents threatened to force its withdrawal. Many residents subsequently headed for Turkey, as ISIS blocked the road between Raqqa and Deir Ez Zor to the east.

ISIS has been accused of detentions, abductions, and killings in the city since it entered last year.

Turkish army forces allowed refugees to cross on foot through a small opening in a border fence. Refugees had to walk for almost 500 meters before reaching a populated area.

Novosti Shama writes that, according to its sources in Syria, Jaish al-Muhajireen wal Ansar (JMA) and Nuraddin az-Zinki began a joint operation on Sunday at 9:00 a.m. The ujahideen captured the town 12 hours later. The site said the enemy suffered heavy losses but the exact number is not known.

Novosti Shama notes that the leadership and most fighters of JMA are jihadis from the Caucasus Emirate — an insurgent group based in Chechnya, considered a terrorist organization by Russia — and the Crimean Tatar Jamaat. In addition, JMA also has fighters from Central Asia countries and Europe as well as Arabs .

The leader of JMA is Salahuddin Shishani, who took over from Umar Shishani in November after the latter swore allegiance to the leader of the Islamic State of Iraq and as-Sham.

US Resumes Delivery of Non-Lethal Aid to Insurgents

US officials say Washington has restarted deliveries of non-lethal aid to the Syrian insurgency.

Washington cut off the assistance after an armed group raided Free Syrian Army warehouses near the Turkish border in December.

The US said the newly-formed Islamic Front had carried out the raids, taking American-supplied equipment and supplies.

The Islamic Front, as well as the Supreme Military Council and the Syrian National Coalition, said they were asked by the Free Syrian Army to protect the warehouses from further attacks — possibly by another faction, the Syrian Revolutionary Front. The Front said a full inventory had been taken to document that it had not seized any stock.

The American officials said items taken in December had been returned, with steps to prevent future “diversions”.

The officials said communications equipments and other items for non-armed opposition groups would be sent through Turkey, with the coordination of the Supreme Military Council.