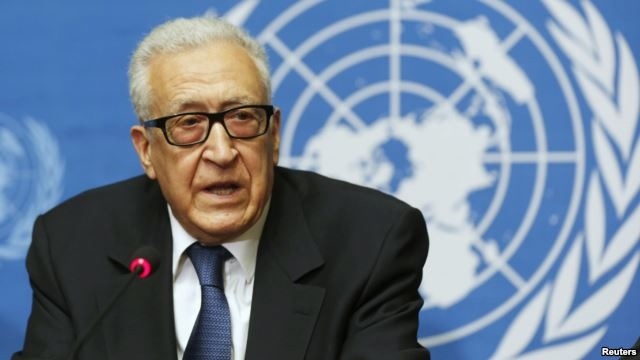 UPDATE 2030 GMT: Ahmed Jarba, the head of the Syrian National Coalition and the opposition delegation, has claimed diplomatic victory despite the lack of progress at the Geneva II conference:

The regime has always insisted that they were ready for negotiations, and that the SNC was not. That the SNC is a terrorist organization that does not want peace, as opposed to the regime – a proponent of peace. Our decision to attend was a strategic and courageous one. We were positive, and again, we do not regret our attendance because it enabled us to prove to the world that the regime does not recognize Geneva, or its clauses. Their lack of intent was exposed starting the very first day….

In the end, the regime has been forced to sit down, and sit with the Coalition, and hear the voice of the Syrian people. There has not been a lower point for the regime. We have justice on our side, and we came to Geneva to retrieve the Syrian people’s rights through the Transitional Government Committee, we hope the negotiations will reach this.

Jarba said that progress might be made in talks with Russia, but ruled out dialogue with Iran:

I think our relation with Russia must improve in a positive manner. Regarding Iran, that is a different issue, we consider Iran an invader of Syria, it supports Hezbollah’s terrorism and the extremist Iraqi radicals; it also has forces belonging to the Revolutionary Guard (in Syria).

Brahimi said “the gap between” the Assad and opposition delegations “is quite large”. He expressed hope that the next round of talks would be more productive.

The envoy said a date for the next round will be announced when the current discussions end on Friday.

The opposition had said that it saw progress, with the regime delegation agreeing to consideration of the political transition.

However, the Assad representatives said that they would only consider the Geneva I communique — which the opposition and its foreign supporters say requires the departure of the President — “paragraph by paragraph”.

State news agency SANA put out the regime delegation’s dismissal of a political transition in which President Assad leaves office:

The Syrian official delegation said that it pointed out to the coalition delegation the fact that the latter apparently hasn’t read any part of the Geneva communiqué except the 8th item (on the transition), stressing that there were other items before and after it, and that nothing can be started from the middle.

The Assad representatives maintained, as they have all week, that the priority of the talks must be “terrorism”. The Foreign Ministry reinforced the positions with letters to the UN “on the terrorist acts of the armed terrorist groups and the Saudi involvement in supporting these acts”.

There was little reference on Wednesday to humanitarian issues such as aid to besieged areas of Homs.

Brahimi had said last Saturday that agreement was close on providing the assistance, but a 12-truck convoy has been held up while the UN seeks approval from Damascus.