Syria Daily, Jan 11: The Fight Against Islamic State of Iraq in Aleppo Province 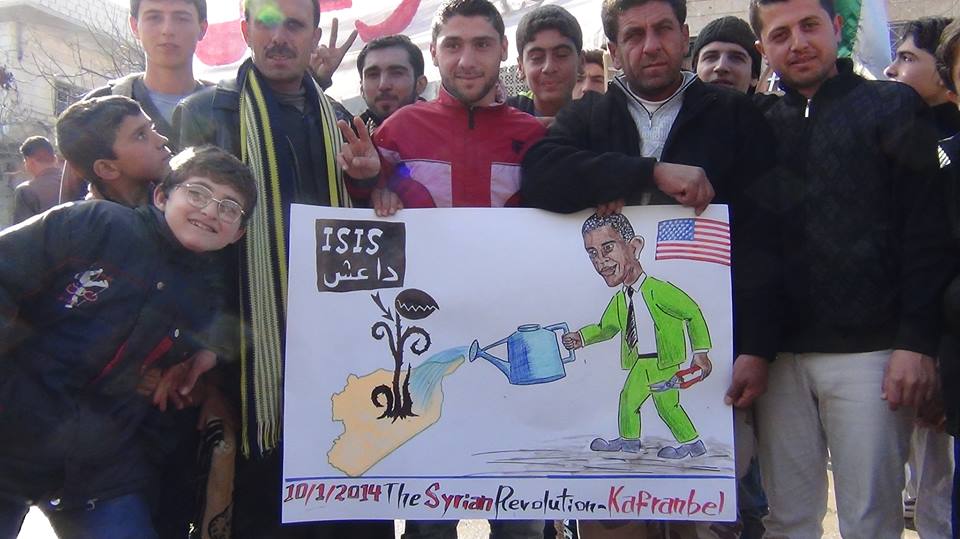 LATEST: Activists — Regime Troops Advance In and Near Aleppo

Unconfirmed reports claim that the Islamic State of Iraq and as-Sham, pushed out of most of its positions across northern Syria, is continuing to fight insurgents in Aleppo Province.

Clashes were reported in the town of al-Bab, northeast of Aleppo:

Rumors of ISIS resistance, including suicide bombs, in al-Bab have circulated for several days. Claims that the group has also hit back at insurgents, including in the city of Raqqa, are also unconfirmed, as is the declaration of almost 500 deaths since insurgents began pushing back ISIS eight days ago.

Activists: Regime Troops Advance In and Near Aleppo

The Aleppo Media Center has said that regime forces have taken advantage of the insurgent fight against the Islamic State of Iraq and as-Sham to advance in and near Aleppo.

THe Center said, “Regime forces have taken over the area of Naqarin and are advancing towards the industrial area of Aleppo city.”

The Dnevnik Shama (“Diary of Sham”) YouTube channel, which appears to be run by individuals close to Chechen and North Caucasian fighters in Syria, on Saturday published this video of ISIS Emir Abu Umar al-Shishani. The video claims to show Umar and his men around a campfire following the “actions in al-Bab”.

Several other videos show ISIS insurgents from the North Caucasus. This video shows an ISIS fighter named as Abu Khafs Shishani, who according to other reports is in Aleppo province:

This video, apparently shot on a cellphone, shows a young Russian-speaking jihadi named as “Brother Yusuf”. He is asked to say a few words about his feelings regarding events, for the benefit of those back home in the North Caucasus and Russia. Yusuf says, “Here there is jihad, and there, too, there is jihad… Here we are fighting the infidels, and there are infidels there…”. Later, he adds, “The Olympics should burn”, a reference to the 2014 Winter Olympics in Sochi, Russia.

The owner of the Dnevnik Shama YouTube account, who also runs an account on Russian social networking site VK, posted on that account claimed images of at least six men allegedly taken captive by the North Caucasian ISIS fighters. The caption accompanying the images said the men were from “Jaish Khur”, meaning the Free Syrian Army (Jaish al-Hur in Arabic).
There is no way to verify the authenticity of the images.

The insurgents of the leading faction Ahrar al-Sham deny that regime forces have advanced after the retreat of Islamic State of Iraq and as-Sham fighters from the front-line near Kuwaires airbase in Aleppo Province:

The Daily Star of Lebanon reports:

Yarmouk was originally a camp for Syria’s Palestinian refugees but has since expanded into a sprawling neighborhood in Damascus’ rebel-held southern belt. It has been encircled by troops loyal to President Bashar Assad since February.

On the second day of Ramadan, July 10, government forces tightened their grip on the area and sealed off a checkpoint that was the area’s only gateway to the capital, which was previously only sporadically open to allow through aid and fleeing residents.

The movement of food, medicine and people came to a complete halt.

“Civilians are totally forbidden from going out of the camp. At the same time, no food is coming in. They [the soldiers] have refused to let in vaccines for polio, measles, chickenpox and flu,” said Abdullah, an activist who has been stuck inside the neighborhood for over a year.

“We are surviving day by day.”

Thousands of people fled the neighborhood before the siege began, but activists estimate that around 20,000 remain trapped, subsisting mostly on one meal a day. But with stocks of dry food like rice and bulgur running dangerously low, even those meals often consist of grass and leaves.

Claimed footage of the aftermath of a Islamic State of Iraq a car bomb targeting insurgent in Tel Mardikh in Idlib Province:

Mirroring the rest of the social web, Russian social networking sites are buzzing with rumors of the fate and whereabouts of the ethnic Chechen ISIS Emir Abu Umar al-Shishani, with reports that he is leading a group of fighters in the battles against other insurgent factions.

The SHAM TODAY account, which claims to be run by pro-ISIS factions close to North Caucasian fighters in Syria posted this image of Umar: 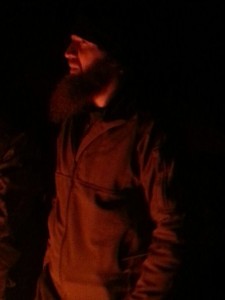 Video: The Defeat of Islamic State of Iraq in al-Dana

Orient News’s report on the withdrawal of the Islamic State of Iraq from al-Dana, the first town that it controlled in northwest Syria:

State media highlights a visit by Asma al-Assad on Thursday to a school, “surprising the students of basic education, sons and daughters of the martyrs, while they were taking their first semester exams”. 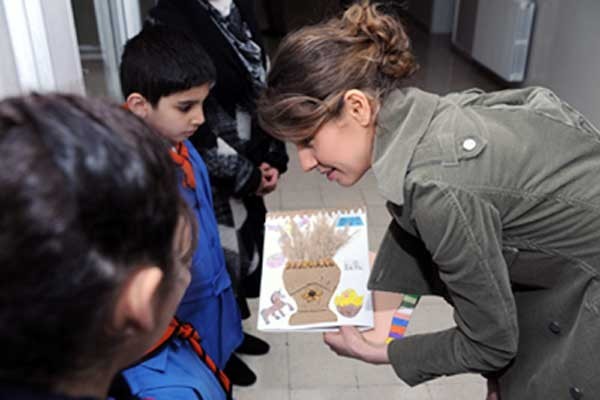 State news agency SANA’s photograph of the funeral for 17 people who were killed by a bombing in al-Kafat in Hama Province on Thursday — no group claimed responsibility: 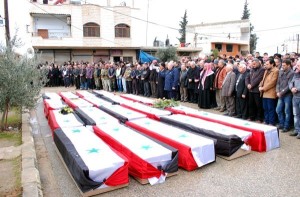