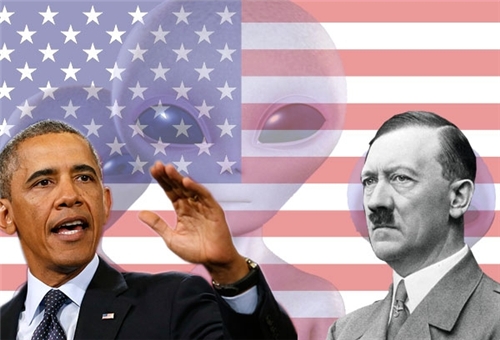 The story, along with other gems in the Iranian media such as “British Royal Family are Jewish“, raced through Western outlets such as The Washington Post, whose mirth gave way to the head-shake, “This is a reminder of how some hard-liners see the world.”

That’s a bit of a downer — and it’s not the full story.

You see, Iranian hard-liners did not launch the Snowden-US-Alien-Hitler theme. They only picked up on it.

Who are the ultimate propaganda masterminds? Fars is not shy in giving credit where credit is due:

A stunning Federal Security Services (FSB) report on the nearly two million highly classified top-secret documents obtained from the United States Department of Defense (DOD) run National Security Agency-Central Security Service (NSA/CSS) by the American ex-patriot Edward Snowden states that this information is providing “incontrovertible proof” that an “alien/extraterrestrial intelligence agenda” is driving US domestic and international policy, and has been doing so since at least 1945, Whatdoesitmean.com reported.

Now “Whatdoesmean.com” may not be at the top of your breakfast reading, but it claims that it is the “World’s Largest English Language News Service with Over 500 Articles Updated Daily”.

There are other UFO-themed revelations: “President Eisenhower Had Three Secret Meetings with Aliens”. There are dire warnings, “They Are Going to Come for You….Why Are You Helping Them?” — disappointingly, “they” are not aliens, but the “Police State”.

There are the stunning stories that somehow have been missed: “War Fears Rise After China Missile Tests Over Oregon“. There are the connections that other news organizations cannot or dare not make: “Obama Plan To Depopulate Montana Raises Crisis Fears In Moscow“. And then there is the downright confusing: “Obama Order To ‘Destroy Duck Dynasty’ Stunningly Revealed“.

That’s a pretty impressive list of scoops. So who is the journalistic mastermind behind “Whatdoesitmean”?

Disappointingly, there is little information on the “About” page, which is devoted instead to assurances “We will collect no personal information about you” (you know, like the Police State would).

Sorcha Faal has traveled and lectured extensively throughout the World, with her primary focus being the systematic structure of languages serving as a link between thought and sound, and as developed by Ferdinand de Saussure.

Sorcha Faal has further expanded her own research on ‘Linguistic Ordering’ with knowledge gained while a visiting researcher with Russian biophysicist and molecular biologist Pjotr Garjajev on the esoteric structure of DNA and its uses in explaining physic phenomena.

Impressive. But this work from semantics to molecular biology to theology does not quite get us to aliens and Hitler, let alone Chinese nuclear tests and the evil plans of President Obama.

A further quest for “Sorcha Faal” leads into a rabbit’s hole of in-fighting among conspiracy theorists — “There is no such person as “Sorcha Faal”, Russian academic/ “Sorcha Faal” is actually David Booth, an American computer programmer” — and a report from a “Sister Rebekah” on Whatdoesitmean:

I have known for some time now that I would end up being the one tasked with this most disgusting of assignments having to defend our Sorcha Faal against the most insidious attacks being leveled against her by the powerful anti-semitic forces in the United States and Canada, namely that she ‘doesn’t exist’ and is, in fact, Sister Rachal’s father, David Booth.

Perhaps it is a credit to Fars News that it has not been diverted by any worries about its source. That would only get in the way of other “exclusives”.

A grim memorandum circulating in the Kremlin written by Federal Security Services (FSB) Director Alexander Bortnikov to outline the new security measures throughout Russia, as ordered by President Putin after the deadly Volgograd terror attacks, warned that the Russian leader has, in effect, vowed to “destroy” Saudi Arabia as he is blaming Riyadh for this horrific crime against humanity.

For us, it’s a reminder that it is not “Iranian hard-liners” who bring us joy/worry/jaw-dropping astonishment with this conspiracy world-view.

Stand up, Kevin Barrett, author of “Truth Jihad: My Epic Struggle Against the 9/11 Big Lie” and regular on Iranian State TV: “How Are Takfiris and Zionists Alike? They think they are so much better than other people that they are justified in killing them…sometimes even eating them.””