Iran Daily, Jan 25: Military Commander “We Will Destroy US If It Attacks” 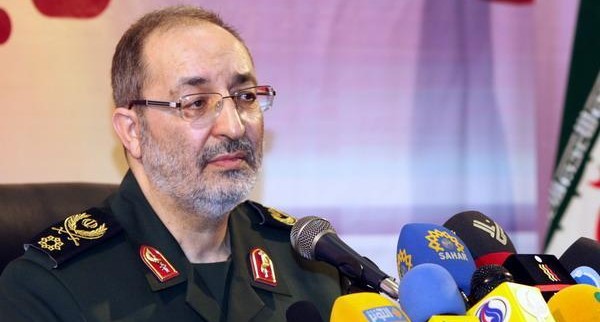 Iran’s military engaged in some tough talk on Friday, with the deputy head of the armed forces, General Masoud Jazayeri, saying US interests in the region will be “completely destroyed” in the event of any attack against the Islamic Republic.

Jazayeri was responding to US Secretary of State John Kerry, who said in a Thursday interview that if Iran did not carry out November’s interim nuclear deal, “the military option that is available to the United States is ready and prepared to do what it would have to do”.

Hossein Naqavi Hosseini, the spokesman for Parliament’s National Security Committee, said that the US was carrying out the threats because of Israeli pressure: “These statements are indicative of the US double standards and will bring about nothing but tarnishing the US image.”

Saeed Jalili, a leading hard-liner who ran for President in 2013, added his warning: “The enemy does not have the ability to oppose our domestic progress, and our peaceful nuclear technology will not be destroyed by the military option….The enemy’s greed will not make us retreat from the nuclear issue.”

Sunni Baloch insurgent group Jaish ul-Adl have claimed a deadly attack against Iranian security personnel in the village of Meer Jawe in the predominantly Sunni province of Sistan va Baluchestani.

Meer Jawe is right on the border with Pakistan:

According to a post on the group’s Facebook page, Jaish ul-Adl fighters ambushed IRGC forces in the town, and clashes ensued which lasted half an hour and left seven IRGC personnel dead and others wounded.

The claim, if true, is the latest in a series of attacks by Jaish fighters on Iranian security personnel in the Pakistan border region. There have also been claims that Iran has retaliated by shelling houses just across the border in Pakistan, thought to house Jaish militants.

A Twitter account linked to supporters of the group published this claimed image of some of the insurgents involved in the attack:

Karroubi, who founded the Party, was detained in February 2011 with Mousavi — who “lost” to President Ahmadinejad in the disputed 2009 Presidential election — and Rahnavard.

The Party’s appeal comes amid criticism by hard-liners of the “sedition” of Mousavi and Karroubi, who also ran in the 2009 election.

Well-placed sources in Iran indicate that, in return for getting the Supreme Leader’s support for an interim nuclear deal and future negotiations, President Rouhani has said he will not press the cases of the three detainees.

Rowhani to Foreign Investors: Inflation Below 10% Within 3 Years

Seeking foreign investment while at the World Economic Forum in Switzerland, President Rouhani has pledged, “We have gotten the rate of inflation under control and seek to lower it below 10% within three years by executing a comprehensive plan.”

Rowhani told companies and investors, particularly from the automotive and energy industries. “Different political and economic risks in Iran are in a state of decline, while the Iranian economy is dawning again. There are rare opportunities for lucrative investments in Iran.”

As evidenced by contemporary history, no country in the world is able to grow and develop a stable economy in isolation….My administration is determined to use this experience to upgrade its economic status in the world by making a more open and more competitive Iranian economy.