Iran: Basij Commander “We Shot at Protesters in 2009” 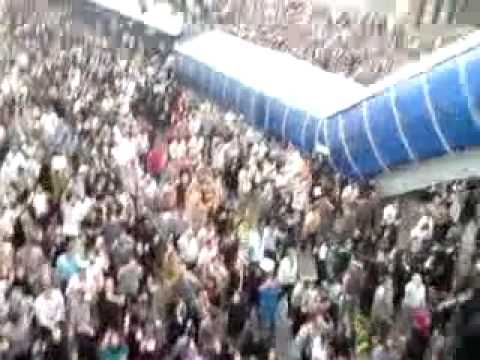 For the first time, a commander of Iran’s Basij militia has admitted shooting at protesters in mass demonstrations after the disputed 2009 Presidential election.

The former commander of a Basij base in Tehran, speaking to Basij Press, talked about gunfire in Azadi Square at the end of the march of millions on June 15, 2009. At least seven protesters were killed.

Among those slain were Ali Hassanpour, whose body was only given to his family 3 1/2 months later; Masoud Khosravi; and Mohammad Raeis-Najafi.

After Newsweek journalist Maziar Bahari gave footage of the incident to Britain’s Channel 4, he was arrested and detained for 3 1/2 months.

The commander insisted that his forces only shot at the legs of protesters to prevent them from entering the base on the Square: “I really believe that if the base had fallen and arms had fallen into their hands, the situation would have become like Syria.”

The commander said demonstrators had begun throwing rocks and Molotov cocktails at the windows. He claimed he grabbed his loudspeaker and urged the protesters to keep their distance from the base, but shots were fired by individuals who had positioned themselves among the crowd.

When protesters breached the walls of the base, “we were forced to defend ourselves, and some individuals who had entered the yard of the base were targeted below the waist, which caused the crowd to disperse”.

In 2010, the same commander had denied any gunfire by his force: “Shooting in the direction of people and killing those in the crowd is a lie. You can be certain that if we shot in the direction of the people — not seven people, but with that large wave of crowd — tens of people would have been killed.”