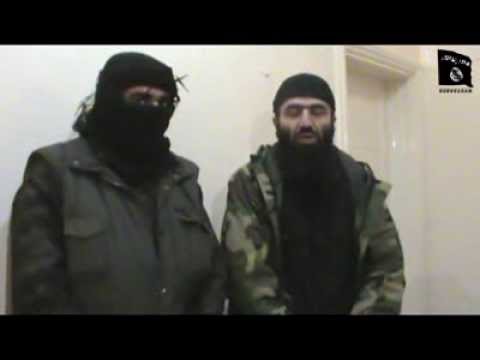 The site Usudusham, which is close to Seyfullakh, published this video footage on Sunday showing Seyfullakh (on the right) explaining the move. The man on the left is “one of the Amirs of Jabhat al-Nusra”, according to Usudusham.

Seyfullakh says that Allah has seen fit to unite the ranks of the Mujahideen, and strengthen their love for each other:


Seyfullakh was previously the second-in-command of Chechen jihadi Umar al-Shishani, when the two led the Jaish al-Muhajireen wal Ansar jamaat (JMA), based in Aleppo and operating in northern Syria. However, Seyfullakh split from JMA following JMA’s involvement in the fight for Menagh Airbase in Aleppo, when Umar accused him of takfir and corruption.

It appears, however, that the split was largely an ideological one. During the fight for Menagh Airbase, Umar worked closely with the Islamic State of Iraq and ash-Sham (ISIS), and was later appointed as Amir of that group’s northern operations. Seyfullakh believed that JMA should remain independent and not work closely with other groups.

Following the split, Seyfullakh formed his own jamaat, JKI, alongside another charismatic Chechen fighter with extensive battle experience, Abu Muslim Shishani. (It was Abu Muslim’s men — and not JMA, as media reports have erroneously said — who fought in Latakia province and captured Alawite villages.)