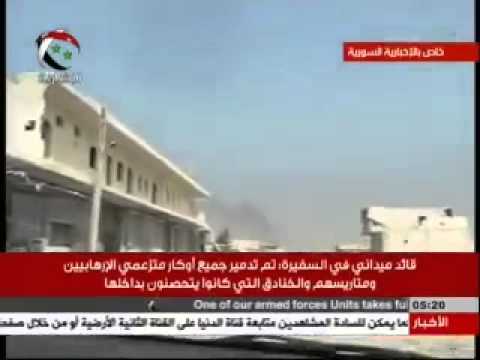 Last month, regime forces won a notable victory when they captured as-Safira, a city of about 100,000 people east of Aleppo. The advance opened up a supply route to besieged regime-held areas in Syria’s largest city, as well as to other positions of the Syrian military in Aleppo Province such as Kweiras airbase.

Now it appears that insurgents are counter-attacking. The Shaam News Network reports a series of operations and clashes overnight in and near as-Safira.

The outlet claims opposition forces targeted regime positions in as-Safira with Grad rockets as a “few” insurgents snuck inside the city. The Syrian military responded with artillery fire.

Shaam asserts that regime forces planted explosives in the residential area in the west of as-Safira to protect ammunition factories. It also says Syrian warplanes dropped barrel bombs in nearby rural areas.

State media’s report of the capture of as-Safira last month:

State news agency SANA reports, from a “source at Aleppo Police Command”, that 17 people were killed by mortar shells fired by insurgents on residential areas in Aleppo city.

The source said that the shells fell in the areas of al-Fourqan, al-Meridian, al-Fayd, al-Jamiliye,and Bustan Kul Abb. Judge Nasser Ahmad Mshalleh, an Aleppo Justice Department Prosecutor, was among the dead.

The attacks injured 30 people, 9 of them critically.

Insurgent faction Ahrar al-Sham have issued a report via their website about the Islamic Front-led storming of the al-Kindi Hospital in Aleppo. The hospital had been taken over by regime forces and used as an army base.

Ahrar al-Sham write that the Islamic Front, Jabhat al-Nusra and Fajr ash-Sham al-Islamiya led the storming of al-Kindi, which resulted in a large battle with regime forces. The insurgents targeted areas of the hospital in which there were large concentrations of regime forces, using tanks and heavy artillery. A car bomb detonated next to a wall created an entry-point for the insurgents, who managed to take part of the hospital.

Insurgents continuing their campaign in the ancient Christian town of Maaloula in Damascus Province — reports earlier this week indicated that opposition fighters have taken over the center and are enduring shelling by the regime:

Sources say that 12 nuns and three who were trapped in a Maaloula convent by fighting and shelling have been evacuated to another town. The Syrian regime had claimed that they were “kidnapped” by the insurgents.

A video announcement made by the Islamic Front announces the start of an operation to liberate the Kindi Hospital in Aleppo (click to see map of location). The hospital is being used by regime forces as a barracks, and is no longer serving as a medical facility.

In another video, the Islamic Front say they are using a new remote control sniper system to attack Assad’s forces in Aleppo:

Information Minister Omran al-Zoubi has repeated that President Assad will not step down from power, even for an international “peace” conference in Geneva:

If anyone thinks we are going to Geneva 2 to hand the keys to Damascus over [to the opposition].

The decision rests with President Assad. He will lead the period of transition, if there is one. He is the leader of Syria….And he will remain the president of Syria.

An article in The Wall Street Journal indicates that the US, after more than a year of backing the Syrian National Coalition and Supreme Military Council, has established contact with the newly-formed Islamic Front — made up of seven leading factions in the insurgency:

The U.S. and its allies have held direct talks with key Islamist militias in Syria, Western officials say, aiming to undercut al Qaeda while acknowledging that religious fighters long shunned by Washington have gained on the battlefield….

The Saudis and the West are pivoting toward a newly created coalition of religious militias called the Islamic Front.

The article is misleading in its framing of the Front, failing to note that it is likely to link with the Islamist faction Jabhat al-Nusra. It has value, however, in its revelation from “a senior US official”:

The ascendancy of these militias spurred the Obama administration to authorize a senior U.S. envoy to meet with Islamist groups that aren’t on State Department terrorist lists.

The American outreach does not appear to be geared to support of the insurgency’s fight on the battlefield. Instead, “Western officials” say it seeks “to persuade some Islamists to support a Syria peace conference in Geneva on Jan. 22”.

The Syrian National Coalition has said that it will not go to the conference unless it has support from insurgent factions.

So far, the seven groups in the Front have opposed any “peace” conference, seeking instead the overthrow of President Assad and his inner circle.

Syria’s Ambassador to the United Nations, Bashar al-Jaafari, has claimed that Saudi intelligence is freeing prisoners — sentenced to death or to life imprisonment — to fight in the Syrian insurgency.

“The Saudi authorities release those criminals, the majority of whom are affiliated to extremist, terrorist organizations like Al Qa’eda, to send them to Syria through hidden agreements through which they are given amnesty in return for their travelling to Syria to kill the Syrians,” al-Jaafari said.

He added that “terrorists” enter Syria across the Jordanian and Lebanese borders while others come through Turkey with assistance from Turkish and Qatari intelligence services.