Russia: Lavrov — “All Syrian Patriots Must Unite to Fight Against Islamic Front, Jihadists, and Al Qaeda” 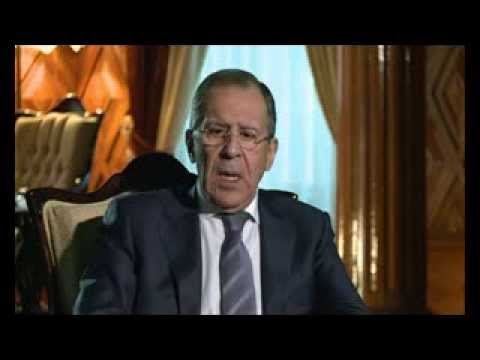 In the interview, Lavrov talks about whether Iran should be present at the Geneva II peace conference, and says that the newly-formed Islamic Front is an extremist group with ties to Al Qaeda, and poses a threat to the future of Syria. The Russian Foreign Minister says that “Syrian patriots” must unite with the Assad regime to help expel the Islamic Front, Jabhat al-Nusra, the Islamic State of Iraq and ash-Sham and other “terror groups”, to return Syria to a multi-religious state.

Let’s switch to another historic event. I’m referring to the Syrian problem. Right now, there are active preparations for the Geneva-II conference, which should take place next year. One of the key questions is whether Iran will participate. In the light of your talks with your Iranian colleagues, and the preparations for the conference, is there a good chance that the undertaking will once again be postponed? Will Iran take part? And who will take part from the Syrian opposition.

This is a very correct and very complicated question. In the first place, Geneva II has been repeatedly postponed. As you recall, the initiative was launched on May 7 this year, when the US Secretary of State John Kerry was on a visit to Moscow. Since then, we have met many times and each time we have discussed this conference, among other issues. Of course, we have a common understanding that UN Secretary General Ban Ki Moon should declare the terms in agreement with his special envoy to Syria, Lakhdar Brahimi. However, everyone knows that we have discussed and will discuss the issue of timing with the Americans, because they must not be artificial but such that all parties would be ready to go to Geneva and start a serious discussion.

Soon after May 7, we got the consent of the Syrian Government to send a delegation to the conference, and it very recently reconfirmed that commitment. There are very contradictory signals coming from the Syrian Opposition; sometimes their leader says they have decided to go, then his deputy says there’s no point in going, until they achieve military superiority “on the ground”. Or another example: at first the Opposition announced that there would be no preconditions, and again the leader of the so-called “National Opposition” said that the “Friends of Syria” had met several months ago in London and had formed a support for the National Coalition that it would support regime change at the conference. These are precisely the preconditions that should not exist. The conference should have a single agenda: namely the communique adopted last June in Geneva, which states that all issues relating to the future of Syria should be decided by the Syrian people themselves in negotiations between the Government and all sectors of the Opposition, on the basis of general agreement. And all external players should encourage Syrians toward that end.

Obviously, the situation is complicated . We certainly support the efforts that the Americans have taken to persuade the Opposition to attend the conference without unacceptable preconditions, and we are working not only with the Syrian Government but with all the Opposition, including the National Coalition.

Representatives of the opposition have been invited to Moscow, and many of the the leadership came. Now we have invited the National Coalition, and its leader Mr. Jarba stated that he would come. Dialog with them is still necessary. But alongside attempts by sponsors of the National Coalition to paint it as the main force representing all opponents of the regime in the negotiations, this is “main force” is actually starting to crumble. There have been statements (we want to check them) that the Muslim Brotherhood part of the Syrian National Coalition declared they will have their own special campaigns, that had either come from (the Coalition), or had become separate. There were reports that the militias of the so-called “Syrian Free Army” have for the most part ceased to submit to the National Coalition. Assuming, of course, that they ever did obey the Coalition.

According to very recent information (which, incidentally, has been confirmed) , some twenty-odd groups have united as the “Islamic Front”. This organization does not recognize the “Syrian Free Army” or the National Coalition or al-Qaeda. However, it is formed from groups who are very close ideologically: Jabhat an-Nusra and the Islamic State of Iraq, and as they say, the Levant” — the most extremist of the jihadist groups, which operates in the spirit of al-Qaeda. This “Islamic Front” announced that its goal is to create an Islamic Caliphate in Syria and, as they say, in the “greater Levant”. There are conflicting reports about who finances the structure. All of this we intend to clarify.

On December 20 in Geneva, there will be the next and, as we expect, the final preparatory contact between us, the Americans, and the UN, with the involvement of other permanent members of the UN Security Council, the Arab League and Turkey. However, all these issues need to be clarified, because we are told that the National Coalition will represent everyone… And at the same time, other political opponents of Assad, who are not emigres but those who have always lived and continue to live in Syria — the National Coordinating Committee and The Supreme Council of the Kurds of Syria — they also do not agree with the leadership of the National Coalition because they do not agree with what they feel are the (Coalition’s) very extremist position. All this needs to be dealt with.

For us there is only one reference – Security Council Resolution No. 2118, which endorsed the process of chemical disarmament in Syria. That is in full swing, and there will not be any serious disruptions. This resolution also endorsed the convening of Geneva II, stressing that the dialog should include representatives of the entire spectrum of Syrian society. Therefore, we need to make sure that the whole opposition is represented at a decent level, rather than a single structure, over whose capacity there are big questions, given the confusion and vacillation within it, as well as differences among its members when it comes to Geneva II.

You listed the most capable groups, who are terrorists and who constitute a major force, the so-called armed opposition. Will Geneva discuss the fight against terrorism? After all, the groups you mentioned form part of international terrorism. The same Jabhat an-Nusra is an Al-Qaeda cell in Syria. Will Geneva decide how to deal with these groups?

I think this will be the main problem. Not least because, when the Geneva communique was formed in June 2012, it was already clear that, along with the Syrian opposition, which was rooted in Syrian soil and which was dissatisfied with the Syrian regime for whatever reason, there were more and more foreign fighters in Syria, jihadists who begin to fight everyone, against the regime and its opponents, trying to take some territory and declare Sharia Law. It was a phenomenon very limited in scope, and not put forward as the main task, which is to stop the bloodshed and prevent the Syrian people falling into a catastrophic abyss with millions of human lives caught up in humanitarian crises and disasters, etc.

Now, a year and a half after the acceptance of the Geneva Communique, and a little less than a year since initiatives began to convene a conference, more of our interlocutors, including Western partners, tell us candidly in confidential talks that the main threat is not Bashar al-Assad, which was what they were saying publicly until recently, but rather the threat that jihadists will seize Syria and other vast areas in North Africa and the Middle East, and that international terrorists will establish their order and authority there….

It is not a coincidence that, four months ago, the G8 at the summit in Lough Erne made a declaration in the section on Syria (…) to the Government and the opposition to unite and expel terrorists from Syrian territory, and fight together against them. Moreover, this passage was included in the declaration at the initiative of the summit’s host, British Prime Minister David Cameron. Now, when we discuss current issues relating to the convening of the conference and its agenda with our Western partners, we have always placed this issue first and we say that everything must be done to create a battle-worthy alliance of the Government and the patriotic opposition against the terrorist interlopers who flock to Syria from around the world, as to a tasty morsel, to implement their malicious plans.

By the way, statistics more and more point to the fact that Jabhat an-Nusra, the Islamic State of Iraq and ash-Sham, and other groups are already “scrapping” with each other. There are skirmishes, capturing settlements. For example, somewhere a Muslim Brotherhood village was invaded and other jihadists who do not share their radicalism, want to establish their own rules there. It goes without saying that there are regular clashes between jihadists and the government, between the jihadists and the “Free Syrian Army”.

Thus, conditions are such that all the Syrian patriots must understand what is more important: to fight on the side of those who want to turn Syria into a caliphate, or unit and return the homeland to that which she was famous for centuries, namely – a multireligious, multiethnic, secular state in which everyone lives together comfortably. That theme must be one of the main issues discussed at the Geneva conference.