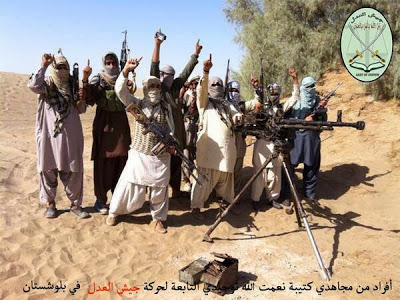 The Sunni Baloch insurgent group Jaish ul-Adl (JUA) has claimed responsibility for an attack this morning against IRGC personnel in Saravan, in Sistan Baluchestan.

The attack is the most recent of several the group have claimed against IRGC forces in the predominantly Sunni province.

Map showing Saravan, near the border with Pakistan:

JUA said that the Mollazadeh Molavi Abdelmalik Brigade was responsible for the attack, carried out using a roadside bomb detonated by remote control. The attack targeted car driven by IRGC personnel and according to JUA killed several, including a senior officer from the Engineering Corps. JUA said it carried out the attack at 7:30 a.m. on Wednesday.

JUA said that its continued operations were in response to the oppression of the Baloch and Arab people by Iran, saying that the Mujahideen vowed to fight even harder against the Iranian regime.

JUA also said that its actions were revenge in response to Iran’s and the IRGC’s “crimes” in the Syrian conflict against the oppressed people of Syria. The group vowed to continue to attack the IRGC, in “explosions that will shake Tehran” until it ended its actions in Syria.

JUA called on “jihad fighters” to join in and help it, saying that these attacks are the only way to deal with the remaining “war criminals” of the Safavid Dynasty — a reference to the rulers of the Persian Empire who established the Twelver School of Shia Islam, after the Muslim conquest of Persia.