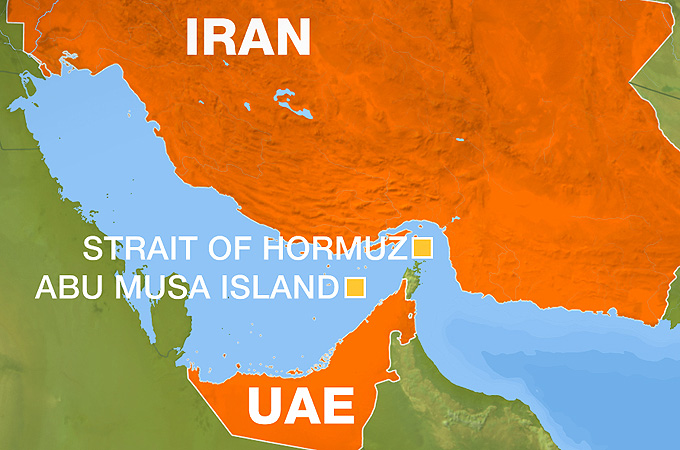 Rouhani Government to Ahmadinejad: No Debate
Has Billionaire — and Ahmadinejad Ally — Zanjani Been Arrested?

The Rouhani Government has continued its engagement of Gulf States, with Foreign Minister Mohammad Javad Zarif visiting the United Arab Emirates on Wednesday after discussions earlier this week in Kuwait and Oman.

Zarif met Emirati President Khalifa bin Zayed bin Sultan Al Nahyan in Abu Dhabi. He declared afterwards, “The Islamic Republic of Iran has always taken steps in line with the welfare and interests of regional countries and emphasizes the establishment of peace, stability and balance.”

Iran’s diplomatic offensive after the interim deal over its nuclear program on November 24 began four days later with a visit to Tehran by UAE Foreign Minister Sheikh Al Nahyan.

President Rouhani and his mentor, former President Hassan Rafsanjani, have both promised better relations with the Gulf States, including Saudi Arabia.

Trying to assuage any Saudi fears over Iran’s nuclear agreement with the 5+1 Powers, as well as tensions over regional issues such as the Syrian conflict, Zarif said this week that he soon hopes to visit Riyadh.

“Iran has all respect for the vision of the sultan, which takes Omani-Iranian relations to top levels,” Larijani said after his meetings with Qaboos and other leading Omani officials.

Rouhani Government to Ahmadinejad: No Debate

The Rouhani Government has brushed aside former President Mahmoud Ahmadinejad’s challenge to a debate over economic matters.

Ahmadinejad wrote a letter this week calling for the debate, saying that Rouhani had wrongly accused him of mismanagement during his eight years in the Presidency.

A Rouhani advisor initially said they would consider the encounter if Ahmadinejad was “honest”. However, advisor Mohammad Bagher Nobakht has now said:

We do not have time for these talks. All friends are active all the time and it is possible for some to have more opportunity. We will not be involved in these discussions, but the possibility of criticizing the administration is provided for all normal citizens.

Has Billionaire — and Ahmadinejad Ally — Zanjani Been Arrested?

Political and legal pressure upon billionaire Babak Zanjani and his business activities is increasing.

Zanjani is the central figure in a report by The Investigation and Inspection Panel of corruption and embezzlement in the Social Security Organization, reviewing 178 companies involved in its activities.

The report found there were significant issues with staffing, with “4,100 positions of executive board members that are managed by only 1,500 individuals”, and bribery that included “gifts to 37 MPs.”

A member of the investigating Panel linked the issue of board members to Zanjani’s mis-use of funds, “To import the monies that he owed the Oil Ministry, Babak Zanjani pursued an organization that was outside of sanctions and could import the money, totaling about $2 billion. Based on the reviews he had conducted, he reached the conclusion that if it is an organization related to retirees he can do this. However, this agreement had no practical legal basis, and an agreement that was signed had to have the approval of the board of trustees.”

Following the report, the Vice-Chairman of the Parliament Mohammad Hassan Abu Torabifard indicated possible prosecution of Zanjani, saying Parliament will refer those named in the report to the judiciary.

The Rouhani Government indicated in September that Zanjani was suspected of diverting $1.9 billion. Sources have told EA that he has already been discreetly placed under arrest.

The publication Tabnak has posted documents which it claims implicates not only Zanjani but also Saeed Mortazavi, the former Tehran Prosecutor General and Ahmadinejad advisor who was implicated in the killings of protesters in Kahrizak Prison in 2009.

The 39-year-old Zanjani, who started his business career selling sheepskins, has faced other problems this year because of US-led sanctions. His accounts were frozen by the US Treasury in April and he was blacklisted by the European Union.

Zanjani claimed in September that he was helping the Government sell oil, while using his holding company of 64 firm to assist Iranians in the transfer of billions of dollars from outside the country.