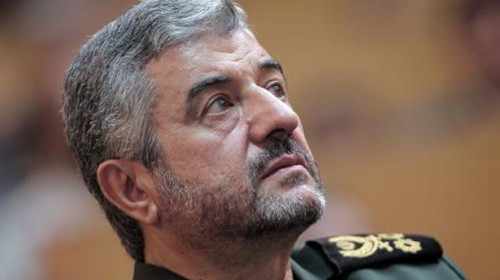 Amid the continuing diplomacy over the interim nuclear deal signed last month, the Revolutionary Guards did a bit of chest-thumping — and challenged Foreign Minister Mohammad Javad Zarif — on Tuesday.

If today, the enemy…strikes us with thousands of bombs via a large number of sorties, [only] 10 to 20 percent of the IRGC’s missile capability might be destroyed. Furthermore, the IRGC’s military might is not limited to its missile power, but it is a strategic power for the [Islamic] Establishment.

Jafari’s statement followed Zarif’s alleged remark that the US could take out Iran’s defense system owith a single bomb.

The commander said the Foreign Minister’s remarks are “incorrect”: “We consider him a seasoned and experienced diplomat, but he has no experience in military affairs and this is why he has made this remark.”

Jafari explained that the Guards’ missiles can reach Israel.

He added that Iran’s restraint meant the US and Western Europe were beyond Iranian strikes: “We can still upgrade the range of missiles, but for the time being, on the order of the [Supreme] Leader, we have limited the range of our missiles to 2,000 kilometers.”

The International Atomic Energy Agency and Iran held a “productive” meeting over Tehran’s nuclear activities on Wednesday and will have a new round of talks in Tehran on January 21, the two sides said in a joint statement.

Iran said before the meeting that it will set a date for the IAEA to inspect the Gchine uranium mine for the first time in eight years.

The inspection of Gchine was among six points agreed between the two sides last month.

Technical talks between Iran and the 5+1 Powers on the interim nuclear deal have been extended to Wednesday.

Iran’s Ambassador to the International Atomic Energy Agency, Reza Najafi, said the meetings in Vienna have been “satisfactory”.

The two sides are discussing implementation of Iran’s suspension of enrichment of 20% uranium in return for the lifting of some US-led sanctions.