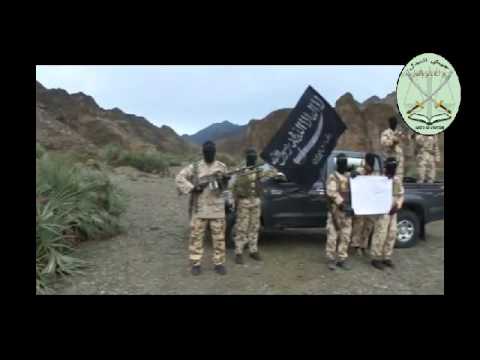 The Sistan Baluchestan-based Sunni Baloch insurgent group Jaish ul-Adl claimed responsibility this week for another attack against Iranian security personnel in the predominantly-Sunni province, and warned Tehran there would be more to come unless it ended its “crimes against the oppressed peoples of Iran and Syria”.

If Iran did not stop, Jaish ul-Adl warned that its “day to day operations would increase” and the group would “burn all the military regime in Balochistan”.

Despite the local nature of the Sunni Baloch insurgency in Sistan Baluchestan, the fact that the group takes care to specifically mention Iran’s involvement in Syria in its warning indicates that at least some of Jaish ul-Adl feel that their cause extends beyond Iran and Baluchestan, and that it is part of a wider, sectarian Sunni struggle against oppressors.

In its latest post on its Persian-language blog, Jaish ul-Adl talk about their cause as “jihad” and describe their fighters as “mujahideen”.

Jaish ul-Adl say their aim is to protect the honor and dignity of Muslims, and that the way to do so is to join the Mujahideen.

The group also warns that it is ready to train young people so that they can join the jihad.

The group say that the attack took place near the town of Rasak in Sarbaz County, close to the border with Pakistan. Jaish ul-Adl say that the Shahid (Martyr) Molavi Abdolmalek Brigade planted mines around 5 kilometers outside Rasak, to target a military vehicle.

Despite Jaish ul-Adl’s attempts to situate its cause within a transnational jihad, the group is still very much a local movement, comprised of local fighters organized into brigades with local names.

The Shahid (Martyr) Molavi Abdolmalek Brigade is named after the son of the most prominent Sunni cleric in Iran, Molavi Abdolaziz, and was gunned down outside his home in Karachi, Pakistan on March 4, 1996.

The same battalion has claimed responsibility for several other attacks this year, all against military vehicles around Sarbaz.

On February 26, Jaish al-Adl announced that the battalion had killed four IRGC forces and severely injured three others by destroying a vehicle belonging to “Mersad forces.”

On March 25, the battalion carried out a similar operation against three IRGC vehicles leading to several other IRGC deaths. In a March 27 statement, Jaish al-Adl wrote that, “Islam devotees have targeted a vehicle carrying members of the regime’s IRGC on Hamzeh Street. Several criminal IRGC members were killed during this attack and several others were injured.”

On September 3, the battalion killed and injured several Iranian police officers in a police patrol group in Sarbaz, saying in a statement that those targeted were “were well-known criminals in the region and did nothing but to mistreat and abuse people”.

Apart from a being a reaction to reports that Iranian security forces are involved to some degree in the Syrian conflict, by training and fighting with pro-Assad Shia militias, the attempts by Jaish ul-Adl to situate its cause within the transnational jihad movement may also be an attempt to attract support — including funding — from external actors.

This recent footage, published this week, is a propaganda video for Jaish ul-Adl. Notably, it is in Arabic, rather than Persian, so that it is accessible to (and aimed at) an Arabic-speaking audience.

The video shows Jaish ul-Adl fighters being formed into four brigades. The insurgents are shown posing wearing combats, with black, jihadi flags and weapons. They shout in Arabic, “Takbir” and “Allahu Akbar”. The background music to the video is also in Arabic, not Persian.

Supporters of Harakat Ansar Iran, the second Sunni insurgent group in Sistan Baluchestan, have produced a large amount of propaganda material in Arabic, and have used social media in Arabic to openly ask for support. The group’s leader has also appeared several times on Saudi cable channels to make appeals for the Sunni insurgency.